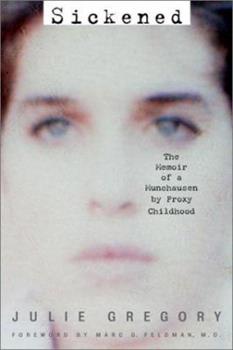 Sickened: The Memoir of a Munchausen by Proxy Childhood

A young girl is perched on the cold chrome of yet another doctor's examining table, missing yet another day of school. Just twelve, she's tall, skinny, and weak. It's four o'clock, and she hasn't been allowed to eat anything all day. Her mother, on the other hand, seems curiously excited. She's about to suggest open-heart surgery on her child to "get to the bottom of this." She checks her teeth for lipstick and, as the doctor enters, shoots the girl...

This book made me sad

Published by Kenz , 1 year ago
It's sad because it's true and a lot of children suffer at their hands of their mothers because of this. Munchausen syndrome needs to be more widely talked about.

Terrifying Because It's Real

Published by Thriftbooks.com User , 17 years ago
Julie Gregory was abused as a child. She was abused in one of the most undiscussed ways a child can be violated. Julie was the victim of her mother's mental illness. Her mother suffered from Munchausen By Proxy Syndrome. Julie's mother, Sandy, would feed 3-year-old Julie books of matches and tell her they were lollipops. She would give Julie pills that caused blinding migraines, all the while, taking Julie from doctor to doctor insisting Julie was seriously ill. At the height of her illness, Sandy was trying to have open-heart surgery performed on 12-year-old Julie. And when Julie tried to tell a nurse and her school friends what was happening, no one believed her. Julie and her brother also endured physical abuse. They were beaten and Julie was constantly starved to make her appear ill. "Sickened" is Julie's heartbreaking, but uplifting story. I was appauled and horrified by the treatment that Julie suffered. I cannot imagine what it must have been like to live with the knowledge that there was nothing wrong with you, but you were at the whim of a deranged mother. This book was an amazing tale of courage and spirit. If you are an abuse survivor, this book will be very hard to read, but it is definitely worth it. I highly recommend this work.

Published by Thriftbooks.com User , 17 years ago
We often ask ourselves "what would make someone act like that?" when we see a mentally or emotionally disturbed individual acting out in abusive ways. However, we rarely ask what the effect will be on the child of such a person. "Sickened" is a book that answers that secondary question under the most brutal of emotional circumstances in which a child does not know they are being abused, in fact they are taught to believe they are being guarded. I cannot do justice to describing the disease depicted in the pages of "Sickened," I leave that to the author. But the short line depiction is that a parent subjects a healthy child to a lifetime of believing they are chronically sick, and the emotional scars that ensue. Readers will most equate "Sickened" with "My Fractured Life" and "Nightmares Echo" in the depiction of both the abuse of parents upon their children and the long lasting affects thereof. The capture point that creates such an inherent bond with the reader is that these authors employ a literary approach of memoir reflection and storyline flow, steering away from clinical analysis and statistical data. The openness draws us in, the raw ness hypnotizes. The experience is life changing.

Published by Thriftbooks.com User , 17 years ago
Munchausen syndrome is a psychological disorder in which the caregiver, often the mother, subjects her child to harm or a fabricated illness to get gratification. Julie Gregory, tells her story so vividly that at times a reader must remind themselves that this is a memoir and not just a story that a little girl concocted in her sleep. The way that Gregory describes the test done on her is bone-chilling (especially the scene where she is in the hospital and the nurse comes in to prep her for surgery). While most of the experiences connected with the mother carry a serious tone the father on the other hand provides comic relief in the first quarter or so of the book (Gregory often places the father on the couch watching Green Acres reruns) and the brother provides a reminder of innocence in the book as well. Gregory's story is also an inspiring one given that most victims of Munchausens don't live into adulthood. This story ranks in the top ten on my abuse and inspirational stories lists.

Published by Thriftbooks.com User , 19 years ago
This is the saddest book of child abuse I have read sinceChristina Crawford wrote " Mommie Dearest " a quarter of acentury ago.It was written by Julie Gregory so eloquently,I could not put it down. Julie's mother convinces her, that she ( Julie )is aninvalid and must take medications like attenlol 25mg.,forher heart.The medications make Julie feel sick and tiredmost of the time.Sometimes the dose is doubled according toher mother ((Sandy's) whim.This is what Munchausen by Proxyis about.A caretaker,in this case the mother makes a helplesschild suffer, in order to garner attention for herself andhave re-affirmation from a Doctor in authority. It is the worse scenario of child abuse,because it goesunrecognized. The father,who has been diagnosed as schizophrenic,doesnot allow the mother to refer to their son,several yearsyounger than Julie as sickly,and nearly kills her the onetime she mistakenly does.This saves Danny some abusiveness.The children witness these savage fights. The family lives isolated in a trailer with concrete wallsand additions.The mother takes in veterans and fosterchildren,thereby making money for herself and wastes it onpairs of hundreds of shoes,for herself and lifesizeceramic animals for the trailer. The foster chidren are mistreated, and the mother encourages Julie also to physically hurt them-but Julie has human feelingsand only pretends to.Her Mother thinks this will bind Julie toher,making them closer. Julie has no girlfriends,and the one time she did confidein a new friend,the results were disastrous.Her new frienddid not believe her and dropped her after telling mostof Julie's classmates, that Julie made up stories. By this time, Julie has reached her teen years.Her mothercontinues to make sure she is sickly,and has had a heartcatherization performed on her.Sandy, then convinces a physician to do a deviated septum repairof the nose and to shape it less Roman.In other words,repair the septum,so she can breath, then for no reason improve her nose structure. Deviated septum repair is more painful than most peoplerealize.People used to be hospitalized four days and it was a last resort for polyps and painful sinusitis. Most people decline having it done,when the procedure is described tothem. I almost stopped reading at this point,but continued,after checking the picture of Julie on the back flap of herbook. I did this several times to re-assure myself,that Juliesurvived her horrendous childhood. There is a great deal more to the story,but suffice it to sayJulie survived this horrible Munchausen by Proxy. Through,educating herself,and staying away from the woman who was her mother,Julie states,she rose like a Phoenixfrom the ashes.After much time and therapy,she checks outMama again, to convince herself,to look for change, forapology? Sandy,her mother,has adopted two children in Montana.Nothing has changed but location. Julie bravely saves their lives armed with her childhood files and evidence fro
Trustpilot
Copyright © 2022 Thriftbooks.com Terms of Use | Privacy Policy | Do Not Sell or Share My Personal Information | Accessibility Statement
ThriftBooks® and the ThriftBooks® logo are registered trademarks of Thrift Books Global, LLC