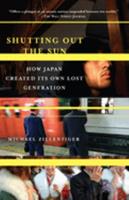 Shutting Out the Sun: How Japan Created Its Own Lost Generation

The world's second-wealthiest country, Japan once seemed poised to overtake America as the leading global economic powerhouse. But the country failed to recover from the staggering economic collapse of the early 1990s. Today it confronts an array of disturbing social trends, notably a population of more than one million hikikomori : the young men who shut themselves in their rooms, withdrawing from society. There is also a growing numbers of "parasite...

Published by Thriftbooks.com User , 14 years ago
A back cover blurb calls Michael Zielenziger's book a "trenchant investigation." I think it's right on the mark. It's an invigorating mixture of shoe-leather reporting, social science and essay. Despite the title and initial focus on the 'hikikomori' phenomenon, the author makes informed observations and eye-opening conclusions about the country as a whole. It's a good companion piece to Alex Kerr's Dogs and Demons: Tales from the Dark Side of Modern Japan, a seminal look at the lack of accountability in the Japanese system. I found myself dog-earing page after page. I especially liked Zielenziger's reporting on Masahisa Okuyama, the founder of the very un-Japanese-like KHJ, a support group for families of hikikomori. Zielenziger relates that Okuyama believes that only foreign pressure (applied by people like the author and this book) "will force Japan to seriously confront its own societal dysfunction." Okuyama likens Zielenziger and his fellow journalists to Commodore Perry and says "You foreign journalists are the most important black ships. We need more black ships." On a grander scale, Zielenziger describes a country "careen(ing) off course precisely when the age of information, intelligence and flexible global production utterly disrupted a more rigid industrial order." Exactly. Remember when the Japanese model was one that struck fear into the hearts of businessmen around the world and it was held out as something to emulate? So much for the that - the author vividly describes a new world order in which country after country leaves Japan behind. Of special note are a couple of excellent chapters comparing South Korea to Japan - of that country's day of reckoning with its IMF-induced chaebol defaults of the late 1990s and its people-induced transformation since then. Why could Korea accomplish what Japan could not? Zielenziger - a self-professed 'secular Jew' - builds a credible case that it's due to the deep roots of Christian faith in South Korea. I spotted one whopper of an error in this otherwise excellent book - identifying an Enron protagonist as 'Jeffrey Fastow' (merging Jeff Skilling and Andy Fastow) - see p. 101 of the paperback. Additionally, when writing of South Korea's '386 Generation,' Zielenziger assumes they're named as such due to their technical savvy, i.e., that the moniker refers to Intel's processor. While it's a play on that, the '386' number is a formula referring to those Koreans who were in their 30s when president Roh Moo Hyun was elected (the '3'), went to university in the eighties (the '8'), and were born in the sixties (the '6').

So--how much trouble are they in--and can it be fixed?

Published by Thriftbooks.com User , 15 years ago
No doubt about it: Japan is in trouble. Zielenzinger takes the hikikomori as a metaphor for what ails the country. The hikikomori are those people who have retreated from society, many having never left their homes for decades. Frequently, they were driven into retreat because they were bullied in school. Bullying is epidemic in Japanese schools, where anything that makes an individual stand out is ruthlessly attacked by the other children. So why does Japan have so many hikikomori? Why doesn't society do more to help them, or stop the bullying? Why are alcoholism, loneliness, and suicide such hallmarks of their society? Zielenziger find many intriguing answers. "In conversations with Japanese historians, sociologists, psychiatrists and other social thinkers, I was struck by how often they highlighted the absence of monotheism in Japanese culture as an important element distinguishing their society from a Western one." ( p 128) It was Jewish/Christian religious beliefs that led to the idea that there was one truth, and that an individual was honor bound to find and fight for that truth. Contrast this to Japan, where virtue "is whatever a person with power in a given situation...thinks is 'good'" (p 125). "The Japanese decide right from wrong by relying on context--on 'everyone's opinion'" (p 126). Individual conscience, a quest for truth, and the individual as a person with human rights, are central only to Western civilization, and only because of religion. That is why a person with an accident will be ignored by busy Japanese nearby, and why the homeless in Japan must be cared for, not by any Japanese agency, but by Korean Christians. Instead, Japanese society is based upon the mother-child relationship. The politician in charge, the boss over you--all are owed the sort of obedient and unquestioning respect of a child to his mother. If the parent is wrong, the child is helpless, unable to correct the parent. So if the chief scientist in a lab is a fool, the lowly lab assistant can only endure, and never try to correct the person in charge. All of this stands in sharp contrast to Korea, a nation so similar to Japan, yet so breathtakingly different today. It remains to be seen if Japan can take the path Korea has.

Published by Thriftbooks.com User , 15 years ago
Having grown up with a mother who strongly believes that all living beings possess the "will to become", this is an interesting look into what happens when "becoming" is culled from a society. It appears that staunching this process results in an implosion/explosion of the human spirit, which the general public in Japan largely refuses to recognize. This book is amazing.

Published by Thriftbooks.com User , 15 years ago
This is a book which takes a microscopic look at Japan and its many problems which are unique to Japan, like the Hikikomori youth. The author who lived in Japan for several years writes with an insider's view. He thinks that the Japanese society has been isolated both geographically and intellectually and while the Japanese may take fancy to the luxuries of the west, he points out that innovation and independence are qualities that they choose to ignore. Zielenziger has a good sense how to make a book interesting and he does that by his sharp powers of observation, he has a good knowledge of history and uses it to make his book readable like a story than a country report. This is extremely enjoyable book. I highly recommend it.

An Acutely Insightful - and Highly Readable - Illumination of the Shadows

Published by Thriftbooks.com User , 15 years ago
The impact of this book derives from its unique combination of human sensitivity and investigative objectivity. Rather than evolving from preconceived conclusions on the part of the author, "Shutting Out the Sun" resonates as the product of an honest quest to bring clarity to the human truth underlying the bursting of Japan's bubble economy and the hurdles the country must surmount in stepping up to the new global challenge. The author applies his immense journalistic skill to deepen this inquiry as he moves from questions of economic stagnation, through layered social realities, into the heart of the personal, graphically illustrating the effects of a level of conformist social pressure barely conceivable to those who haven't witnessed it first hand. For those who have had long experience with Japan and care dearly about the people of that land, the book gives welcome voice to shared areas of grave concern. And for the reader who is but intrigued with Japan from afar, it provides a precious glimpse into the shadows cast by the "sun" of apparent social harmony. An added bonus - the dynamic writing moves you right along. This book is a lively read!
Trustpilot
Copyright © 2022 Thriftbooks.com Terms of Use | Privacy Policy | Do Not Sell My Personal Information | Accessibility Statement
ThriftBooks® and the ThriftBooks® logo are registered trademarks of Thrift Books Global, LLC