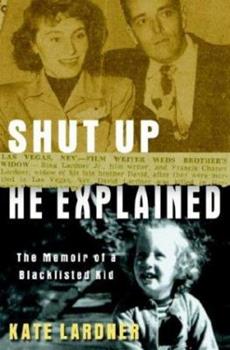 Shut Up He Explained: The Memoir of a Blacklisted Kid

With a wicked sense of humor and a born writer's perfect timing, Kate Lardner conjures up the Hollywood of the McCarthy era. In a kaleidoscopic and irresistible memoir, Lardner brings to life her jumbled childhood in a household of artistically talented, larger-than-life grown-ups. When Kate was not yet two, her father, David, was killed while on assignment for The New Yorker in war-torn Germany. Two years later her mother, the actress Frances Chaney,...

Published by Thriftbooks.com User , 17 years ago
Some would like to quantify Kate Lardner's considerable authorial skills as being genetic, passed down through blood and ink from her famous dad, Ring Lardner, Jr.. Not so. Kate's real father was killed when she was a small child. Several years later her mother married Ring Lardner. Let's give this lady credit where credit is due - she has penned a wry, sad, funny memoir all on her own. Granted, she did grow up in an artistic Hollywood household during the McCarthy era, a time when actors and authors were hauled before the House Un-American Activities Committee and asked not only about their membership in Hollywood's Communist Party but that of their friends. Ring Lardner's response to these queries is oft quoted: "I could answer....but if I did, I would hate myself in the morning." For this, Lardner was sent to prison. After his release he found himself blacklisted and was unable to find work. Of the letters her stepfather wrote from prison, Kate said, "My dad gave me the letters when I began interviewing him. I never expected to use them to the extent that I did. But I read them over and over and I wanted the reader to have the experience I had reading them. The waiting. The hope of parole. The visit." "Shut Up He Explained" (a title taken from a short book penned by her grandfather, Ring Lardner, Sr.) is the affecting story of a childhood spent in the shadow of Blacklisting. Of the alcoholism that has plagued her family Kate said it was and is a disease of "isolation and low self-esteem." She felt very much set apart due to the Blacklist. Yet, she never felt shame but rather saw her step-father's action as heroic. Still, it was this event that ordained the family's future and shaped the childhood of a small girl. Far from a bleak memoir, this series of remembrances is often high spirited. After all, the author grew up among a remarkably talented group of people who knew how to sometimes make the best of times out of the worst of times. Read it and hope that such a devastating event never takes place again, and marvel at a family's resilience. - Gail Cooke
Trustpilot
Copyright © 2022 Thriftbooks.com Terms of Use | Privacy Policy | Do Not Sell or Share My Personal Information | Accessibility Statement
ThriftBooks® and the ThriftBooks® logo are registered trademarks of Thrift Books Global, LLC