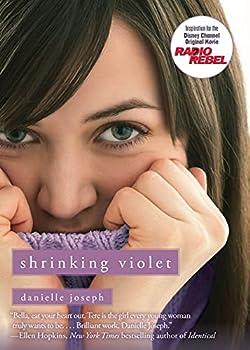 This description may be from another edition of this product. The inspiration for the Disney Channel original movie Radio Rebel ! High school senior Teresa Adams is so painfully shy that she dreads speaking to anyone in the hallways or getting called on in...

A Triumph for Shy Girls Everywhere!

Published by Thriftbooks.com User , 12 years ago
Tere Adams is so shy that in the real world, she can barely string a sentence together. But after school, she becomes Sweet T, the teen radio DJ sensation with the deep, sexy voice. None of Tere's classmates, including her droolworthy crush Gavin, know of her alter ego, until the radio station announces a contest: the winner will escort Tere to her senior prom, and then Sweet T's identity will be known. I related so well to Tere's struggles with shyness-- never before have I met a character who had experiences so many of the problems I'd had-- not being able to stand up to bullies, unable to vocalize everything on my mind, just scared to speak up for the fear that I'd be laughed at or make a fool of myself. Joseph does a great job with Tere, and the story is such a sweet triumph that it will have shy girls everywhere cheering.

Published by Thriftbooks.com User , 12 years ago
I was a shy teenager like Tere, the main character in Shrinking Violet. Eventually, I grew out of it, but if I'd had more books like Shrinking Violet when I was in high school, maybe I wouldn't have felt so out of place. Danielle Joseph creates a believable world in Shrinking Violet, one where there are all types of people. Anyone who has ever felt a bit shy or uncomfortable in any situation can relate to Tere. Readers will also sympathize with her when she's put in the position of being on the radio, something she's dreamed of for a long time, but something she also fears. Tere's relationship with music is wonderful, as is her friendship that blossoms with Gavin, the cute boy in her English class. Her strained relationshp with her mother also rings true. I say, "Shy Girls Unite." Get a copy of Shrinking Violet and come out of your shell.

Published by Thriftbooks.com User , 12 years ago
Tere Adams is a girl anyone can relate to. Readers will cheer her on as she works to find her voice among a cast of unique and unforgettable characters, and close the novel with a happy sigh. An amazing debut novel!

Published by Thriftbooks.com User , 12 years ago
Just finished Danielle Joseph's SHRINKING VIOLET, and this is the kind of book teens love for its authentic voice and realistic portrayal of what it's like to be graduating from high school. Tere Adams is a super-shy senior who loves music and has dreams of being a radio DJ. Her inner strength is tested when her mom's boyfriend provides an "in" to the local hit station at the same time a dreaded group presentation at school forces her out of her shell there. As someone who worked in radio right after college, I laughed like crazy at Joseph's dead-on characterizations of the personalities that inhabit popular radio stations, from the shirt-open prime time DJ, to the music-loving cool guy, to the front desk receptionist. This novel will especially appeal to teens who are constantly attached to their iPods and those who love popular music, and it has a mysterious love interest to satisfy romance fans, too. A fun, fantastic summer read! Note for parents/teachers/librarians: Although the MC is an older teen, the romance never goes beyond a French kiss, so this is a book I'd feel comfortable giving to more mature middle school kids as well as high schoolers.

Published by Thriftbooks.com User , 12 years ago
Teresa Adams, aka Tere, is painfully shy. Just the thought of speaking to people feels like a glob of peanut butter is stuck in her throat. The only time she is totally comfortable is in the privacy of her own room, her iPod pumping in her ears, and doing mock broadcasts for Miami's hottest FM radio station - SLAM - which also just happens to be owned by her stepfather. Tere surprises herself when a slot opens up at the station and she tells Rob, her stepfather, that she could help out. Suddenly, she is the new intern. Her confident on-air persona is Sweet T. Everyone loves her. Even Gavin, her crush that she can actually talk to, raves about how great the show is. To get more listeners, the station decides to hold a contest to win a date to the prom with Sweet T. Tere is less than thrilled. But maybe she will meet her knight in shining armor, and in the process, find her voice. This story was really cute. At first it was kind of hard to get into, but after a while, I couldn't put it down! It was fun for me to read, because I'm a shy person, and I could really relate to Tere. I enjoyed all the made up band names - they were cool! And one of them was Shrinking Violet. I was confused by the title for the longest time, but once I came upon the band name, I understood, and there is a cute meaning behind it. I really enjoyed this book, and when it comes out, you should pick it up. Danielle Joseph has written a great debut novel! Reviewed by: Ashley B
Copyright © 2020 Thriftbooks.com Terms of Use | Privacy Policy | Do Not Sell My Personal Information | Accessibility Statement
ThriftBooks® and the ThriftBooks® logo are registered trademarks of Thrift Books Global, LLC