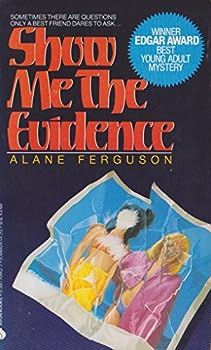 Show Me the Evidence

When, after a bizarre series of events, her best friend is accused of murdering her own baby brother and two other babies, Lauren, convinced of her friend's innocence, joins her in trying to solve the mystery and find evidence to clear her name.

Not a lecture/movie of the week-- suspense!

Published by Thriftbooks.com User , 17 years ago
The premise of this book-- a high school girl begins to suspect her best friend of psychological problems after finding a defaced photograph, and then the friend is accused of somehow causing the death of three infants-- drew me in. I expected it to work itself out to be a treatise on how dangerous repressed emotions are, or possibly even schizophrenia.but this book does not condescend to its teenage readers that way. Lauren refuses to believe in Janaan's guilt and as events play out they become more difficult to explain away-- especially when the coffins turn out empty.The two girls end up doing some detective work of their own and uncover the surprising truth. This is somewhere between Judy Blume and Nancy Drew and I enjoyed it a lot more than I thought I would-- I was prepared to find a predictable conclusion enjoyable enough but this was so much better. Highly recommended and an unexpected treat!

"One of the best books I've ever read! "

Published by Thriftbooks.com User , 22 years ago
"This a great mystery that the whole family will love. A real thy slaper. You won't be able to put it down! Five stars all the way!"

I thought this book was very good.

Published by Thriftbooks.com User , 22 years ago
I thought "Show Me The Evidence" by Alane Ferguson was a very good book. Two best friends are living a nightmare. Three babies are dead. There is no evidence, just emty caskets. Nothing to prove the babies died of anything but a crib death. Lauren Taylor and Janaan Kashad race against time to solve the mystery and to save themselves.
Copyright © 2020 Thriftbooks.com Terms of Use | Privacy Policy | Do Not Sell My Personal Information | Accessibility Statement
ThriftBooks® and the ThriftBooks® logo are registered trademarks of Thrift Books Global, LLC