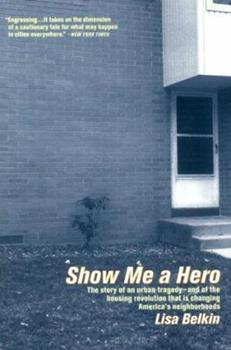 Show Me a Hero

Not in my backyard -- that's the refrain commonly invoked by property owners who oppose unwanted development. Such words assume a special ferocity when the development in question is public housing. Lisa Belkin penetrates the prejudices, myths, and heated emotions stirred by the most recent trend in public housing as she re-creates a landmark case in riveting detail, showing how a proposal to build scattered-site public housing in middle-class neighborhoods...

Published by Thriftbooks.com User , 13 years ago
Lisa Belkin takes a subject which is potentially dry, and "not in my backyard," and leaves us informed and enlightened. She interweaves the personal stories of those whose futures were directly involved with the building of public housing in a middle-class neighborhood, while informing the reader about city politics in Yonkers, and the enigmatic young politician who tried to navigate them. Definitely recommended reading.

No such thing as a perfect hero

Published by Thriftbooks.com User , 21 years ago
Show Me a Hero is a stunningly complicated story about a simple everyday need: shelter. The youngest mayor of a city whose heyday passed long ago struggles to implement a judge's order to build housing for the poor on the city's historically white, middle class east side. Belkin takes the reader inside City Hall, underscoring the petty fights and politics, balancing the ridiculousness with moving tales of those who fight the housing to protect what's theirs, and of the women struggling to provide adequate housing for their children despite poverty, errant men, and poor health. There are surprising twists and turns, with a heartbreaking end that brings tears to the eyes of the most jaded reader.

Published by Thriftbooks.com User , 22 years ago
This is a well written book that encourages thinking about important social issues. The City of Yonkers was forced by the courts to desegregate housing after years of discriminating against minorities. The decision was made to have small groups of cluster homes scattered throughout white neighborhoods. All hell broke loose in the white communities after the court decision. Whites feared a minority presence and a decline in property values and fought viciously against the homes. Poor families hoped for a safer, better place to live and raise their families. A balanced and complex story, well wrought, with an interesting cast of characters from politicians to single mothers desperate to move their families to safer neighborhoods. All the answers about the future of public housing aren't here, but certainly a clearer concept of the issues involved, from personal to political, can be gathered from this fascinating story.

Published by Thriftbooks.com User , 22 years ago
An engrossing, "I cannot put it down" book. Belkin takes facts and turns them into one of the best stories yet. I would recommend it without qualification. A MUST

Published by Thriftbooks.com User , 22 years ago
Belkin's literary eye and keen observational humor made what could have been a sociology lesson into a gripping drama. The forced integration of Yonkers doesn't sound like the stuff of great storytelling - but I was hooked.
Copyright © 2020 Thriftbooks.com Terms of Use | Privacy Policy | Do Not Sell My Personal Information | Accessibility Statement
ThriftBooks® and the ThriftBooks® logo are registered trademarks of Thrift Books Global, LLC