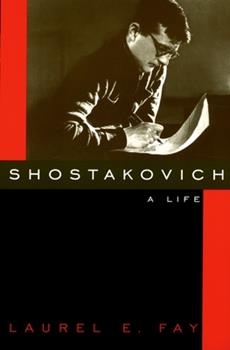 For this authoritative post-cold-war biography of Shostakovich's illustrious but turbulent career under Soviet rule, Laurel E. Fay has gone back to primary documents: Shostakovich's many letters, concert programs and reviews, newspaper articles, and diaries of his contemporaries. An indefatigable worker, he wrote his arresting music despite deprivations during the Nazi invasion and constant surveillance under Stalin's regime. Shostakovich's life is...

Published by Thriftbooks.com User , 12 years ago
Laurel Fay has written a well documented biography of Shostakovich, a monumental figure in classical music of the XX century. The unique aspect of this biography is that Laurel Fay has managed to keep the interest in Shostakovich's life alive until the end. In this, it is true, she has been helped by the bizarre rules of the defunct Soviet Union, where some mediocre, uninspired party hacks decided what type of music should be written by Soviet composers. It is incredible that, under these rules, Shostakovich managed to write his towering symphonies, his delightful operas and his highly original chamber music.Make no mistakes. Shostakovich displayed the overwhelming selfishness of many creative artists, who firmly believe that they have to create at any cost, and since the creative spirit requires one to be alive,they will compromise with their conscience to remain alive. Shostakovich's compromises are not edifying, but the lives of many artists are not edifying (Wagner was one of the most despicable artists Germany has ever known) but we should judge artist by the gifts they give us, not by their actions. Laurel Fay has conveyed a troubled life with enough sympathy that at the end we forget Shostakovic's faults, and rejoice that, despite all the problems, we can enjoy his extraordinary music.

Published by Thriftbooks.com User , 13 years ago
Fay's biography of Shostakovich is a welcome relief for the scholar and the general reader. It is carefully and (importantly) credibly researched and does a good job balancing musical and personal biography. It us utterly without histrionics or bombast, which is why it's a relief. The last twenty years or so have seen Shostakovich studies taken over by a political discourse that is more about its participants than Shostakovich. Claims that the book is dull probably reflect the fact that it's not written to be a manifesto or a potboiler. It's a clear, organized, scholarly narrative.

Published by Thriftbooks.com User , 14 years ago
Fay does a wonderful job here presenting Shostakovich's life and career the way they really were; not the way some of us would have wanted to happen. Reality over fantasy. Frankly and realistically speaking, Shostakovich was never a dissident. He had countless opportunities to escape the Soviet regime. Not only he never went to jail for his political views, but he never even publicly made any comments or remarks of a political nature. By contrary, he was content (if probably not very happy...) playing the Soviet era political games and furthermore, even occupying high rank positions in the Communist Party. So much of a dissident life..... What Fay does here is accurately portraying Shostakovich the way he publicly behaved and to present his actions the way they really happen. After all, we are all judged by our Actions, and not only by simple and cheap words. Having said that, it does not mean that I do not like Shostakovich: by contrary, I admire and respect him enormously as an artist/composer (I would like to stress here that he is after all my favorite composer), but I have little respect for him as a human being. Some would say here that is impossible to judge one without the other: I totally disagree since I do not have a problem clearly differentiating between the two. I have already mentioned that Shostakovich (despite his faults) is my favorite composer. The other two, in this order are George Enescu and Richard Strauss (all 20th Century `human' or `mortal' composers - Bach and Beethoven being the Gods here!). Not only I admire Enescu very much as a musician (I can only hope here that more people will (re)discover his genius), but I also respect him as a human being. Little is known, but he chose self-exile in Paris when the Communists supported by the Russian Red Army took control of Romania (as well as much of Eastern Europe), instead of having to deal with such a regime. He left behind a very comfortable life and died in almost total poverty in Paris eight years later, happy however knowing that he never compromised his principles. Again, we are talking actions here, and not just simple words..... On the other hand, Richard Strauss (my third favorite composer), and one of the greatest musical geniuses, was not such a great human being after all. It is all fact and well documented that he was a puppet of the Nazi regime and for years he was their Culture Minister and only became a `dissident' when Hitler got bored with him and his antics. It is only when Strauss fell out of grace being of no further use to the regime that he decided to become a `dissident'. Same can be probably said (true, to a much lesser degree) about another great composer of the 20the Century, Jean Sibelius, who gladly accepted all the honors and titles that the Nazis bestowed upon him. It is after all so much more difficult to take a stand, and let your actions speak for yourself.... In conclusion, this is an excellent book presenting things the way they r

Ease up a bit please!

Published by Thriftbooks.com User , 17 years ago
This is a fine book--well researched and well written. I had a great time with it as a casual on-the-sofa read and learned much from it about a composer I like. I recommend it. I'm a little stunned by the viciousness of some of the revues--failing to deify the composer is no crime; having opinions--even controversial ones--about what motivated the composer is just a biographer's job. Some of the really negative comments about the book, and more disturbingly, the author make me wonder if she's being brutally victimized a bit here--ironically, in an almost Stalinist way. I'm having difficulty imagining why the venom. Is there a Shostakovich cult? If you are interested in learning about the man and his music the number of books available on the topic is surprisingly small--you might as well read them all. In contrast the controversies surrounding Shostakovich's life are absurdly large. The definitive book on Shostakovich won't be written until everyone who had anything to do with him is long gone and emotional involvement has settled a bit. Even then, well, no great composer, nobody in fact, ever gets consistent appraisals from biographers. No, sorry, I don't think DS was the "greatest" composer of the last century, I'm not even sure he was the bravest. I'm not sure those words really apply at all to evaluating the creators of art music during that bizarre time. I think we lacked a single stand-out genius on the order or Mozart, Beethoven, or Bach but I'd argue the 20th Century had numerically more genuinely inspired and original composers than any other era. Mull over Bach, Telemann, Handel, Vivaldi and lesser lights of the first half of the 18th Century--then mull over Bartok, Stravinsky, Nielsen, Shostakovich, Strauss, Janacek, Puccini, Mahler, Elgar, Prokofiev and the long list that follows--up to mid-century when real problems start to show. No mediocities in their ranks but no Beethovens either. Something unprecedented was going on back then, maybe Western art music's Indian Summer. There's a good book in this I'm sure. Irony is that during a time when so much compositional genius was floating around, the interest in art music began to decline--rapidly. This may in fact account for the diversity of the music of that time and, more importantly, the inconsistency of it. You can actually trace the careers of various composers as they create and then respond to the lack of response or to extramusical pressures that make a hash of their individual geniuses. I'd say Shostakovich, then, was not the greatest 20th Century composer but he is the greatest example of the dilemma of the 20th Century composer.

Published by Thriftbooks.com User , 22 years ago
I love this book - Laurel's book is very well researched and very readable. I feel like I knew this genius personally. It is filled with letters or statements from those who were close to Shostakovich so he is seen less "official" then most other books.
Trustpilot
Copyright © 2022 Thriftbooks.com Terms of Use | Privacy Policy | Do Not Sell or Share My Personal Information | Accessibility Statement
ThriftBooks® and the ThriftBooks® logo are registered trademarks of Thrift Books Global, LLC