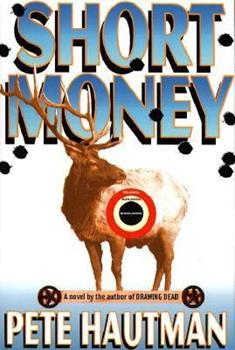 This description may be from another edition of this product. Ex-cop Joe Crow thinks he hits rock bottom when he humbly accepts a job as a bodyguard for a plastic surgeon with unsavory proclivities. Crow soon discovers Dr. Bellweather has some nasty enemies, and...

Published by Thriftbooks.com User , 17 years ago
Pete Hautman's Short Money is a delightfully charming, outrageously funny mystery along the lines of Carl Hiaason. Hartman takes us on a runaway roller coaster ride with policeman, Joe Crow. Crow's life is out of control, and he has drug problems, marriage problems and job problems. Of course, most of his problems are of his own making.Joe takes a new job that seems rather simple, and things are never as simple as they first appear. The plot is hysterically funny and without giving too much away, Joe has to deal with a sleazy brother-in-law lawyer, a runaway kid, a missing cat, two crazy brothers (one downright psychopathic), a scheming plastic surgeon, a druggie wife, a farm for canned hunts, and several wild animals. There are more than a few belly laughs, and I actually had tears rolling down my cheeks from laughing so hard in several spots.I have been told that Short Money is not Hautman's best effort. If this is the case, I can't wait to read more.

Published by Thriftbooks.com User , 21 years ago
I purposely waited to read "Drawing Dead" until after I finished this prequel, so I can attest to its merits as a standalone book.Pete Hautman's prose is lean, mean and hilarious. The action occurs almost without warning and the nutty bad guys always get what's coming a la Carl Hiassen and James W. Hall.If you're looking for a quick, refreshing read, look no further.

Published by Thriftbooks.com User , 23 years ago
Fans of Pete who love Joe Crow, will get a good laugh, and a great story in this "prequel" to "Drawing Dead". Unsavory characters, good twists and turns, and of course, Joe. This was my favorite of all his books, and it had the most laughs as well. Get a copy and dig in.
Copyright © 2020 Thriftbooks.com Terms of Use | Privacy Policy | Do Not Sell My Personal Information | Accessibility Statement
ThriftBooks® and the ThriftBooks® logo are registered trademarks of Thrift Books Global, LLC