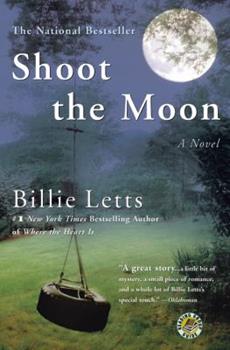 From one of America's best-loved storytellers - the author of the #1 New York Times bestseller WHERE THE HEART IS - comes a tale of a small Oklahoma town and the mystery that has haunted its residents for years. In 1972, windswept DeClare, Oklahoma, was consumed by the murder of a young mother, Gaylene Harjo, and the disappearance of her baby, Nicky Jack. When the child's pajama bottoms were discovered on the banks of Willow Creek, everyone feared...

Published by Alice H. , 7 months ago
Billie Letts wrote four books, all excellent, but this one skyrocketed to my favorite! The murder of a young mother and the disappearance of her young child shocks a small Oklahoma town. They are shocked again when years later the child, now a grown man, returns to town looking for answers.

Shoot the Moon caught my eye

Published by Thriftbooks.com User , 3 years ago
This story has enough going on so that one is caught up in it throughout the book. From California to Oklahoma, the main character unfolds a life of his blood mother and father and his family in Oklahoma. So how did he end up in California with the life he has now? The mystery unfolds the longer he stays in Oklahoma. I enjoyed the suspense this story holds. My second book of Billie Letts.

Published by Thriftbooks.com User , 16 years ago
Billie Letts has once more proven herself to be one of the most talented and grounded writers today. Shoot The Moon reads like a movie script with vivid descriptions to ignite the imagination. It's funny and heartwarming. A lovely book by a lovely woman...I met her at a book signing and she was so down to earth and kind.

Another winner from Billie Letts!!

Published by Thriftbooks.com User , 17 years ago
I could not put this book down. Every opportunity I got to pick it up I did. The story is about a man, Dr. Mark Albright, veterinarian to the stars, who travels to DeClare, OK to find out about his birth mother. Mark's father has recently passed away, and while going through his things, he discovers he was adopted, and was originally from OK. Well, back in 1972 in Declare, a young woman (Gaylene Harjo) was stabbed to death, and her 10 month old baby, Nicky Jack went missing. After years searching, the town feared him dead, and no definitive answers were giving as to who killed Gaylene. Well, Mark discovers he's Nicky Jack. The towns divided as to wether they think he's the real deal, or a con artist. But Mark is taken in by Teeve, his aunt, and Ivy his cousin. With their help, and the help of a bunch of other very colorful townsfolk, they are searching for answers as to why and who killed his mother, how did Mark/Nicky Jack end up in California with his adoptive family, and who's been trying for 27 years to cover up the facts. There were twists and turns all over this book, and you'll NEVER guess who was responsible for the killing/kidnaping. I highly recommend this read. This was my second book by Ms. Letts, and I loved it, just as I did The Honk and Holler. Can't wait to read more from her, she's quickly turning into one of my favorite authors!

Published by Thriftbooks.com User , 17 years ago
Authors can write several different types of books and this one is not, and does not claim to be, related to Where the Heart Is! That said, if people can stop and read this book and stop analyzing it as if it is a sequel to Letts's other great tales, this truly is an intruiging, captivating story. I read it in one day because I could hardly wait to find out the many truths that are revealed throughout. Love it!

Published by Thriftbooks.com User , 17 years ago
This is an unforgettable book - and so much better than her other two. As I read I could picture the actors who will portray the characters. This book tugs at your heart, makes you laugh, makes you want more. Billie Letts knows how to get into each of her people, especially Gaylene as a young girl writing her diary. I was still hungry for more when I turned the last page. Don't be left out when Hollywood makes this --- READ THE BOOK FIRST - you won't be sorry.

Published by Thriftbooks.com User , 17 years ago
In 1972 DeClare, Oklahoma, eighteen-year-old Gaylene Harjo was stabbed to death in her trailer and her month old son Nicky Jack disappeared. For weeks the town was looking for him but the only trace of him were the pajama bottoms near the creek. The sheriff O Boy Daniels arrested someone for the murder of Gaylene and her son but many people thought he went after the wrong man, who died in prison.Almost thirty years later wealthy Hollywood veterinarian Dr. Mark Albright checks into the motel in DeClare and hooks up with Teeve Harjo. He tells her he found out three weeks ago that he was adopted and his birth mother was Gaylene. He did not know that she was killed and he was presumed dead. He seeks information about his mother, his biological father and who transported him to California to be adopted. Instead he is shot at and jailed while a person is murdered, another commits suicide, and a third arrested, convicted and is sentenced to death row.SHOOT THE MOON is more than a murder mystery; it is the story of one man's need for answers surrounding the circumstances of his birth and adoption. Readers get to know Gaylene through the pages of her diary, the entries of which are sprinkled throughout Billie Lett's latest blockbuster novel. The murder of Nick Jack's mother affected the whole community in different ways and three decades later, many of them are still living with the consequences in this exciting, heartwarming and poignant thriller.Harriet Klausner
Trustpilot
Copyright © 2022 Thriftbooks.com Terms of Use | Privacy Policy | Do Not Sell My Personal Information | Accessibility Statement
ThriftBooks® and the ThriftBooks® logo are registered trademarks of Thrift Books Global, LLC