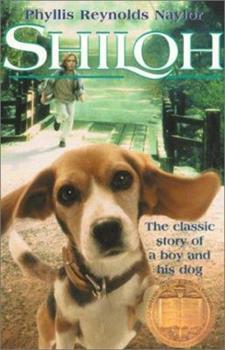 (Book #1 in the Shiloh Series)

For use in schools and libraries only. When he finds a lost beagle in the hills behind his West Virginia home, Marty tries to hide it from his family and the dog's real owner, a mean-spirited man known to shoot deer out of season and mistreat his dogs.

Published by Thriftbooks.com User , 15 years ago
Naylor, Phyllis Reynolds, Shiloh, New York, New York: Aladdin Paperbacks Publishing, 2000. 137 pages. Have you ever thought to yourself, "Why do people abuse their animal(s)?" I mean it is just plain wrong. In the book Shiloh there isn't really a main setting in the book because they go all around their town. The main characters are Marty who is a boy, then there is Shiloh who is the dog which is surprisingly the main character but also the title of the book. My favorite part of the book was when Judd got in a truck accident because of drinking to much beer. That night Shiloh snuck out of the house because he had a weird feeling and when Shiloh was looking off the bridge he saw someone which was Judd Travers who was the original owner of Shiloh and still was but Judd was abusing Shiloh, so Shiloh ran away. Well, I don't want to ruin the story but Shiloh started barking like crazy when he found Judd on the side off the bridge. Marty woke up at the loud barking and noticed that Shiloh wasn't there. If it wasn't for Shiloh, Judd would've been dead. I don't really think that you can really judge a book by its cover. If you love animals then you will really love this book. It is really sad because Judd abuses his animals so bad, and it makes me get all teary. This book is the best book I have ever read. I have read this book more then 5 times. I really love to read animal books. I really wouldn't change anything about this book. I would rate this book out of 1-5, with four being that I couldn't put this book down, it was so good and one being that it was hard to stay awake, and I struggled to finish it, I would rate this book a five and beyond.

Published by Thriftbooks.com User , 15 years ago
This is a fiction animal story by Phyllis Reynolds Naylor. The protagonist is a poor boy named Marty Preston. Other characters are Shiloh and Judd Travers. Shiloh is a dog who helps Marty learn perservance. Judd is Shiloh's owner who tests Marty's word and devotion for Shiloh. The theme is when you love someone or something you are willing to do anything. In this book Marty loves Shiloh so much, he hides him, lies to his family, steals food and works to earn him. The plot begins when Marty finds a beagle dog in the hills and names him Shiloh. Shiloh belongs to Judd, a drunk who beats his dogs. Marty's dad makes him return Shiloh to Judd. Shiloh runs back to Marty. Marty hides Shiloh, but his parents find out when Shiloh gets attacked by another dog. While Shiloh is healing, Judd tells Marty he will sell Shiloh for $40.00, and he can work over at his place. Marty agrees and starts work, but Judd says he can't have Shiloh. Marty is surprised but continues to work. He returns the next couple of days although Judd tries to make him quit by making his work harder. Marty keeps working because he knows Shiloh needs him. On the last day of work, Judd gives Marty a collar for his new dog. I really liked this book because it made me feel sad, happy, frustrated, relieved, scared, angry, hopeful and triumphant! My favorite part was when Marty's mom snuck up on him and saw Shiloh. It was shock because I wasn't expecting his mom to follow him and when he turned around she was right there. I felt relieved because Marty didn't have to keep secrets anymore. My overall opinion is that it was an excellent book about a boy and his dog. I recommend this book to dog lovers and non dog lovers alike. I will be reading the next two books in this series. A review by Austin 9yrs old.

Gives new meaning to caring for a pet

Published by Thriftbooks.com User , 21 years ago
To keep Shiloh, a white beagle with brown and black spots, Marty Preston has to do more than keep a water dish filled and train his dog not to go the bathroom indoors. He has to build a special pen, buy food with his own allowance, and even do some odd jobs for extra money. Also, as Shiloh is really someone else's dog, Marty has to lie and keep secrets from his parents and friends. He excuses his actions with the fact that Shiloh is better off with him than with the abusive original owner--which is, I know, justification enough for most readers. The novel is not that simplistic, though: Marty eventually realizes that he will have to come clean, even if it will mean losing his dog.The characters in "Shiloh" are well-drawn and realistic. It was nice to read about complex people who love animals, grow up with guns and occasionally hunt for their own food. Their West Virginian dialect is a pleasure to read. Phyllis Reynolds Naylor's observations, through Marty's eyes, really seem like an eleven-year-old boy's, not a grown woman writer's. Moreover, her pace, like her integrity as a storyteller, never lags.This is a great book for teaching children not just about dogs and other pets, but about right and wrong. Nothing is purely white or purely black in this novel, not even the "villian," Judd Travers. There is a powerful scene near the climax when Marty starts asking himself questions about what is ethical and what is not--about whether or not the ends justify the means. All the scenes that follow show how a young boy, through his love for his dog, learns life lessons about maturity, responsibility and respect.Despite all this complexity, the lessons of "Shiloh", like its theme, are very simple. They are the universal values that all children pick up for themselves whenever they truly experience life.

Published by Thriftbooks.com User , 22 years ago
What a wonderful book! I read it after my 11-year old son suggested it as a change from my usual reading fare of history and biography. It turned out to be much more than just a summertime reading diversion...it became for me a deeply moving reading experience in its own right. I was quickly captivated by Marty and his family, Shiloh, the beagle, and yes, even the despicable Judd Travers.The story is straightforward: Marty Preston is an eleven-year old boy living with his parents and two younger sisters in rural West Virginia. It is a close-knit, loving family with traditional values and a clearly defined set of rules to live by. His father is a mail carrier and his mother a homemaker.One Sunday afternoon, as Marty is walking along a backwoods road, he spies a young beagle hiding under a bush. He calls to it, but the dog doesn't respond. When Marty walks away, the dog follows him. Marty tries to get the dog to come to him several times, but the animal, which has obviously been abused, cowers miserably. Finally, the dog happily comes to Marty when the boy whistles at him. Marty immediately falls in love with the dog, whom he names Shiloh. The little beagle responds with trust and affection. The boy quickly figures out that Shiloh belongs to Judd Travers, a local ne'er-do-well, and a man with an unsavory reputation for dishonesty, a hot temper, and animal abuse. Marty wants to keep Shiloh, to protect him from Judd. However, his parents insist he return the dog to its rightful owner, which Marty begrudgingly does.Shiloh runs away from Judd a second time and finds his way back to Marty's house. This time, Marty vows to keep him. He hides the dog, sneaks food out of the house to feed him, and begins to lie to friends and family when questioned about Shiloh's whereabouts. A tragic accident causes Marty's secret to be found out by his parents. He is forced once again to return Shiloh to his master. Marty, desperate to keep Shiloh, offers to do almost anything to get Judd to give him the dog.I won't give away the ending of the book; suffice it to say, it is a dramatic and compassionate ending, sure to move anyone who reads this book."Shiloh" is a beautifully and masterfully written in every way. It is written in the first person, from Marty's point of view. The narrative is written in a rural West Virginia dialect that sounds totally natural and unaffected. It seemed almost possible for me to hear Marty speak as I read along. The book's plot is absolutely superb - tightly woven, dramatic, and realistic. Each of the characters come to life with complete believability. All of the situations presented in the narrative are easy to understand and appropriate for young readers. Phyllis Reynolds Naylor proves why she is such a gifted writer of children's books, mainly because she so brilliantly fires the reader's imagination and teaches positive values. In the story, she presents Marty with an ethical dilemma which, at one

Both boys and girls will love Shiloh!

Published by Thriftbooks.com User , 22 years ago
Shiloh is a wonderful example of realistic fiction for children. The story revolves around Marty, a small town boy in the hills of West Virginia. There isn't much money, and putting food on the table is difficult and all consuming for the adults of his community.Marty spends his free time roaming the hills with his rifle, until he discovers Shiloh, a dog, whom he learns lives with constant abuse by his owner. Marty determines to rescue Shiloh and care for the dog he immediately becomes attached to. He finds, however, that simply wanting something, is not a determinant of taking possession: he is stunned that the abusive owner has rights, which is confusing and heartbreaking for him.Throughout the story, Marty is confronted by moral issues which he must wrestle with as he focuses his attention on loving Shiloh and finding a way to make life better for the dog. In doing so, his values are questioned and his morality is strengthened. He must learn to solve moral dilemmas by analyzing the choices he has. He realizes that adults don't always do the right thing, nor do they always have the answers to questions. Most, important, he learns to recognize that he has the ability, within himself, to realize the resolve it takes to do the right thing in the face of adversity.Young readers will experience these dilemmas with Marty, and the story provides youngsters with the opportunity to develop their own moral skills along with him.
Trustpilot
Copyright © 2022 Thriftbooks.com Terms of Use | Privacy Policy | Do Not Sell or Share My Personal Information | Accessibility Statement
ThriftBooks® and the ThriftBooks® logo are registered trademarks of Thrift Books Global, LLC