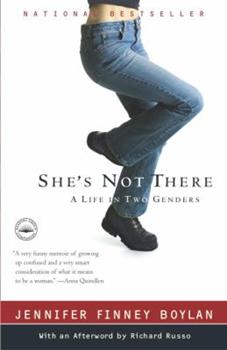 She's Not There: A Life in Two Genders

The provocative bestseller She's Not There is the winning, utterly surprising story of a person changing genders. By turns hilarious and deeply moving, Jennifer Finney Boylan explores the territory that lies between men and women, examines changing friendships, and rejoices in the redeeming power of family. Told in Boylan's fresh voice, She's Not There is about a person bearing and finally revealing a complex secret. Through her clear eyes, She's...

"What makes imagining the worst so easy?"

Published by Thriftbooks.com User , 13 years ago
Jennifer Finney Boylan spent her first 40 years as a woman in a man's body. She's Not There : A Life in Two Genders is Jennifer's story about growing up as James, knowing with "heartbroken conviction" that she was living in the wrong life, and hoping to be "cured by love." James Boylan met and married Grace and became a professor at Colby College in Maine. Together they raised two sons. Boylan's life included playing in various bands, writing and publishing successful books, and constant excruciating dissonance and concealment. At age forty-two, after years of therapy and exploring transgender issues, Boylan began the transition to a female body. This was achieved through hormone therapy and eventual gender reassignment surgery. We are led to understand that she didn't DECIDE to make this transition, but rather stopped resisting it. Boylan's writing is often wry and even funny, but she never tries to conceal the pain of her transgendered life and the redemptive integration of her reassignment. She moves back and forth in time, framing the story with an emotionally revealing opening and then varying the intensity throughout. The impact on Boylan's family and friends was "atomic." Boylan chose fictional names for the non-public people in this memoir, and her choice of the name Grace for her spouse cannot be by chance. After years of marriage, Grace mourned the loss of her husband while finding enough love and faith in her life partner to stay in the relationship. Unstinting in her own self-exposure, Boylan leaves a veil of privacy over the nature of her spouse's accommodation to this change. In a riveting afterword (from which my title line is taken), Boylan's closest friend, author Richard Russo, explores his own response to Jennifer's transition and its impact. Russo writes of Grace: "Years earlier, her heart had inclined in the direction of another soul...We love whom we love. In the past two years, for Grace, everything had changed and nothing had changed. Her heart still inclined, as was its habit." She's Not There : A Life in Two Genders is a beautifully written story of hope, inviting us to reassess the meaning of love and friendship. To call it a book about sex change would be to sell its message far too short. Highly recommended. Linda Bulger, 2008

Published by Thriftbooks.com User , 17 years ago
"Life is not about finding yourself, it is about creating yourself" -George Bernard Shaw"She's not there" is a great primer, of sorts, for those outside the Transgender community to assist in understanding the stuggles and sacrifices that Transpersons go through to be themselves. It is not a dry, 'medical grade' book, (which there are plenty of), but it puts a human face on a facet of life theat is puzzling to many. Honest, witty, and extremely well-written, I picked up this book and finished it in 5 hours. Not that I'm any sort of literary demon, but because I myself am also Transgendered. So much of this book resonates as true, (in my experience), that it now serves as an 'Transgender 101' reading list book for my friends. If you are Transgendered, or know someone who is, this book will go far in bridging the education gap of this misunderstood, and oft maligned segment of our society.

It's a memoir, not a textbook.

Published by Thriftbooks.com User , 17 years ago
Well, as yet another transsexual, I read this book after seeing good reviews in the local paper and a few other places, not really expecting much frankly, because most books I have tried to read written by transfolk have been....well, bad, frankly. Or way too preachy, at the least.Well, this book is not preachy. It's not clinical. It doesn't beat the reader over the head with the subject. Boylan writes very matter-of-factly, with humor, and taking things in stride -- yes, she has been very lucky that the people in her life have been accepting for the most part; however, people who discount this book because she has had good luck are doing themselves a disservice. Not every transition has to involve being committed, disowned, destitute, or nearly killed. The problem is that the vast majority of well-adjusted trans people end up fading into the woodwork, as she states at one point, and don't want to make a big deal of their past.This is the book that I have given to friends and family to try to help them understand what I'm going through, because it is easy to read, it's not a complete downer, and it does a good job of expressing the feelings I have (although I obviously don't feel exactly like Boylan). If you are looking for an insight on transsexuality, this is a good primer.

A Bittersweet Memoir, At Least For Me

Published by Thriftbooks.com User , 18 years ago
Jennifer Finney Boylan has written a tremendously moving and sometimes funny account of her transformation from male to female. (At one point she opines about taking speech lessons from a Hungarian voice specialist: "'Great,' I said. 'So I'll talk like a Hungarian woman.'")She is obviously a fine writer and reading her story is quite effortless. For me this is a bittersweet memoir because of all the anguish that Ms. Boylan's transformation causes, particularly for the wife Grace, who comes across as being terribly decent and loving. (I do not mean to imply that Boyland is not decent and loving, quite to the contrary.) Grace expresses her feelings about all that is going on very poignantly: "You asked me if I thought this was necessary, and yes, I do. I think it's taken incredible bravery and courage for you to be the person you need to be, and I'm not going to stand in the way of that. I would never keep the person I love from being who she needs to be. But I can't be glad for you, Jenny. Every success you've had a a woman is also a loss for me."Both Jennifer and Grace are brutally honest in how they feel; at times I found their honesty almost too painful to read.But shouldn't everyone have a friend like Richard Russo! What a supportive and thoroughly caring person he is. Boylan's best friend, he writes a warm and loving afterward to this story.

Not Just Another Tell-All

Published by Thriftbooks.com User , 18 years ago
I was reluctant to read another tell-all by yet another transsexual. As a "trans" person and sociologist studying these issues, who has read a thousand books on the subject, the last thing I wanted to hear was another account of playing dress-up at age three and all the sordid details thereafter. Yet friends insisted, despite myself, that I read just the first chapter. I was hooked by the author's delicate, nuanced brushstrokes. The short story format and staggered chronology gave me the feeling of how this life had been interrupted and jerked around by the social forces of stigma and conformity. I felt intimately connected to the author and, ultimately, to my own life.
Copyright © 2020 Thriftbooks.com Terms of Use | Privacy Policy | Do Not Sell My Personal Information | Accessibility Statement
ThriftBooks® and the ThriftBooks® logo are registered trademarks of Thrift Books Global, LLC