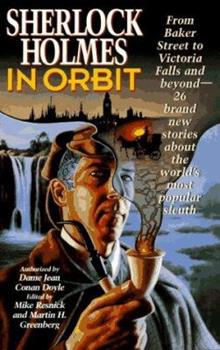 Authorized by Sir Arthur Conan Doyle's estate, this brand-new collection of 26 Sherlock Holmes stories takes place in Holmes' own era, in our present time, and in the future. All the tales contain some science fiction or fantasy element, and all remain true to the spirit and personality of Sir Arthur Conan Doyle's most famous and enduring creation.

Beam me up, Holmes, ah, Scotty, and call Dr. Watson--McCoy

Published by Thriftbooks.com User , 18 years ago
Holmes as a robot? A computer program? An enhanced human? A time-traveler? A Martian? An alien race? You bet your Baker Street, and all well-conceived and well-written! The Undying Detective proves once again that he will never die! Five Sherlock stars from The Raven!

Published by Thriftbooks.com User , 19 years ago
Sherlock Holmes and Doctor Watson have been in the public domain for some time, and since then the literary world seems to be divided between those who can duplicate the original Arthur Conan Doyle stories tolerably well and those who only THINK that they can do this.The cover on this book is as fascinating as any individual story: an eye-catching color scheme which includes a robotic Sherlock (the eyes are blank and the head is opened to reveal what appears to be a computer chip) superimposed against a background that includes a waterfall (presumably the infamous Reichenbach Falls) and a traditional 19th Century London scene of a horse-drawn carriage on cobblestones.As one might guess from the title as well, the cover depicts the theme of the book: some of the short stories in it are set, in accordance with tradition, in 19th century London, and some are set in the future.Even some of the "traditional" stories have a futuristic twist to them. For example, The Adventure of the Second Scarf involves an alien visitation to the year 1897 and a subsequent space flight.I was prepared to hate all of the futuristic stories, but some of them are intriguing. In "Two Roads, No Choices", two scientists from the year 2014 visit go back 102 years in time to visit Holmes and Watson in their lodgings on Baker Street in order to ascertain why the Titanic did NOT sink.This story has got a warm familiar Rod Serling kind of feel to it, and it's very easy to forgive the author, Dean Wesley Smith, for overlooking (deliberately, I'm sure) the fact that by 1912, Conan Doyle's Holmes had long since left Baker Street and retired to his country home in Sussex to keep bees."The Case of the Purloined L'isitek" by Josepha Sherman is a cute futuristic story about a staid and dignified horsy race known as the Shrr'loks on the planet Kholmes ruled by a pony whose mannerisms resemble those of a certain fictitious earthly detective - just the sort of story that I wanted to hate but couldn't.Some of the more traditional stories cleverly interweave actual historical personages or events from the Sherlockian era with genuine references from the Conan Doyle stories or with conclusions drawn by Sherlockians from those stories."The Adventure of the Russian Grave" by William Barton and Michael Capobianco involves an actual astronomical event that took place in the early 20th century, plausibly anticipated by Professor Moriarty's "Dynamics of an Asteroid"."The Future Engine" by Byron Tetrick features the son of mathematician Charles Babbage, a genuine historical figure, whose creation of an analytical engine to perform mathematical calculations anticipate the development of the computer - the functions of which really do match Sherlock Holmes's description (from Conan Doyle's "Adventure of the Greek Interpreter") of the mental processes of his brother Mycroft.There are also two stories in this volume which alternatively provide a lighter and darker side of Lewis Carroll.And Frank M.

Published by Thriftbooks.com User , 23 years ago
Dear friends,It is a real pleasure to be able to read other stories about Sherlock Holmes. Many of the stories show that the writer has read indeed the original books.You start reading and when you look around you perceive that the day is almost ending and you have done nothing except reading.Paulo Sunao

A Mixed Bag for Sherlockians and Sci-Fi Fans

Published by Thriftbooks.com User , 23 years ago
Sherlock Holmes is probably the most famous and best-loved of fictional characters (and there are some who will argue over the use of the term "fictional"). Mike Resnick and Martin Greenberg have collected twenty-six original stories, featuring Holmes in his own time, in the present, in the future, and after death. As is to be expected in such an anthology, a few of the stories are superb, most are quite good, and a few are simply dismal - neither good sci-fi nor good Sherlock Holmes. However, the percentage of good to excellent stories is sufficiently high to make this book more than worthy of purchase. If you noticed the "Other purchases" section of this listing, Marvin Kaye's "The Resurrected Holmes" (or any of the other volumes which he edited) are much the same sort of collections. Kaye, however, also includes biographies of his authors - something which I would have appreciated in "Sherlock Holmes in Orbit." Most of the names meant nothing to me, from which I surmise that most come from the world of science fiction/fantasy (which I do not read extensively) rather than Sherlockiana (which I do). Many of the stories connect Holmes with his famous nenesis Professor Moriarty, whose expertise on the binomial theorem made him a natural part of the world of computers. "The Future Engine" and "The Russian Grave" are the most satisfactory of this group. There are several time-travel stories, including one which places Holmes on the Titanic. The authors are not jumping on the bandwagon - this collection was published in 1995 - and I found this one of the most satisfactory tales in Resnick's collection. The worst is a pretentious mixture of Holmes, "Alien," and Jack the Ripper, with the incomprehensible title of "Dogs, Masques, Love, Death: Flowers." If that story makes a bit of sense to you, you're a better man than I am, Gunga Din!Howeve! r, most of the stories are vastly better - with a respect for Holmes' essential character. One of the best is "You See But You Do Not Observe," which answers both the questions of what really happened at the Reichenbach Falls and why we have no documented cases of alien contact. There are two cases involving Holmes in the world of Lewis Carroll - with vastly different perspectives on the latter's character. And there is a delightful case, "The Adventure of the Field Theorems," which allows Holmes to poke gentle fun at the credulity of his "creator" Arthur Conan Doyle. My 8-out-of-10 rating reflects the 80% entertaining contents of this group of stories. "Sherlock Holmes in Orbit" is an excellent value for the price,and a worthy addition to the collections of Sherlock Holmes fans everywhere (and we ARE everywhere!).

Published by Thriftbooks.com User , 23 years ago
"Sherlock Holmes in Orbit" introduces a new facet to one of the most celebrated fictional detectives of all time. In this unique volume, several stories describe adventures of the great detective in the past, present and future themes. While some of the tales may seem strange and disconcerting, it is nonetheless a welcome addition Sherlock tales so valued by Holmesians. Some of the stories are reminiscent enough of Doyle's classic style--the great detective in his sitting room, with his honorable Boswell Dr. Watson near at hand. Some, though, challenge the imagination and takes away from the reader the element of familiarity of the enigmatic Sherlock Holmes. Indeed, seldom is Holmes portrayed as a computer, or as someone who had ventured into space itself to solve the most perplexing of crimes. Overall, the volume is a good read for any fan of Sherlock Holmes, or for a reader simply looking for a set of fascinating mystery stories. In most of the talkes, Holmes is up to his usual brilliance and relentless manner. He is still the energetic and paradoximal man, though now no longer necessarily shrouded by the mists of Victorian England. For the essence of the man transcends the boundaries of time and space. And yet, he is somehow present in us all.
Copyright © 2022 Thriftbooks.com Terms of Use | Privacy Policy | Do Not Sell My Personal Information | Accessibility Statement
ThriftBooks® and the ThriftBooks® logo are registered trademarks of Thrift Books Global, LLC