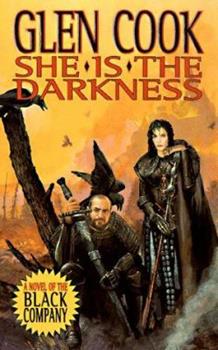 The wind whines and howls with bitter breath. Lightning snarls and barks. Rage is an animate force upon the plain of glittering stone. Even shadows are afraid. At the heart of the plain stands a vast grey stronghold, unknown, older than any written memory. One ancient tower has collapsed across the fissure. From the heart of the fastness comes a great deep slow breath like that of a slumbering world-heart, cracking the olden silence. Death is eternity...

Why does this book cost so much?

Published by Thriftbooks.com User , 12 years ago
Don't get me wrong...This is a fantastic book, but when used hardbacks are selling for over $200 and paperbacks are close to $50, I have to wonder what the heck is going on. Does anyone have any ideas All that aside, if you've read any Cook, this is about as good as it gets. His overall theme is the old cliche of "power corrupts" and his ability to bring it down to the individual level and ordinary people doing extraordinary things is absolutely fantastic.

Published by Thriftbooks.com User , 17 years ago
Yet another doozy for the Black Company. I hate reviews that discuss the plot or give a synopsis, so I won't do that. You can find enough here. This review is merely to tell anyone doubting that though this is the EIGHTH book in the series, it is still as fantastic as the first one. Rare in any series.Murgen is the narrator in this one, and is still hopping around time and place while passed out. If you don't know what I am talking about, you need to read the first seven books before even worrying about this one. The Company is still heading to Khatovar, and Soulcatcher is still being a pain. I suppose that I am discussing plot now, violating my rule, but what the heck. Long story short, Cook manages to maintain a gritty, funny, enticing and absorbing tale after 30 years of Company and thousands of pages. Bravo.

Top totty from this Englishmen

Published by Thriftbooks.com User , 22 years ago
Unsure of what my northern 'mate' in Leeds was reading after seeing his review but must agree the English-English vs the American English was spot on. Also was curious how you came upon the idea that the Nyueng Bao were supposed to represent a negative image of the Vietnamese or that war. Seems a much better way of introducing new races to the series without falling back upon the boring old ogre, orc, and elf routine!!! yeh? Would like to say that I've read the series for over 15 years now and quite agree with the majority of what our black company brothers say in the states. Cook's continued expansion of his world is ideally suited to not only roleplaying games but perhaps to a tv or movie series as well. There are colourful characters, deception, intrigue, lying, honesty, manipulation, hidden agendas, and no doubt more surprises in store for us in the eighth book (apparently titled Water Sleeps). For some interesting and indepth ideas about the books and what underlying schemes could be taking place visit one of three BC homepages (an obvious pure testament to Cooks ability to enhance the immagination) After reading some of those I'm sure you'll probably come to realise that words and phrases introduced to us in the first three books are only now beginning to make sense. For instance the first chapter in Shadows Linger quite clearly describes the skeleton which Croaker inc. saw when they entered the castle at the end of She is the Darkness. --Remember the feather---. If that isn't testament to a well developed outline for a long series of books written over 15 years then I must live in Elland Road. ......It's immortality of a sort..........

Published by Thriftbooks.com User , 23 years ago
I'll give this book five stars or a 10 or a blue ribbon or best of breed, whatever works to keep them coming. 470 pages and I got through it in 3 days,(part time,) tearing off chunks and hardly chewing them as I rushed through.It's unimaginable that this book could be read and truly enjoyed without having read previous "Black Company" books, but anything is possible. However, if you haven't read the early books, you're in for some good reading.The duty of the Annalist for this war-torn and again war-torn group of mercenary soldiers keeps changing hands, and each time, I am disappointed for a few pages, wishing Croaker was back at it, or Lady, or even One-eye. But now it's Murgen. (and maybe next, Sleepy.) Having accumulated a coat of grime and stink and the ache of fresh wounds and strains compounding old vicarious hurts, I settle in for more terror and humor and mystification until it is finished. As finished as it ever gets, and I return to reality, having had enough for a while.This is good writing. These people become friends and family and when they are gone, mourned, while someone new joins up and fills the space and becomes blood. I have absolutely no desire for this series to end. What is it about some of us that would have it this way? No closure, please. The beautiful, evil and crazy sorcerer sister- whoops! I almost gave it away. Join me, other Black Company addicts. Feast, then return later to pick up what was rushed through, chew it well and wait. There will be another. Like darkness, it always comes.
Copyright © 2020 Thriftbooks.com Terms of Use | Privacy Policy | Do Not Sell My Personal Information | Accessibility Statement
ThriftBooks® and the ThriftBooks® logo are registered trademarks of Thrift Books Global, LLC