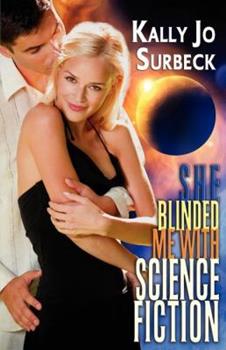 She Blinded Me with Sciencefiction (Vegas Ventures)

Klingons need love too. bortaS nlvqu' 'oH bortaS'e' Bianca Kirkland comes to Las Vegas for a little R&R of the seriously sexy sort. But you know what they say about best-laid plans... Spurred on by her best pal Gertie, she puts her move on the sculpted hunk o' stud at the end of the bar. Little does she know, they've met before. Chief of Security Colby James remembers all too well the bombshell who's hitting on him. The way she dissed his younger,...

Published by Thriftbooks.com User , 15 years ago
Gertie and her best friend, Bianca, are at a Star Trek Convention among Klingons, Andorians, Star Fleet officers and Vulcans at a Las Vegas hotel. Gertie extracts a promise from Bianca, a gorgeous blond beauty, that she will not sleep with any of the con's characters. Then Bianca gets the notion she can snare a guy without saying one word and Gertie takes her up on this bet. Looking around the restaurant, Bianca decides to pursue Mega Man sitting at the bar dressed in black. Sparks fly with just a smile. She not only gets Mega Man's attention, he decides to pursue her. The man in black tells Bianca his name is James and leaves it at that. Colby James, on the other hand, can't believe his eyes. A girl he knew from his youth has just come on to him, and she's clueless as to his real identity. He has a moment's pause for his evasion, but James is his surname. So he hasn't really lied to her. The couple go to his room. While they are in an impassioned clinch, Bianca's pager goes off. Gertie winds-up with food poisoning, so Bianca must take over Gertie's obligations at the convention. Dutifully, Bianca dons the Klingon costume, replete with forehead ridges and the dark skin tone added to her body. Bianca is thrown into the whirlwind of a Star Trek Convention and must finally admit that maybe she's a Trekkie after-all. And Mega Man James, who is he really? And when she finds out, will she make peace with him? Is Gertie really sick? Kally Jo Surbeck's She Blinded Me With Science Fiction has many amusing twists and turns. Bianca is an extraordinary beauty with feelings of self-doubt. She blossoms as she comes to terms with herself. Colby James wants to correct the mistakes of his youth and has remade himself as an adult. The chemistry between Bianca and James sizzles as they come together and fall in love. As a veteran of many local and national Science Fiction and Star Trek conventions, this is a delightful tale. I chuckled from beginning to end at the hilarious antics of these characters. I eagerly await more "Intelligent life forms" to spring to life in Ms. Surbeck's next book! Gene Reviewed for Joyfully Reviewed

Laughing while loving it!

Published by Thriftbooks.com User , 16 years ago
If people ask you why you have a funny grin on your face just hand them this book. A very good read from a very promising young writer.

Laugh out loud fun from beginning to end

Published by Thriftbooks.com User , 16 years ago
This is a great book. Funny and so much more. I laughed out loud at the antics of Bianca and Gertie. We all know people just like the two of them or perhaps, we are just like them ourselves. Colby James is a hero to die for. Sexy, charming. I recommend this book highly. You won't be able to put it down.

Published by Thriftbooks.com User , 16 years ago
I love Kally Jo Surbeck's writing. Intelligent, insightful and loaded with sexual tension, "She Blinded Me" had me alternately laughing out loud and sighing with pleasure. Bianca and Colby made a great couple and this book had me rooting for them from start to finish. With her wonderful understanding of human nature and keen ear for realistic dialog, Kally Jo Surbeck is rapidly becoming one of my favorite authors.

Klingons, Vegas, and Humor, OH MY!

Published by Thriftbooks.com User , 16 years ago
NOTE: Both of these books in the edtion were released as ebooks, but it is the first time they have been paired together and their first time in print. Kally Jo Surbeck hits the mark with her first print release. Bianca Kirkland and her friend Gertie go to Vegas for a free vacation. While there, she runs into Colby James, not recognizing him as the nerd she had dissed(well before he became the hunk he is now). Colby decides to pay her back, not telling her who he is. But plans go out the window when Gertie gets sick, then Bianca has to become a Klingon and officiate NAKED at a wedding. And worst of all, she finds herself falling in love. Included in the edition is a short story sequel called Friendly Fire. Kenny, a real life soap opera star, likes hiding behind the mask at Star Trek conventions, and thinks he has lost his chance at hooking up, but then he doesn't know Ivy. Both these stories are hilarious. Chick lit in tone, but definitely all romance, they will have you laughing and crying and thinking seriously about what really goes one at the conventions. Warm, witty, and hot in all the right spots, She Blinded Me with Science Fiction is definitely a keeper!
Copyright © 2020 Thriftbooks.com Terms of Use | Privacy Policy | Do Not Sell My Personal Information | Accessibility Statement
ThriftBooks® and the ThriftBooks® logo are registered trademarks of Thrift Books Global, LLC