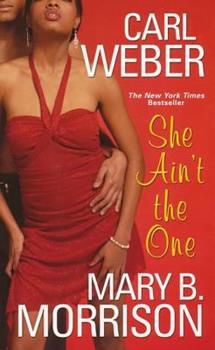 She Ain't the One

(Book #7 in the Soulmates Dissipate Series)

by Carl Weber and Mary B. Morrison

After a rocky marriage, Jay Crawford is ready for a new challenge, and finds one in the form of Ashlee Anderson. When he approaches her in a club, she almost thinks he's too nice to have to pay the price for the last man who mistreated her. Almost. But Jay's not so nice, and a one-night stand turns into months of hot love-making.

Published by Thriftbooks.com User , 2 years ago
This was a great book. Baby this woman was super crazy its sad to think that they really have people like her in real life. I would have said oh hell no. But overall this was worth every single penny!

Published by Thriftbooks.com User , 14 years ago
I guess Ashlee was not the one in this book, this girl flipped out and was tripped out,sometimes u can see where she was coming from Jay doing her like he did,but the title should've been This B---- Is Crazy!!!

Be Careful What You Wish For

Published by Thriftbooks.com User , 14 years ago
What do you get when you combine Jay, from Carl Weber's best-selling novel, Married Men and Ashlee, from Mary Morrison's bestselling series? The result of this literary duet is SHE AIN'T THE ONE an explosive, drama-filled page turner. Ashlee and Jay cross paths when Jay comes to her rescue when an overzealous suitor won't take no for an answer in a D.C. nightclub. During their weekend together, readers learn the positives and negatives; ins and outs of each individual. Ashlee is on the rebound from a dysfunctional, destructive relationship with Darius, the father of her child, to whom she has lost custody due to her psychological issues. Jay is a recent divorcee who moved to D.C. with the hopes of reconnecting with the love of his life. After a series of telephone conversations, a long distance relationship develops between the Ashlee and Jay. However, things don't remain peaceful or happy for long. Jay returns from a weekend visit with Ashlee and has an unexpected meeting with an old flame. Ashlee does not know whether or not she has been X'ed out of the equation and replaced. Rather than wait to find out, Ashlee begins to do things that make Glenn Close from in Fatal Attraction look sane. SHE AIN'T THE ONE is a great read. As a reader, I have often wondered what would happen if a character from Author A's book hooked up with a character from Author's B book (you can fill in the blanks). Weber and Morrison have effortlessly seamed together their characters and created a story that could happen in everyday life. I have read the complete collection of both authors and found this novel to be true to both writer's styles. As a matter of fact, I think Morrison wrote Jay's sections and vice-versa. The writing styles of both authors mesh seamlessly, creating a final product that is HOT!!!!!!!!!!!! Reviewed by Katrina G for The RAWSISTAZ Reviewers

No, She Aint The One

Published by Thriftbooks.com User , 15 years ago
Having been betrayed by her son's father, Darius, Ashlee is on a search to find a way to rid herself of her feelings of love for him. For the life of her, she could not stop loving him, even after he married someone else and had her son taken away from her. Traveling to D.C., Ashlee meets Jay, a handsome man who she felt approached her with respect, who she soon began to plot and plan to get her claws into. He did not run the usual lines or game on her and Ashlee found herself falling head over heels in love with the obsession of loving Jay. Jay falls hard himself, having just gone through a divorce and moving to the D.C. area from New York, leaving his two daughters behind with their mother. He was on a search for his son's mother, but in the meantime he meets Ashlee, who is convinced that he has fallen in love with as well. This causes him to miss some of the signs and ignore others as Jay is on a quest to prove not only to himself, but to his boys who admonished him to listen to them. Instead Jay almost hangs himself with a proposal that gets thwarted by the very person he knows he still loves and wants to spend the rest of his life with - his son's mother, Tracy. Ashlee does not accept and neither does she take kindly to Jay's decision to let her go, so she takes her obsession mode to a heightened level that changes Jay's life and the lives of his children for years to come. Ashlee lets Jay know that she ain't the one to mess with by how she gets back at him for hurting her after giving her the love and loving she so desperately needed and then taking it away before they could complete it. For sure, she ain't the one. This story of getting even hit new highs and lows as Authors Weber and Morrison co-write this story, their voices complimenting and bouncing off of one another. Review by Sharel E. Gordon-Love Apooo BookClub

"...A spellbinding read that will grip the eyes of readers to every page."

Published by Thriftbooks.com User , 15 years ago
" A mind-blowing tale can be found in She Ain't The One. This explosive novel is truly remarkable." "Ashlee Anderson is a psychotic woman who is disillusioned at best. She falls in love with Jay Crawford a divorcee with children who is still in love with the woman he had an affair with during his previous marriage." "Ashlee and Jay meet in a club and shortly thereafter they become inseparable. Life and love is good for the both of them that is until Ashlee decides she no longer needs to take her medication and becomes totally obsessed and paranoid over her relationship with Jay." "Ashlee has a past that Jay is not privy to, a past of destruction, manipulation and lies. She is dangerous and deceptive. Signals are given, but the question is will Jay take heed and get out of the relationship before its too late." "Carl Weber and Mary B. Morrison have joined together and created a spellbinding read that will grip the eyes of readers to every page."

She Ain't The One by Carl Weber & Mary B. Morrison

Published by Thriftbooks.com User , 15 years ago
What do you get when two blockbuster authors (Carl Weber & Mary B. Morrison) team up to bring together 2 favorite characters from their previous novels? You get "She Ain't The One". Jay Crawford is back on the prowl after losing the love of his life and he is ready to move on. After a chance meeting at the club, he meets Ashlee Anderson.....beautiful, intelligent, sexy...Ashlee appears to be the "one". But little does he know, his life is about to be forever changed....Ashlee is recovering from a nervous breakdown and determined to get over the love of her life Darius. When she meets Jay, what is supposed to be a one-night stand turns into love and soon obsession. At first things go well as passion clouds judgement but the warning signs are there and soon Jay begins to see what his lust wouldn't. Trying to break away from Ashlee proves to be harder than he thought and soon, he is in for the fight of his life. She Ain't The One by Carl Weber and Mary B. Morrison is a passionate story that grabs the reader's attention from the beginning to the shocking ending that will have you talking for days! In typical Mary B. Morrison fashion, it is drama-filled, and steamy while Carl Weber proves once again, why he is the king of drama. Reviewed by Shay C of PeoplewholoveGoodBooks
Copyright © 2020 Thriftbooks.com Terms of Use | Privacy Policy | Do Not Sell My Personal Information | Accessibility Statement
ThriftBooks® and the ThriftBooks® logo are registered trademarks of Thrift Books Global, LLC