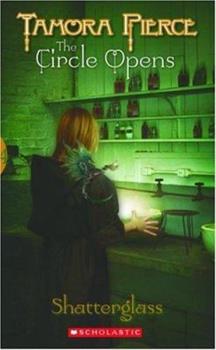 Part of the 8-book Tamora Pierce reissue for Fall 2006, this title in the Circle Opens quartet features spellbinding new cover art. Coincides with the release of WILL OF THE EMPRESS in trade pb. Kethlun Warder was a gifted glassmaker until his world was shattered in a freak accident. Now his remaining glass magic is mixed with lightning, and Tris must teach him to control it (if she can teach him to control his temper first). But there's more at stake...

Shatterglass is both magical and exciting!

Published by Thriftbooks.com User , 14 years ago
Shatterglass is an exciting fantasy by Tamora Pierce whom in my opinion is one of the best authors in the world! In this last book of the quartet Tris, a fourteen year-old mage with extrordinary powers ends up meeting a man named Keth. Though he is older than her in atleast his mid-twenties Keth has no idea that he has a magical gift that has to do with both glassmaking and lightning mixed. When Tris discovers his power it is her job to teach him how to controle his magic. As she works with her new student a murderer arrives in the city and is killing women performers almost everyday. Keth and Tris must combined their powers to catch the criminal before its too late! -Hannah M.

Published by Thriftbooks.com User , 15 years ago
Warning: Spoilers may be within text This fourth and last book of the Circle Opens by Tamora Pierce has really ended the series quite nicely. Trisana Chandler (Tris) and her teacher, Niko Goldeye, travel to Tharios for a convention of mages. While her stay in Tharios promises to be exciting, Tris finds that the city is not at all to her taste. While the music, performers, and glassmakers are superb, she finds that the way society is defined is offensive and repugnant. For instance, prathmun, the city's lowest member of society, are unable to participate in most city functions, are treated with scorn by the people, and must handle the worst jobs in the city. At times, they are even considered bugs by the people. Tris, being a fair and kind (although sometimes hot-tempered) mage, is outraged. But her troubles are far from over when she discovers a glassmaker, Keth, who has the power of lightening magic as well as glass magic. Finding no other teacher in the area to instruct him in magic's proper use, she undertakes his training. The problem? Keth is an adult, whilst Tris is a 13 year old adolescent still struggling with her own powers. To top matters, a murderer is stalking the city, killing the actresses and the female performers (the yaskedasi) of the city and then displaying their corpses in public places. Enraged by the contamination of the city, the government officials use every one of their resources to track down their killer. Keth and Tris both utilize their powers to track down this killer in the hopes that the deaths will stop. The rest...you'll have to read for yourself. As for my opinion on this novel, it's great. The characters are wonderfully written and the personalities are written with great detail. For instance, Keth, an adult violently objects to a teacher for his powers fearing change as many adults do. Pierce is even able to accurately portray the emotions that plague Tris, who after all, has not had much experience in the world. The suspense is also a key factor that is well played. Each page keeps in a trance such that you'll never want to put down the book. Pierce even ties in problems in our own societies into the book including the treatment of those less fortunate (i.e.: the prathmun are a relation to the "untouchables" in India or the slaves in colonial times.) Pierce also understands that no good novel is without its touch of strong emotion. She builds the feelings by killing off a character and creating situations where characters are torn with indecision. Overall: This is a wonderful read that will certainly capture your imaginations. However, this is a book that composed mostly of fiction and the world of fantasy. Should you be opposed to the idea of magic, I strongly suggest that you do not pick up this book.

Published by Thriftbooks.com User , 16 years ago
While I have enjoyed seeing Tris get herself into trouble and work on getting herself out of it, it's definitely nice to see that there is someone out there who is worse tempered than she is. It's also refreshing to see her in a different light than before. She has perhaps grown more, and can relate to the Glaki, which is nice to see!

Published by Thriftbooks.com User , 18 years ago
It was wonderful. I've read all of Tamora Pierce's books, and I think Shatterglass is one of the best, mostly because Tris is my favorite character. The only annoying part I can find is that it is less interesting when Tris has control of her power, but she is older so she had to get more control. To make up for this her new student doesn't have that great control, so it makes it more exciting.

Tammy does it again!

Published by Thriftbooks.com User , 18 years ago
Next to the street rat Briar, Trisana "Tris" Chandler has always been my favorite member of the circle. There's something about this fiery redheaded weather witch that just fascinates me. In this book Tamora Piece takes one of my favorite mages and gives her a great book to star in. Like every other book in the circle opens trilogy, Shatterglass deals with the members of the circle finding a mage student, and a crime. Street Magic had gangs. Cold Fire had an arsonist. Magic Steps has the mob. Shatterglass takes it a step father and introduces a serial killer.Tris is staying in Tharios so her mage teacher, Niko Goldeye can take place in a conference on wind scrying. Tris enjoys Tharios and the glassmakers that live there but she hates the mistreatment of the prathmuni, the lowest class who deals with death and garbage. One day she stumbles upon a glass mage named Keth who, from an experience involving being stuck by lightning, has had his glass magic contaminated by lightning magic. Because of this he can no longer fulfill his job as a journeymen glassmaker. Tris realizes that he is a mage right away but Keth won't believe it, at first. Suddenly, as one of the few lightning mages, Tris finds herself as Keth, a grown man's, new teacher. Meanwhile a series is murders is taking place in Tharios. The city's entertainers, the yakedasi, are being killed and then displayed in public places. This greatly hurts the Tharian culture which places so much on purity. Tris and Keth accidentally realize that with Keth's lighting and glass ability, he can really help find the killer. Unfortunately in order for him to do this he not only needs to get his new found magic under control, but get rid of his fear of lighting. Can Tris and Keth find the killer before he kills someone close to them?I absolutely loved this book! Once again Tamora Pierce does not disappoint. Tris and Keth's story is suspenseful and a tab shade darker than the other books in the series. The setting of Tharios is very new and different. It's such a city that considers themselves to be democratic, but only if your int he higher classes does your opinion count for anything. I would highly recommend this book. In fact, the Circle Opens quartet is my favorite series by Tamora Piece so far. It's a shame that we'll have to wait a couple more years until we receive another Circle book. Until then, I can't wait until her new Tortall book, Trickster's Choice, comes out this fall! I hope you enjoyed this book as much as I did!
Copyright © 2020 Thriftbooks.com Terms of Use | Privacy Policy | Do Not Sell My Personal Information | Accessibility Statement
ThriftBooks® and the ThriftBooks® logo are registered trademarks of Thrift Books Global, LLC