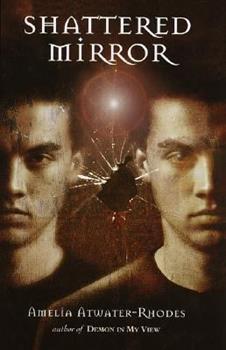 (Book #3 in the Den of Shadows Series)

Sarah Vida is a witch and a vampire hunter uaand a loner. Christopher Ravena is a vampire trying to pass as a normal high school student who wants to know Sarah better. Drawn to him despite her better judgment, Sarah's forced to admit that there's room for gray in her otherwise black-and-white world of good versus evil uauntil she meets Nikolas, Christopher's twin and one of the most hunted vampires in history.

Published by Jax Soder , 1 year ago
Unnatural pairing at long last turned to love for these characters

My First Review for Shattered Mirror

Published by Thriftbooks.com User , 18 years ago
This book is the best Amelia Atwater-Rhodes book ever! And maybe even on the top 5 list of my all time favorite books! Sarah Vida is a young witch of the Vida line, the strongest and cruelest of all daughters of Macht. All of the Vida line are sworn never to befriend vampires, and to track down vampires to kill them. But however she tries to be like her self-controled mother, or her sister, she never can be a true cold blooded killer.When she moves into a new neighborhood, she meets two vmapires and her school- Christopher and Nissa Ravena. They are highly artistic, kind, and weak; the kind that would never be a danger to her. When her sister, Adianna, finds out, her problems get worse. And to all that, she must tell Christopher that he must desert her, even though they love each other.But the worst is yet to come. Hunting Nikolas, a infamous vampire, murderer of Elisabeth Vida, and totally deadly; she finds out the terrible secret. Nikolas is Christopher's brother. Happenings with a tormented teenage girl, a Halloween dance, and a couple of bashes in between, leads to a choice that might change the course of the Vida line forever. I loved this book so much because mainly two characters: Nikolas and Christopher. Nikolas is sort of like Jaguar, deadly and icy-cold, yet loyal and caring. I was also fasinated by his apperence-black and white. His tenderness to his brother and Christine, and his deadly coolness towards Sarah and witches. Christopher is a totally different person altogether. People at first sight think he's weaker than Nikolas, but his iron self-control and devotion towards Sarah make him a great character.

Yet another Vampire story by the Horror-Queen!

Published by Thriftbooks.com User , 19 years ago
This book unfolds around Sarah, youngest daughter of the Vida Line. In this story, vampires are bad, humans are good..and witches are in between. The witches job is to slay vampires to protect the human race. Sarah, has been trained nearly all her life to slay vampires.Tthe first day of school she senses two people as vampires. Nissa and Christopher, who are too weak to sense Sarah's powers. She first takes the impression that they are dangerous but soon she realizes then are not. As this book continues you'll realize many things. Although this book seems confusing from time to time, the plot is awesome and will have you guessing. I think if you enjoyed other books by this author, like I did...you'll find Shattered Mirror just as great! I highly recomend this for the Atwater fans, and I know there are plenty. Other books that are awesome, written by Amelia Atwater Rhodes are : In the Forests of the Night, Night Predator, and Demon in my View. I can't wait for this author to write and publish more!

An introduction to a world full of danger and suspense

Published by Thriftbooks.com User , 19 years ago
This book was sort of different than Atwater-Rhodes first two books, but equally as satisying. Sarah Vida, daughter of the leader of one of the most dangerous witch families, is an avid vampire hunter. She is currently following a vampire party circuit, and she gets launched into it in a way that violate all of the witch laws and the twists and turns of this novel surprised me thoroughly. In this book Atwater-Rhodes veers off her course of describing the lives of the more powerful of the vampires, instead describing the lives of the more viscious vampires, but less powerful. the ending was mildly disappointing, but the rest of the book more than made up for it. I was sort of hoping that Ms. Atwater-Rhodes would write about one of the older vampires, such as Fala, Jager, Ather, or even Silver himself. But if you want an action-packed novel with suspense and excitement, then this should be your pick!!

Amelia did it again

Published by Thriftbooks.com User , 19 years ago
Once again Amelia has brought us to her world of vampires and witches. Like her previous two I was unable to put Shattered Mirror down. Introducing us to more of the witches side of things was a great thing. And I hope we get to see more of our favorite vampire Aubrey in the future. If you like any books with vampire lore in it I surely suggest all three of her books.

Another thriller from Amelia Atwater-Rhodes.

Published by Thriftbooks.com User , 20 years ago
For seventeen-year-old Sarah, the world has always been a black and white place, where a distinct line exists between good and evil. The humans are good. The vampires are evil. And in between exists the witches, who use their powers to protect humanity by killing vampires. As the youngest daughter of the Vida line, Sarah has been trained nearly all her life as a vampire hunter. On her first day at a new school, Sarah recognizes a brother and sister, Christopher and Nissa, as vampires, but the pair, who no longer kill to feed, are too weak to sense who she is. At first, she views the pair as dangerous, but she comes to realize that they have managed to keep some part of their humanity. But in the process of hunting down Nikolas, an evil vampire the Vidas have sworn to destroy since the day he killed one of their own over a hundred years ago, she discovers just how dark Christopher's past is. Fans of Amelia Atwater-Rhodes previous two books are sure to enjoy this one as well.
Copyright © 2020 Thriftbooks.com Terms of Use | Privacy Policy | Do Not Sell My Personal Information | Accessibility Statement
ThriftBooks® and the ThriftBooks® logo are registered trademarks of Thrift Books Global, LLC