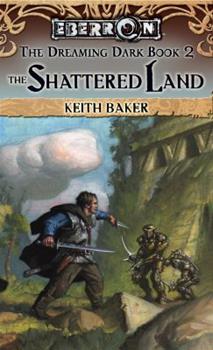 As Daine, the hero of The City of Towers, confronts his possible mortality, his friends team up with a mysterious woman to embark on a quest to the dark continent of Xen'drick, where they hope to find the only cure that can save Daine's life. Original.

Published by Thriftbooks.com User , 13 years ago
The first book was an interesting perspective and left the readers with a good taste of what Eberron had to offer. The 2nd book in the Dreaming Dark triology is a step up in perspective. It follows a different narrative perspective and noticably style. In relation to the first book, which had seemed to be taken from notes of an actual game session then compiled into a book; this novel seems to be a geniune "run of the mill" style writing. The story arc is well driven with installment and powerful to the end. My personal opinion about the book is that Shattered Lands is a great follow up. The writing style in the first was very unique and I wish he would have continued to this novel. I have the sense that this title may have been ghost written. If so, plans Keith made for this story is marvelous. I am looking forward to more stories in this vein.

Another great exposition of Eberron

Published by Thriftbooks.com User , 14 years ago
The second book of the Dreaming Dark trilogy has the companions sailing south to the strange continent of Xen'drik. The book gives a good history of the ancient giant civilization that once ruled the continent and it's fall and the rebellion of the giants elf slaves. Great storyline, emotion and all around adventure! Great book!

Keith Baker accelerates the story to another level.

Published by Thriftbooks.com User , 14 years ago
Keith Baker's second insallment of the Dreaming Dark trilogy is even better than the first. The story takes on a much more mysterious and important feel. Plenty of dark secrets about the characters and their fates are hinted at. The adventurers from The City of Towers return in this one to travel to the land of Xen'Drik (or something like that), where they face all kinds of unique and unexpected challenges. Drow elves (with a very unique background) and rogue war-forged hold dark secrets and rule the isolated land with powerful magics. Fate plays a big part in this story, with the characters being drawn into events that seem way over their heads but are nonetheless theirs to experience and deal with. Lei and Pierce play larger roles in this second book, sharing more of the "main character" spotline with Daine. The book has a pretty exciting climax, but just when you think you finally understand what is really going on, you're thrown for another loop. The book ends with a dramatic cliffhanger, begging you to run out and by the next book ASAP. Read the Dreaming Dark trilogy, you won't be disappointed!

Published by Thriftbooks.com User , 15 years ago
That difficult second album. Sometimes it is really hard to follow up on a novel that most people found to be fantastic. Sometimes the middle book can be a little bit of a let down, as it is simply the second act of a play and rarely has a satisfying end. Here though, Keith Baker has crafted a book that exceeds his first novel, and has enough action, intrigue and character building to keep you flipping those pages. The book does end on a cliffhanger to end all cliffhangers, but it just means that we will be rushing out to get that last volume the minute it hits the shelves. This book is The Dreaming Dark's equivalent of Aliens to Alien, Superman II to Superman, The Empire Strikes back to Star Wars. But I have a feeling that his last novel in the series will not be a Return of the Jedi or Superman III. This book takes you on an adventure across Khorvaire to a land that we know very little about, Xen'drik. Along the way Keith Baker adds so many layers to his characters it is unbelievable. We now have a group of people that we genuinely care about. To be honest I was not bothered either way what happened to them in the first book, but whilst reading this I was panicking at the thought of anything this group of adventurers. I loved the new elements that were introduced in this novel, namely the adventures on Xen'drik. I really enjoyed the Xen'drik drow. These are a race that could have been done so wrong, playing on the cool factor of the drow from Forgotten Realms, but Keith has done enough to make them as different and fresh as possible and at the same time make them as deadly as ever. I am really looking forward to the final volume now, and have a new found respect for this man who only released his first novel about this time last year. Keith Baker - I salute you!

Published by Thriftbooks.com User , 15 years ago
Too often a sequel or 2nd part of a trilogy will be somewhat of a letdown. I felt that way about Two Towers compared to The Fellowship of the Ring. With City of Towers, Keith Baker introduced us to a short list of characters that were to start on a epic life journey. Notice I said "life journey" and not quest. Although I found the first book in this series to be fairly good, I had trouble getting into the setting of Eberron and understanding some of what Keith Baker wanted us to know and appreciate about his fantasy world. Well, let me tell you folks, this book more than steps out in front of City of Towers - it far surpasses that first book! Baker is definitely getting better as a writer (and so are his editors, as I found much fewer errors in this novel than his first). This is a "cannot put it down" adventure novel, with a much better development of characters than the previous book. The dialogue seems to be improving, too, as the character of Daine provides a good example in this novel. For those interested in Eberron's role-playing aspects from the D & D RPG, this book will help add to the players' knowledge base and understanding of what it means to 'play' in the world of Eberron. Xen'drik is wonderfully featured here, in all of its obscurity, from Stormreach to the jungles themselves. The drow are portrayed in an interesting way, as a cross between Zulu and native American warriors. Its the old D & D drow taken 90 degrees away from its predecessor. For those not interested in RPGing but just a good adventure/fantasy story, this book should easily fill that desire. My father is an old fantasy reader, not much knowledge of D & D, and he was able to appreciate and be entertained by the first book. I know this book will be devoured in one day's sitting when I finally let him borrow it. In short, an excellent fantasy/adventure book with suspense galore. Keith Baker, you've got my vote for best fantasy book of 2006, and it's only February!
Copyright © 2020 Thriftbooks.com Terms of Use | Privacy Policy | Do Not Sell My Personal Information | Accessibility Statement
ThriftBooks® and the ThriftBooks® logo are registered trademarks of Thrift Books Global, LLC