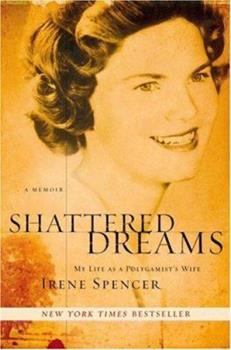 Shattered Dreams: My Life as a Polygamist's Wife

'Shattered Dreams' is Irene Spencer's true story of 28 tumultuous years in a 'plural marriage' in which she was one of ten wives.

A first-rate family history from inside a fundamentalist polygamous sect

Published by Thriftbooks.com User , 15 years ago
Shattered Dreams is the autobiography of Irene Spencer, a woman raised in a fundamentalist polygamous sect of the Mormon faith. Irene was raised to honor the Principle (of plural marriage and reverence for the sect leader) to achieve eternal salvation. Despite her own mother abandoning the Principle, and despite a suitor who promised Irene a monogamous, mainstream lifestyle in the LDS church, Irene married a polygamous man in 1953 at the age of just 16. From girlhood through motherhood, Irene grappled with her own mortal desires to have a husband all to herself, to bear only as many children as she could afford, and to achieve stability and financial security. As a member of a polygamous sect, Irene prayed to banish these selfish desires and worked to obey her husband's desire for a kingdom of seven (or more) wives, which would ensure him godhood in his faith. Polygamy is punishable by ex-communication from the LDS church, so Irene's marriage was a secret from her closest friends and family members until her husband moved Irene and his first wife, Charlotte, to rural Mexico, where they could avoid both LDS scrutiny and the law of the U.S. With their husband Verlan, Irene and her nine sister wives moved across Mexico and South America in search of farming and business ventures that would ensure their survival. She lived in unfinished homes without running water or electricity for most of her life, but she formed a community with the local Mexicans, sharing U.S. surplus clothing and blankets as well as food. Irene even adopted a local abandoned baby who was turned out by the family patriarch. Her stories are humorous and heart-warming, despite the fact that in reality, her family was constantly at the edge of survival. Irene is a terrific storyteller who often ends a chapter with a zinger of a punch-line. From the title of this book, I expected to read more ruminations on the "shattering" of dreams. Irene's story is no tell-all expose against polygamy. She left the lifestyle after she was widowed, and she has lived in monogamy for the last two decades, but she does not crusade against her former sect. Irene has instead chosen to share the story of a wife and mother struggling to find balance and contentment in life. The reader is left to draw his or her own conclusions from Irene's life of poverty and personal sacrifice. The author does mention inter-sect murders and power struggles, but only in passing, because she was consumed with much more immediate pressures to feed and clothe her thirteen children. Later in her marriage, when her husband courted a new teenaged wife (a girl of only 14 years who was friends with Irene's oldest daughter!), Irene questioned him outright about the girl's suitability for marriage, but finally conceded to her husband's desires and blessed the marriage. Irene Spencer has written a first-rate family history for her legacy of children and grandchildren (most of whom chose not to live in the Principle)

Published by Thriftbooks.com User , 15 years ago
I agree with all prior comments. Irene Spencer's narrative flows as if she were a guest in your own parlor. She is factual without seeking self-pity. And as your jaw drops at some of her statements you find yourself wondering if in her situation..YOU could be so compassionate and forgiving! It's a refreshing read, atypical in lacking the seething, get- even anger of too many women's books.In this well balanced assessment of her life she extends love and understanding to most all caught up in world of Mormon fundamentalism. .I would add...I couldn't help but see a similarity between her experience and that of many "sisters" caught in , polygamous or not,other fanatical fundamentalist religions burgeoning today. They all have in common male domination through prohibition of higher education for females,enforced obedience through brainwashing techniques involving fear and guilt, and above all...the proverbial "barefoot and pregnant"...usually quite literally!! What I have come to realize, and this biography well dramatizes that fact,fanatical fundamentalism of WHATEVER persuasion always backfires because the very nature of its extreme rigidity becomes as constraining to the male as to the female he seeks to control! Kudoes to this tremendous woman for her survival with sanity in tact and I look forward to part two!!!

A page turner from start to finish...

Published by Thriftbooks.com User , 15 years ago
I grew up in Utah as a non-Mormon. I had always believed that the fundamentalist Mormons were a sick, twisted cult that thrived on child molestation and sex. After reading Shattered Dreams, I see that many of these people were living a life of sacrifice for what they truly believe in. I do not believe in Pologamy or Mormonism 'fundalmentalist or otherwise', but I do understand their plight a great deal more. I have a mountain of respect for Irene and what she endured and sacrificed for 28 years of her life. I could not say that I could be as true to, and as passionate about my religious beliefs, to endure a life of poverty, disease, lonliness, neglect, depression, filth - the list goes on and on. I would have left that life LONG, LONG before Irene finally did!! Personally, I found the book very inspirational. When I think about the way that Irene and her children lived, and how other plural wives are living their lives today, my worries and problems seem almost trivial. This was a great read. Highly recommended!

Published by Thriftbooks.com User , 15 years ago
Irene Spencer, in her first book Shattered Dreams, speaks boldly from the heart of a woman oppressed by a patriarchal religious cult and powerfully bares her life of loneliness, longing and determination to overcome. Her story chronicles the severe pain of sharing a husband with nine other wives all vying for her husband's attention and affection. She lived in abject poverty in the Mexican desert, raising 13 of her husband's 58 children, often without running water or electricity. Shattered Dreams reads like a page-turner novel and finishes strong. I quickly found myself cheering for Irene as she overcame each obstacle and bravely chose to take control of her life.
Trustpilot
Copyright © 2022 Thriftbooks.com Terms of Use | Privacy Policy | Do Not Sell My Personal Information | Cookie Preferences | Accessibility Statement
ThriftBooks® and the ThriftBooks® logo are registered trademarks of Thrift Books Global, LLC