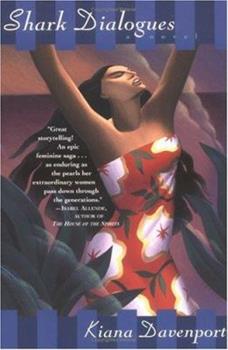 Great way to learn the history of hawai’i.

Published by Donna Hurley , 3 years ago
Been reading many historical fiction books about this time frame and area. I love learning about a single event, e.g, the colony at Kalaupapa from different viewpoints and different authors. Maybe a spoiler: i liked the element of the spiritual in the land. It is such a living part of Hawai’i. You can feel it when you are there and you believe all the “stories” when people talk story. I loved how she became a shark and a part of the earth.

The story of Hawaii itself

Published by Thriftbooks.com User , 22 years ago
Written by a woman of Hawaiian descent who clearly loves her people, this family saga is the story of Hawaii itself. The central character is the matriarch Pono, whose life includes harsh realities and surreal myths. Her long and passionate love for her husband Duke has caused her great joy, but the situations they had to face together have required strength and courage.Pono's four adult granddaughters, each born of a different mixed blood heritage and who now live in various parts of the world, come back to Hawaii to visit, forcing them all to come to terms backgrounds.Their stories are all revealed though flashbacks, going all the way back through seven generations, mixing history with myth in a wonderful array of unforgettable characters. I'll never forget the story of life in a leper colony, or of life on a plantation. I'll long remember the mythical quality of the sea and its ability to both nourish and destroy. There's life and death and passion and joy. There's war and peace and destruction by both human greed and natural forces.At 480 pages, this is a book to sink into and look forward to reading at the end of the day. A book that brings the story of Hawaii alive to the reader and a fresh retelling of truths and legends

Published by Thriftbooks.com User , 22 years ago
As I read this story, there was so much deep mana'o going through my mind. Although this is fictional story, it is a very real depiction of lives forever changed from generation to generation. Kiana has brought to paper the "real" lives of "local" island characters in her story and myself being a "born & raised" hapa (truer to my Hawaiian roots) I could relate to the characters portrayed in this story. I had the "Pono" in my life (my great grand-mother), my grand-uncle was a leper on Kalaupapa who was sheriff there, I have aunties who are educated and are sovereign activists, I have stories in my ohana like many of the characters in this book and I relate to the feelings of Jess (hating the white skin, but adhering to the white world and embracing the white way of life) loving the culture of my ancestors and the heritage of my past, and the pain felt for the lives upturned for those by just living in a coveted world. It's so hard to explain the emotion this novel creates within me, for the fire still burns inside of the injustices done to Hawaiians. Kiana has truly done her literary homework and for those who don't understand her writing, it just goes to show the justification of the characters depicted, and this novel may be FICTION as far as some of the historical content is concerned, but that history is REAL and has happened in different parts of many people's lives. IMUA Kiana!

This is the most amazing Hawaiian novel I have ever read.

Published by Thriftbooks.com User , 22 years ago
Davenport, Kiana. Shark Dialogues. New York, Plume, 1994. 492 pages. This is the most amazing Hawaiian novel I have ever read. Kiana Davenport's literary gifts, for fascinating, image-rich narrative of astonishing versatility and for unforgettable characters promise to lift her to world class status as a novelist. This is a story of Hawaiian women, four generations of them, but with the 1990's focus on five of them, a grandmother of mythical and awesome presence and her four granddaughters, with fathers and husbands of differing ethnicities, the girls' fear of her and her hold on them, and the unfoldings of their mostly tragic loves and search for identities. So gripping and spellbinding is the narrative that I am tempted to call this a women's book for men who don't care for women's books. These women's lives are as lively and perilous as those in a good thriller, but with an important difference. Their stories leave the reader with real insight into the desperate ambiguities that dog the lives of part-Hawaiian women in the 90's. The book is, at first glance an historical novel, but be warned: the real events and geographies are outrageously juxtaposed with fictional ones and suborned in the maelstrom of the narrative. Davenport is true to her characters, and those who know Hawaii will recognize the essence of familiar personalities. But at the same time that they will be dismayed at many mis-renderings of places and events they know well. Some of these are bloopers that would have landed a lesser book in my trash bin, but Davenport redeems herself in her fictional characters. Authors never do so in print, but I am inclined to blame her editors. Who should read this book? Women with imagination, certainly, and men who admire women. For all the grief men bring to some its characters, the book is not anti-male. Anyone who seeks insight into the emotional lives of ethnically mixed people will find much to reflect upon. Finally, if you really love to read, this book is for you. -Bryce Decker

Published by Thriftbooks.com User , 23 years ago
As a professional Geographer I got interested in Hawaii long ago. I lived there, I studied there, and then I returned to grey, cold and rather unimaginative Europe where my memories of mystical Hawaii almost faded away. But then a chance encounter: my wive - a "Pacific Island Girl" herself, discovered Kianas fascinating book. And there it was again: Shark Dialogues brought back my fascination for one of the most unusual cultures on the face of the Earth. Beware: This book is not well suited for arrogant westerners who believe that they are anything special, let alone the "crown of creation". This book opens the gate to a different world and a people and their culture that was no less sophisticated than that of the Europeans who discovered them - in some ways it even was superior. The book carried me away...

A magical saga. I loved it.

Published by Thriftbooks.com User , 24 years ago
"`SAILORS, LEPERS, OPIUM, SPIES--with such a family history, how could we be anyt'ing but sluts?' Dese Jess's last words to her grandmot'er, Pono. Dat night Pono walk into da sea." Thus, begins this wonderful book of story, saga and myth. As I read Shark Dialogues I grew to understand the power and sacredness of the Hawaiian Islands. Also the complexities of the people who have inhabited them. Complexities presented to us with complex and well defined characters -- Women characters! It was so nice to delve into powerful women characters. Beginning with Kelonikoa, a Tahitian princess on the run in the 1800's. From Kelonikoa came a pouch of black pearls, a diary, and a heritage of strong, tenacious women. Her daughter Emma, Emma's daughter Lili, Lili's daughter Pono, and Pono's daughters and grandaughters. Pono, the most powerful, like the sea. Pono, who could dream-see and swim with sharks. Pono, who could be so cruel. Pono, who scared everyone, especially her grandaughter's Jess, Vanya, Ming and Rachel, all the fruit of this woman. This book beautifully shows the continuous cycle and circle of life, as we repeat our ancestors as ourselves. Here, as mothers struggle to love and raise their daughters, and as women seek the same over and over, in their lives, their love and their men. Shark Dialogues is personal, political, historical and magical.
Trustpilot
Copyright © 2022 Thriftbooks.com Terms of Use | Privacy Policy | Do Not Sell My Personal Information | Accessibility Statement
ThriftBooks® and the ThriftBooks® logo are registered trademarks of Thrift Books Global, LLC