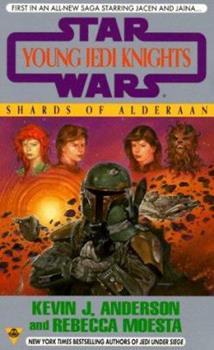 When the Empire died, they were born'a new hope for the New Republic. The young twins of Han Solo and Princess Leia have taken their first steps as Jedi Knights, defeating the evil minions of the Shadow Academy. Now, with their friends Tenel Ka and Lowbacca the Wookiee, the future heroes of an already legendary saga continue their training. Jacen and Jaina set off the for the Alderaan system, determined to salvage a piece of the shattered planet as...

Pensive, atmospheric...eventually trails off into repetition

Published by Thriftbooks.com User , 13 years ago
The Young Jedi Knights books come in exactly two flavors: there are the wild adventures that lose emotional impact by virtue of their undisciplined exuberance...and then there are the slower books with more emotion and less story. SHARDS OF ALDERAAN falls squarely into the second category. Despite its lack of narrative direction, it's one of the most memorable of all the Y.J.K. books. The plot is slow but never dull: its languor is a result of emotional sensitivity rather than lack of enthusiasm on the authors' parts. Anderson and Moesta don't plunge immediately into the next galactic crisis, but instead examine the aftermath of the previous book's climactic battle. Their melancholy treatment of adolescence contrasts starkly with the series' typically jolly tone. Most importantly, the reader feels that the characters have actually developed over the course of the series; they don't hyperspace jump between puberty and adulthood, but grow realistically. One of my greatest frustrations with the subsequent New Jedi Order series was the assumption that war could instantly transform the characters into numb killers. That's a cheap justification to make the Young Jedi Knights "grimmer and grittier" - hence, more marketable. Anderson and Moesta, on the other hand, aren't concerned with sex appeal. They sympathize with the confusions of young life. In other stories, Anderson and Moesta too often descend into exposition. Not so in SHARDS OF ALDERAAN: it's sleek prose from beginning to end. The authors intersperse every paragraph with atmospheric details, so that the description never overpowers the narrative but nevertheless builds a complete world. Mood is palpable, a thunder cloud hanging over the story. It's fortunate that mood occupies most of the reader's attention: the plot is so lightweight that it flutters for entire chapters and finally just blows away on the breeze. Actually, the entire storyline revolves around a desperate quest for a...birthday gift. Thankfully, the idea is not as farcical as it sounds - in fact, it conveys a better sense of family ties than most of the Y.J.K. books. But it's stage dressing for characterization. After Anderson and Moesta have spread the emotional subplots thinly across every page, they resort to repeating the same scenes over and over again. Still, their voice remains rich to the close, which more than compensates. The conclusion approaches sentimentality but finally settles into comfortable warmheartedness. No worries: that descent looked a little rough, but the landing was right on target! SHARDS OF ALDERAAN isn't the sort of book you can sell on plot summary alone. But every story needs this sort of calm intermezzo between adventures. Of course, there are always storms on the horizon - savor the introspection while it lasts!

Great Book U should read this book

Published by Thriftbooks.com User , 22 years ago
I loved this book it is very suspendful. But the book wasn't as good as all the other Young Jedi Knights. The book I think u should read would have to be Jedi Under Siege. This book has a descent amount of action in it. I especially like the part when Zekks friend dies.

A Good One For Boba Fett Fans

Published by Thriftbooks.com User , 22 years ago
Awesome book for Star Wars fans and Star Wars beginners. Very good for all the Boba Fett fans out there.

Published by Thriftbooks.com User , 22 years ago
I think this book is awsome!!!!!! Please leave a relationship in the series of Jaina and Zekk!!!!!! The series is the best!!!!!

Each book in this series is the best!

Published by Thriftbooks.com User , 22 years ago
Dear Readers, These books are absolutely Star Wars. Every book in the "Young Jedi Knights" series is a page turner, and they always leave you hungry for more. If want "Star Wars" read these books and you'll have it! P.S. (My definition of "Star Wars" is: The Greatest!)
Copyright © 2022 Thriftbooks.com Terms of Use | Privacy Policy | Do Not Sell My Personal Information | Accessibility Statement
ThriftBooks® and the ThriftBooks® logo are registered trademarks of Thrift Books Global, LLC