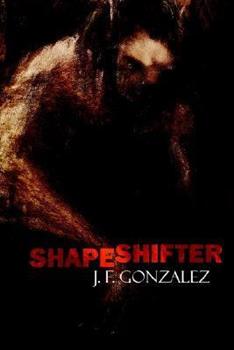 Mark Wiseman is a werewolf who has been struggling to keep his curse under control for years. It almost works until his boss discovers his secret and forces Mark to use his curse to kill for him. This description may be from another edition of this product.

Published by Thriftbooks.com User , 13 years ago
I loved this book. It has everything that a good horror novel should have, and I devoured it in only a couple of sittings. J.F. Gonzalez is one of the most talented horror authors out there at this time, and for me this book only cemented that belief in my mind even more. Typically in a horror novel the werewolf is the evil monster that must be defeated, but not in Shapeshifter. Mark Wiseman is normal guy who unfortunately turns into a werewolf during the full moon. The monster of the story is his boss, Bernard, who uses Mark's curse for his own personal gain. The characterization is wonderful. Gonzalez has created believable characters who readers can sympathize with, going through their fear, desperation and romance all within the pages. I loved it, and I can't wait to read something else by J.F. Gonzalez.

Published by Thriftbooks.com User , 14 years ago
I'm a sucker for a good old fashioned werewolf story, and this one from J. F. Gonzalez satisfies. It's fun, fast-paced and wonderuflly vicious. Grab this one and kick back for a really good fang and claw story.

It's not easy being furry

Published by Thriftbooks.com User , 14 years ago
It's not always easy playing second fiddle. Art Garfunkel may be a talented singer, but he will always be in the shadow of Paul Simon. And who listens to Messina if Loggins isn't around? In the world of horror, it's the werewolf never seems to get the respect of the vampire; for every werewolf movie, there are several vampire flicks and I would have to guess the ratio is even worse in books. After all, with the many horror novels I've read, there have very few that feature lycanthropes. In fact, Shapeshifter by J.F. Gonzalez may be the first. The werewolf in Shapeshifter is Mark Wiseman, a college student who does swing-shift office work at an insurance company. Wiseman doesn't know why he's a werewolf, but every full moon he changes into a man-beast with violent, carnivorous urges. Although he has not always been lucky in avoiding killing people, he's been able to avoid capture and more-or-less control his changes. Unfortunately, one of his transformations has been witnessed by the insurance company's CEO, Bernard Roberts. Wiseman may be the werewolf, but Roberts is the monster. The company is about to go through a merger, one that Roberts really doesn't want to happen. Cleverly, he finds out all about Wiseman and coerces the clerk into killing for hire. In particular, Roberts wants to kill certain board members who favor the merger. Wiseman is trapped into doing the crimes, realizing that he will be arrested or killed if he doesn't, with Roberts getting off completely. For the executive, it seems the perfect crime, but the coincidence of several people dying by supposed animal attacks will raise a few questions. Having never read Gonzalez before and with little experience with werewolf novels, I wasn't sure what to expect (maybe there was a good reason that these novels were uncommon). What I got was an entertaining, fast-moving book. This is more the result of the writing than the topic; Gonzalez is good at what he does. If you've never read him, this book should be a fun treat.

Published by Thriftbooks.com User , 14 years ago
Lycanthropic Orange Coast College student Mark Wiseman controls his urge to kill when he shifts to a werewolf; he also hides his condition from everyone until he is caught changing by a security camera while working in the Tape Library of the Computer Operations of Free State Insurance. The firm's CEO Bernard Roberts lives for his work though he makes time even at his executive office for sex with his executive secretary Carol Emrich. He owns the videotape in which Mark is filmed shifting. The wealthy amoral mogul blackmails Mark into cooperating with his desires. He orders Mark to kill any board member supporting a merger that if agreed will lead to an audit and ultimately expose Bernard's embezzling of company funds. To further insure Mark cooperates, Bernard has evidence that links Mark to the bloody murders of the werewolf's parents. Mark's only hope for freedom resides with Carol whom he just met and can sense her attraction to him. This is an entertaining fast-paced horror thriller in which readers initially will wonder whether the wolf will do the killings or not and whether Mark will ever be free from the malevolent Bernard. J.F. Gonzalez keeps the audience wondering how Mark will expedite himself from this mess once he decides not to kill Bernard at least for now. Though neither of the male leads showcases much in the way of any redeeming qualities as a survival of the fittest killer instincts rules; fans of in your face werewolf tales with plenty of gore will want to read this exciting story. Harriet Klausner
Trustpilot
Copyright © 2022 Thriftbooks.com Terms of Use | Privacy Policy | Do Not Sell My Personal Information | Accessibility Statement
ThriftBooks® and the ThriftBooks® logo are registered trademarks of Thrift Books Global, LLC