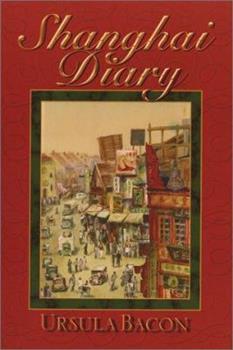 By the late 1930s, Europe sat on the brink of a world war. As the holocaust approached, many Jewish families in Germany fled to one of the only open port available to them: Shanghai. Once called the... This description may be from another edition of this product.

Published by Thriftbooks.com User , 16 years ago
Several months ago I saw the author, Ursula Bacon, on BookTv (C-Span 2). I was very impressed with her; her lecture was excellent; and the true story of her life from the age of 10 to 18 was compelling. So, I immediately ordered her book. But the book sat on my desk for weeks making me feel guilty about not reading it. I too am a writer. So, finally after completing one book and revising another one, I took a break. And what a break that was--when I was transported to the CHINA of 1938-1946! Ms. Bacon, an only child of a Jewish family, left Germany with her parents as Hitler and his cohorts were rounding up Jews and transporting them to Death Camps. By the time Vati, Dad, and Mutti, Mom, were looking for countries to immigrate to, every country had closed its doors to German Jews except Shanghai, China. And Shanghai was a total mess, worse than anything most Americans would ever see. But Ursula's family lived in the filthy disease-ridden slums and survived by bartering their few possessions for food. Ursula, up until then a very sheltered child, attended a Catholic school where most classes were taught in French. And most of the time she remained optimistic, made many European and Chinese friends of all ages, learned to speak Mandarin Chinese, encouraged her Mutti, and helped Vati with his business endeavors. Ursula became an adult before becoming a teen! And she encountered many bizarre situations which she handled better than most adults. The worst was when she was 12 or 13 and killed a drunken Japanese soldier with her bare hands when he attacked her as she walked home from a friend's house late at night. She didn't tell her parents, though, because she didn't want to burden them with additional worries. This intriguing and inspiring survival tale is about Jewish refuges in China during WW II, though it depicts the color of Shanghai and the many nationalities struggling to survive their wartorn world. I didn't want SHANGHAI DIARY to end! However, I couldn't wait to finish it, so I could pass it on to an friend whose daughter adopted the most delightful Chinese girl who I predict will someday be an important leader in some capacity. The world has grown so small today that every American should go out of his or her way to become acquainted with other cultures and religions. And every American teenager should be given the opportunity to live in a foreign country to learn new languages and cultures. I give this wonderful book MORE than FIVE STARS! And I hope parents will share it with their teens and high school teachers will use it in their classes. Thanks, Ursula! K.J. McWilliams, book reviewer as well as author of Pirates, The Journal of Leroy Jeremiah Jones, a Fugitive Slave, The Diary of a Slave Girl, Ruby Jo, and The Journal of Darien Dexter Duff, an Emancipated Slave, winner of the Young Adult Fiction 2003 Royal Palm Literary Award.

Published by Thriftbooks.com User , 17 years ago
"If you can't change it, don't complain." Life is not about events, but it is about people. Life was truly a challenge. To escape Hitler the author and her family escaped to Shanghai, China. She learned to live one day at a time. She had a spirit of dreaming of America. America was a beacon of hope for her during this trying time. After the war she and her parents came to America after a two year struggle to get a visa and they located in Denver. The author grew up in China as an escapee from Hitler's Germany. In China she learned to be grateful for everything. She had escaped to China as a child of ten. There with her parents she lived with 20,000 other refugees in horrific conditions. But she and her parents survived. The story is told with wonderful courage, sensitivity and even some humor. The author has learned not to hate but to love people, inspite of the hell she suffered caused by Nazi Germany. According to the author the most important emotions to have are love and gratitude. She lives her life with love of people and gratitude for all persons who have helped her during those difficult years. For those who are interested, there is an author event available on C-Span2 Book TV for this book.

Published by Thriftbooks.com User , 17 years ago
While many would choose wallow in the dispair of loss of family and home at the hand of the Nazis, Ursula Bacon tells her fascinating and terrifying story with grace and optimism. As a child of 10 she escapes with her parents to Shanghai after all other countries closed their doors to European Jews trying to escape the horrors of WWII. There, they joined 20,000 other refugees and lived in horrific conditions. But they survived. Told with humor and sensitivity, this story is inspirational.

Inspiration, History, and a Study in Contrasts

Published by Thriftbooks.com User , 20 years ago
Wow! I was in tears by the second page. I ordered takeout and left dishes in the sink just so I could keep reading this compelling glimpse into a lesser known aspect of World War II. I'm not a history buff, but Ursula Bacon's story drew a sketch of the war at such a personal level that I couldn't stop reading. The book covers the eight year period during which an aristocratic Jewish family fled Nazi occupied Germany to Japanese occupied Shanghai, only to be trapped in a detention center when Japan joined the German Axis.Lest you think the subject might be depressing, let me assure you that it is quite the opposite. The courage, enthusiasm, and even humor that this family mustered to deal with their adversity is inspirational. I especially enjoyed how the author shared the spiritual insights she gained during this period. She blended her Jewish background with Catholic schooling, enhanced by teachings from a Buddhist monk and her own intuition. The result is that she could feel compassion for those who would victimize her. That's a lesson most of us can't achieve in a whole lifetime of petty annoyances. Yet, this young girl managed to love the enemy that treated her as a "sub-human" and "lowest form of life," to use her own terms.I think this book would appeal to a wide variety of people at any age. Some of the images portrayed will stay with me forever- the bombings, the squalor, the beauty. The author's style vacillates between conversational and lyrical. The way she dealt successfully with the contrast between her former life of unimaginable opulence and then her ordeal with abject adversity was stunning. I already find myself taking guidance from her Buddhist teacher Yuan Lin who always reminded her, "Remember, it's all the same."

Shanghai Diary, the little-known story of the Shanghai Jews

Published by Thriftbooks.com User , 20 years ago
When I started Shanghai Diary, I found that I simply couldn't put it down. I hadn't known the story of the Shanghai Jews in the Hongkew ghetto, and I was riveted by the well-written story of Ursula Bacon's 8 years as a young girl in Shanghai, where it was nothing to see a dead baby girl thrown on a heap of trash and where day-to-day existence was harsh and often degrading. Despite all of this, Ursula's family managed to maintain their dignity and prevail. To me it was a story of great courage. When she left Shanghai at the end of the war, far from being devastated by the experience, Ursula took away the lesson that she had seen first hand what hate can do, and she would never hate anyone as long as she lived. The book was so moving that I had to sit quietly and reflect for quite some time after I read the final page.
Trustpilot
Copyright © 2022 Thriftbooks.com Terms of Use | Privacy Policy | Do Not Sell My Personal Information | Accessibility Statement
ThriftBooks® and the ThriftBooks® logo are registered trademarks of Thrift Books Global, LLC