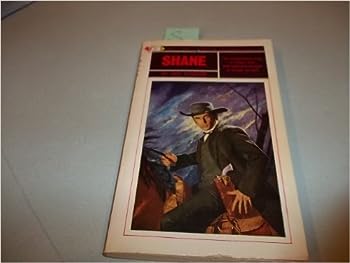 This description may be from another edition of this product. I had lain in my bed thinking of our visitor out in the bunk in the barn. It scarce seemed possible that he was the same man I had first seen, stern and chilling in his dark solitude, riding up our...

Published by Jack , 1 month ago
I bought the book it said it was acceptable it so much writing and underlined so bad i can not read

Published by Thriftbooks.com User , 12 years ago
Jack Schaefer has set his story at the time of Wyoming's Johnson County "wars" between cattlemen and anyone, like rustlers and homesteaders, who cut into their profits. First published in 1949, the novel also reflects something of the war that had just ended for Americans who fought in Europe and the Pacific. We have a young family struggling to put down roots on the frontier, wanting little more than an ordered life and the opportunity to make a living among a gathering of neighbors who want the same for their own families. But they are prevented by men who want the open range for themselves and their own economic interests, and they'll stop at nothing to get their way. While the father of the family attempts bravely to hold his own, his neighbors are intimidated, feeling threatened and outnumbered. Shane, a man with a shadowy past, arrives in the middle of this conflict, and while he assumes for a time the life of a hired hand, his gunslinger services are eventually needed to defend the lives and property of the family that has given him a home. We see what we have suspected, that he is a killer, and there's no place for him in their sunny, settled world. He must go back on the trail and disappear. Given the time in which it was written, "Shane" is a commentary on the role of violence in a world where law and order, on an international level, had been in short supply. Americans - and especially returning soldiers - had seen this for themselves. The novel carries this disturbing awareness right into the daily life of home and hometown. The mystery of Shane's identity suggests that what he represents in the story is a darker side of ourselves that does not integrate well with the more honorable aspects of self we prefer to acknowledge. The simplicity of Schaefer's tale, and his choice of a boy as narrator, allow readers to fill in a lot of details and emotions that tap into their own deeper fears and desires. The two men joining forces to uproot the tree stump is like a scene from a dream that wants to be understood - it's not just about a tree stump. But what? While the film for all its widescreen glory is not without merit, it's dated in a way the book may never be. In its 250+ pages, it speaks of elemental forces and how we go about living in a world where we are threatened by circumstances beyond our control. Thanks to the University of Nebraska Press for assembling this critical edition which includes several fine essays providing historical background, analysis of the text, commentary and reviews on the film adaptation.

Published by Thriftbooks.com User , 13 years ago
Today's thriller writers could take a lesson from Jack Schaeffer. Just like the title character, this novel is lean and quick and frightening. I mostly bought the critical edition for its cover. Having read the extra material, Shane's historical, literary and cinematic context and a nifty talk with the author, I'm glad I did!

Published by Thriftbooks.com User , 16 years ago
The critical edition of Shane contains the novel, which is good, and severl reveiws, which is so-so. The novel is fascinating to read, and it varies significantly from the movie screenplay. The interview statements by the author, Shaefer, and the reviews are of modest value. There are four or five interesting ideas, such as: westerns like Shane may reflect American foreign policy in the 50's and 60's, the western heroes like Shane are Christ (with six-gun) figures, sort of old testament-new testament hybrids, the author could not write such an innocent story again, because of his cynicism about what the "homesteaders" eventually did to America (his politics are unclear and he seems to blame Babbitt and not the oil barons), the novel first person is an older son looking back at his childhood with Shane instead of the movie's first person protagonist being the young boy, and, the other really good western is The Gunfighter. The obvious oedipal projection, which no reviewer but me has noted, is vivid in the film and only hinted at in the novel. It is too bad for those of us who have seen the movie first; we can only compare, and can't see the novel's images free of Alan Ladd and Jack Palance. The movie could have been better (maybe with Randloph Scott after intenstive acting lessons, or Palance instead of Ladd) since Shane was written as a super-humanly lethal and fearsome man. But, Ladd gives the right voice to the character, and with the special effects the movie works. Shane is "pure" western myth. (It was always a myth, there never were any such characters in the west except in 19th century newspapers and tabloids.) There are only white Nothern European Christian men and few wives and kids; no Mexicans, no African-Americans, no Native Americans, no dance hall girls, not even any cripples. But the novel and the movie try to answer the essential question raised in every good western: what price will you will pay for the most expensive of American luxuries: fairness, justice and honor. If you are fascinated by the film Shane, as I am, the critical edition of the novel is worth taking a look at.

Published by Thriftbooks.com User , 18 years ago
Three reasons this Critical Edition is superior to the usual trade paperback edition. First, there are dozen of good essays written by book and film critics included within the pages. Second, this edition is true to the original, in the sense that it wasn't edited, and was printed in the original layout format. And finally, the artwork on the front book cover is supreme, it's a very good portrait of Shane; a rugged and mysterious man, not one of those cheesy cowboys as presented on the other editions.

One of the best Westerns ever

Published by Thriftbooks.com User , 20 years ago
Folks, I'm James Drury, who you might remember as television's THE VIRGINIAN, and once in a while I read a book that just has to be read over and over and over. Shane was such a book. The fact that there could be any rating in this section other than a 5 simply astounds me. People keep talking about this stump in the book like the book was about the stump. If you think the book was "about a stump" you are too young to be reading beyond grade school level. Jack Schaefer had a hugely powerful grasp of the West and of Western characters, and he left us a legacy with this book that can never be topped. That's coming from a man who reads Kirby Jonas's novels on audio tape. I enjoy Kirby Jonas's books to no end, and I know of no better author, but Jack Schaefer's "SHANE" is a book for anyone to strive to match. It is an all-time classic that I would put hand in hand with Kirby Jonas's DEATH OF AN EAGLE. It's a shame anyone ever has to feel like they're "forced" to read such a tremendous book as Shane.
Copyright © 2020 Thriftbooks.com Terms of Use | Privacy Policy | Do Not Sell My Personal Information | Accessibility Statement
ThriftBooks® and the ThriftBooks® logo are registered trademarks of Thrift Books Global, LLC