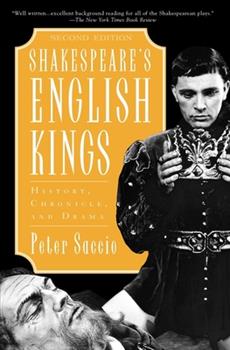 Far more than any professional historian, Shakespeare is responsible for whatever notions most of us possess about English medieval history. Anyone who appreciates the dramatic action of Shakespeare's history plays but is confused by much of the historical detail will welcome this guide to the Richards, Edwards, Henrys, Warwicks and Norfolks who ruled and fought across Shakespeare's page and stage. Not only theater-goers and students, but today's...

Not a bad book at all.

Published by Thriftbooks.com User , 13 years ago
This book proved to be a very helpful resource in making sense of both Shakespeare's historical context and the somewhat cloudy issue of the War of the Roses. I know longer will have to ask myself just who all those Edwards and Richards were anyway. Excellent book even if it was somewhat brief. I will look for more works by this author in the future.

The best guide to Shakespeare's royalty

Published by Thriftbooks.com User , 15 years ago
One of the foremost experts on Shakespeare, Peter Saccio, has written a fantastic book on the history and intricacies of relationships between royal families in the works of Shakespeare. I reiterate the same positive things said by other reviewers...an essential book, by a brilliant man, for anyone serious about getting to know Shakespeare's kings much better.

Published by Thriftbooks.com User , 18 years ago
Peter Saccio's Shakespeare's English Kings is a concise, balanced review of the history behind the kings referred to in Shakespeare's Canon. Each of the kings (plus other important figures) receives coverage so that the reader has a good understanding for the background for each of the 10 history plays. Shakespeare had limited historical references (mostly Holinshed), and he was biased at times by the need to curry to Tutor propaganda (especially in Richard III). Saccio explains this with good research, ably explained. Serious students would benefit from reading this book, as would the casual theater buff. A good book.

Published by Thriftbooks.com User , 20 years ago
I think I would have enjoyed this book more had I not read Norwich's book on Shakespeare's kings before I read this one. Norwich did a much better job of going through the history and, in particular, of comparing the history to Shakespeare's plays. Plus, Norwich's writing was much more vivid and engaging.On the other hand, Saccio does a very good job of going through the history of Shakespeare's kings in a logical manner. He does not waste words and presents a story that is quick and easy to digest. Like Norwich, Saccio focuses mainly on the kings from Richard II through Henrys IV, V, and VI to Richard III. Unlike Norwich, however, Saccio also discusses King John and Henry VIII.For anyone who is interested in knowing what really went on in the lives of these Shakespearean kings, this book is an excellent tool. Saccio points out some of the most important fallacies in the plays and is fair in presenting honest assessments of the realities of these characters even when they conflict with the dynamic images drawn by the Bard. This second edition also has a nice afterward that comments on some of the Shakespearean scholarship of the past 25 years. It is a worthwhile read.

Published by Thriftbooks.com User , 21 years ago
Shakespeare, more than any professional historian, is responsible for the way we think about the English Plantagenet kings. As Peter Saccio argues, "It is he who has etched upon the common memory the graceful fecklessness of Richard II, the exuberant heroism of Henry V, the dazzling villainy of Richard III."We recognize that Shakespeare created plays for entertainment, not tutorials for history lessons. But somehow Shakespeare's English kings seem so authentic, so much more real than the kings of history texts. And recent historical research and reinterpretation now indicates that Shakespeare's characterizations indeed appear more accurate than we had previously realized. Saccio states, "Shakespeare knew how his late medieval characters looked at things."Dr. Saccio (Dartmouth College) has created a delightful book that explores how Shakespeare's imagination and actual history are tightly intertwined. He examines history as understood at the time of Shakespeare, as we understand English history today, and how Shakespeare knowingly revised history for dramatic impact.Saccio's style is very engaging. This book is not only a guide to more fully appreciating Shakespeare's plays, but it is also an enjoyable look at English history. I highly recommend this book for all readers - those new to Shakespeare's histories and those quite familiar with Shakespeare's English kings.I previously reviewed Desmond Seward's "The Hundred Years War, the English in France, 1337-1453" and suggested that it would serve as a useful background for understanding Henry V. I still recommend reading Seward's book and I still believe that a four star rating is appropriate. I only wish now that I could give Saccio's "Shakespeare's English Kings" more than five stars. I cannot recommend it too highly.
Trustpilot
Copyright © 2022 Thriftbooks.com Terms of Use | Privacy Policy | Do Not Sell or Share My Personal Information | Accessibility Statement
ThriftBooks® and the ThriftBooks® logo are registered trademarks of Thrift Books Global, LLC