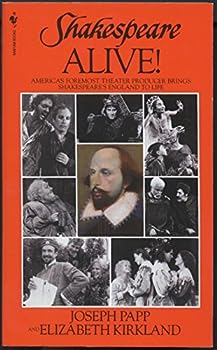 by Elizabeth Kirkland and Joseph Papp

From Joseph Papp, American's foremost theater producer, and writer Elizabeth Kirkland: a captivating tour through the world of William Shakespeare. Discover the London of Shakespeare's time, a... This description may be from another edition of this product.

Published by Thriftbooks.com User , 14 years ago
As an educator, I've found this helpful, lively little book is quite a bang for your buck when you need the history to engage your students. What you get is a rich range of key facts plus trivia that will grab your students' interests -- a perfect amount of information to help you prep mini-lessons before you lead students in a scene of Shakespeare. If you need to teach a Shakespeare unit, I recommend using this, the Folger Library's Shakespeare Set Free series, and the National Council of Teachers of English publications on Hamlet and Romeo and Juliet (in particular, consider Teaching Romeo and Juliet: A Differentiated Approach). In addition, an English teacher should buy a personal copy of the Oxford School editions of Shakespeare's plays -- perfect notes to supplement in the same vein as Shakespeare Alive.

This is the COOLEST book ever!!!!

Published by Thriftbooks.com User , 16 years ago
I know the person who wrote the book and it is the bestest thing i have ever read! This provides useful information for beginning Shakespeare scholars. Buy this book! it's awesome and I love it!!! I have like 10 copies of this book cuz I love it so much! I studied Shakespeare and this helped me understand what was happening when I read the parts of the book! Anyone who says this book is bad needs to read it again cuz it isn't bad. It's amazing! READ IT!

Published by Thriftbooks.com User , 21 years ago
Shakespeare Alive makes a good introduction to Shakespeare not just for high schoolers, but for anyone who's new to Shakespeare. The book is well-written, being both informative and a pleasure to read. Its relatively light tone is not intimidating to the novice, and the authors don't assume knowledge that a newcomer might not have. The book is conveniently divided into sections. After a prologue which does a good job of getting the reader to imagine Elizabethan England, we have a section on Elizabethan English life and then a section on Shakespearean theater. The Elizabethan history section provides a lot of general information spiced with intriguing details on everything from how children greeted their parents to the standards of beauty and the status of foreigners. The theater section starts in pre-Shakespeare English theater and ends in today's theater. In between is covered everything from who was in Shakespeare's audience (nearly everybody) and why (for one thing, it was the second cheapest form of entertainment available) to that student bugaboo, Shakespearean language. This section of the book no doubt benefits greatly from having its authors be connected with the theater.A few people might object to the authors' use of imagination (for example, in showing how Shakespeare used and changed his sources, the authors invite us to imagine a Shakespeare who is leafing through a book for inspiration and dismayed by some of what he finds), but I can recall no instance of such imaginings not being clearly marked as such. Besides which, it would take a real stick-in-the-mud or a fiery anti-fantasist to be offended by the invitation to imagine Shakespeare joyfully tossing his quill in the air. Another possible objection, that it is not thorough enough, is silly, as the book is not intended to be exhaustive. Shakespeare Alive is a worthwhile book, either for someone who wants a starting point for further study of Elizabethan life and literature or for one who just wants a taste of the background to Shakespeare's plays. As an introduction, I would recommend it even above Norrie Epstein's The Friendly Shakespeare. Shakespeare Alive has more information about the time period than The Friendly Shakespeare does (while the works can be enjoyed without historical knowledge, they'll be appreciated more with than without). Also, Shakespeare Alive has a more coherent whole than The Friendly Shakespeare, which is designed for dipping into rather than reading straight through. I believe the smoother reading and the difference in focus make Shakespeare Alive the better introduction for most people. Buy this book for yourself or for the student in the family.

Published by Thriftbooks.com User , 21 years ago
"Shakespeare Alive!" is an intriguing and enjoyable visit to Shakespeare's London. Joseph Papp, founder and producer of the prestigious New York Shakespeare Festival, and Elizabeth Kirkland, a Rhodes Scholar at Oxford, created not a scholarly tome, but a delightful and often humorous examination of Elizabethan culture and its impact on Shakespeare.Other reviewers exclaim how their high school students related to "Shakespeare Alive!'. I only wish I had encountered this little book during my school years. Hat's off to Papp and Kirkland for an excellent introduction to Shakespeare's England.A prologue casts the reader into 16th century England as a young lad wrestling with a decision to leave his familiar rural setting in search of better opportunities. Daily rural life is a struggle, food is scare, a recession makes things worse, and you have little hope. London is far away and frightening, but you have no other choice. You begin your long trek on foot.It is an uncertain world. England is in change, emerging from an inward looking isolation, to one in which the world's boundaries seem to expand with the return of each ship from the New World. The Renaissance moved from Italy to England at an almost imperceptible pace, but it did arrive, and nothing remains the same. "Shakespeare Alive!" explores how the English theater emerged within this cauldron of change. In 1576 James Burbage builds the first structure dedicated to housing plays and calls it the "Theater", the first time this word was used to denote a building. Within just a few years Burbage has competition - the Curtain, the Swan, the Rose, the Fortune, and Shakespeare's Globe - and all were presenting daily comedies, tragedies, histories, and romances.In an engaging, amusing style Papp and Kirkland provide a broad understanding of Shakespeare's world, his language, his sources, his creativity. I thoroughly enjoyed (and found most useful) their sections on Shakespeare's vocabulary, his creative use of rhetoric, and his near obsession with puns. "Shakespeare Alive!" is a uniquely fascinating book.

Published by Thriftbooks.com User , 23 years ago
I teach a Shakespeare class to 11th and 12th grade high school students. The class is an elective, no one is required to take it, but it is consistently maxed out (I have 34 students next semester). One of the reasons for this is the format of the class which always begins with readings from "Shakespeare Alive!". The kids enjoy this book because it speaks directly to them as teenagers. The students have a sense of transporting themselves back in time. I highly recommend this book as a classroom set for teachers who teach Shakespeare classes or even a unit on Shakespeare; it really does bring Shakespeare Alive!
Trustpilot
Copyright © 2022 Thriftbooks.com Terms of Use | Privacy Policy | Do Not Sell My Personal Information | Accessibility Statement
ThriftBooks® and the ThriftBooks® logo are registered trademarks of Thrift Books Global, LLC