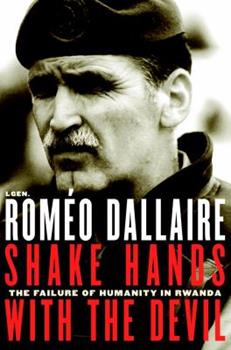 Shake Hands with the Devil: The Failure of Humanity in Rwanda

For the first time in the United States comes the tragic and profoundly important story of the legendary Canadian general who watched as the devil took control of paradise on earth and fed on the... This description may be from another edition of this product.

Published by Thriftbooks.com User , 13 years ago
reach on time in good condition. No comment on the story !! A lire !

When The Devil Ruled The World For One Hundred Days

Published by Thriftbooks.com User , 17 years ago
The terrible truth about General Dellaire's book, "Shake Hands With The Devil" is that it is so well written it takes its place among the literary classics devoted to history such as Julius Caesar's Memoirs and Gibbon's Decline And Fall Of The Roman Empire. The General shows a profound awareness of literary tradition and wields it ruthelessly to expose the ruin at the heart of global humanity and how it lead to the brutal rapes, mutilations and murders of almost a million human beings in the country of Rwanda. Corpses are piled everywhere and they fill the rivers and lakes of the country. The odor of death - perhaps the most diabolic odor in the world - is so strong and intense that the General feels it is impossible to physically move. The body of a boy trembles and the General trys to assist the lad but the body crumbles to pieces filled with worms and insects that had caused the flesh to quiver. But there is something truly disquieting beneathe all of the evils and dark strategems described by the General. His book is essentially a work of atonement - but it goes furthur. He contaminates us all with his atonement because almost all of us (myself especially) are guilty of the genocide. We did absolutely nothing while the political and economic alliances that seek to dominate our world handed the people of Rwanda over to unnatural horrors. Those of us of rational age are guilty. We must all follow in General Dellaires on-going work of expiation.

Genocide is SYMPTOM--Lack of Public Intelligence is CAUSE

Published by Thriftbooks.com User , 18 years ago
I read this book with the eye and mind of a professional intelligence officer long frustrated with the myopia of national policy constituencies, and the stupidity of the United Nations Headquarters culture. General Dallaire has written a superb book on the reality of massive genocide in the Burundi and Rwanda region in 1994, and his sub-title, "The Failure of Humanity in Rwanda" is where most people end up in reading this book. I see things a little differently. I see this book as a massive indictment of the United Nations culture of "go along gently", as a compelling documentary of how ignorant the United Nations is about impending disasters because of its persistent refusal to establish a UN intelligence secretariat as recommended by the Brahimi Report, and as a case study in how the Western nations have failed to establish coherent global strategies--and the intelligence-policy dialogues necessary to keep such strategies updated and relevant. According to the author, 15 UN peacekeepers died--over 800,000 Rwandans died. The number 15 is not larger because Belgium, Canada, and the US explicitly stated that Rwanda was "irrelevant" in any sense of the word, and not worth the death of a single additional Western (mostly white) soldier. Although there has been slight improvement in the UN since LtGen Patrick Cammaert, NL RM became the Military Advisor to the Secretary General (see General Cammaert and other views in Peacekeeping Intelligence: Emerging Concepts for the Future, the reality is that the UN is still unintelligent and unable to muster the strategic intelligence necessary to get the mandate right; the operational intelligence necessary to get the force structure right; and the tactical intelligence necessary to achieve the mission on the ground. Just about everything General Dallaire writes about in this book with respect to UN culture and UN lack of intelligence remains valid today: they still cannot get decent maps with which to plan a campaign or execute the mission; UN administrators are still anal-retentive bureaucrats that will not issue paper and pencils, much less soft drinks for diplomatic encounters; UN "seniors" still like the first class lifestyle on the road (they pretend to be austere only in NY); UN civilian mission leaders still misrepresent military reporting, as Booh-Booh did to Dallaire; and the UN is still ineffective in creating public intelligence with which to communicate directly to national publics the reasons why humanitarian operations must take place early and in force. General Dallaire concludes his excruciatingly detailed book, a book with enormous credibility stemming from the meticulous manner in which he documents what happened, when it happened, and what everyone knew when (including advance warning of the genocide from the "third force" that the UN leadership refused to take seriously), with two thoughts, one running throughout the book, the second in the conclusion only: First, and perhaps beca

The most powerful book I've ever read

Published by Thriftbooks.com User , 18 years ago
I bought this book a few days after it was released and read it within a week. It is an extremely compelling account of a horrific event from one of the few people who tried to stop it. He looked at dead or orphaned children in Rwanda and saw his own young children. He exhorted the UN and the powerful nations of the world to send him a few thousand troops, so that he could save hundreds of thousands of innocent lives. In the end, political calculus was more important to those nations than the lives of almost a million Africans. This book really changed the way I look at the world. Another really good book for exploring the role of politics in refusing to prevent genocide is "A Problem from Hell" by Samantha Powers.

Excellent book on the tragic genocide

Published by Thriftbooks.com User , 19 years ago
A book I could hardly put down as I read the story from Dallaire's view point. A tragic story of the failure of the world powers to act. A good insight in how the UN and its members function. This tragedy's lessons are applicable to today's politics and world strife. In the end many generations either killed or physically and emotionally damaged forever. I fully understand the emotional impact on Romeo Dallaire's. What can we do now ?
Trustpilot
Copyright © 2022 Thriftbooks.com Terms of Use | Privacy Policy | Do Not Sell My Personal Information | Cookie Preferences | Accessibility Statement
ThriftBooks® and the ThriftBooks® logo are registered trademarks of Thrift Books Global, LLC