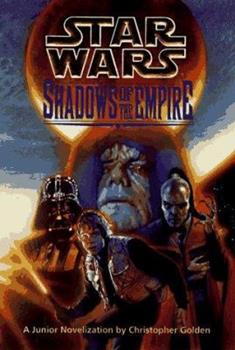 Shadows of the Empire (Star Wars)

All the fun of the adult book, but for younger readers!

Published by Thriftbooks.com User , 13 years ago
If you are a younger reader who had trouble reading the adult version of Shadows of the Empire(I know I used to!), or a kid who wants to read a great story about Star Wars, this is the book for you. It captures all the fun and excitement of the adult book, but it is easier to read and is shorter. 9Not to mention is says how to pronounce Xizor! In my opinion, this is a great buy!

Great book kinda sad and funny at the same time

Published by Thriftbooks.com User , 23 years ago
I really love the book. Steve Perry did a good job with the plot. I think having Dash Rendar gave it some humor. Even though the Emperor is on the cover he has basicly no point. I like that it mentions Boba Fett a lot. I liked the part when Dash Rendar said "Okay Goldie. My name is Man With a Blaster About to Cook You." Xizor was a good character to add. He made the plot more complex.

The attempt to rescue Han Solo from Boba Fett.

Published by Thriftbooks.com User , 23 years ago
Dash Rendar is supposed to protect Luke from the Bounty Hunters. It is a fast moving story. The story begins at the Battle of Hoth, then progresses to the planet Tatoine to save Luke from Swoops. Next you go to the sewers to get into Xizor's (she-zor) palace to rescue Leia. The Rebels blow up Xizor's skyhook and Dash crashes with a fiery death into the wreckage.

it was a good book

Published by Thriftbooks.com User , 24 years ago
GOOD BOO
Copyright © 2020 Thriftbooks.com Terms of Use | Privacy Policy | Do Not Sell My Personal Information | Accessibility Statement
ThriftBooks® and the ThriftBooks® logo are registered trademarks of Thrift Books Global, LLC