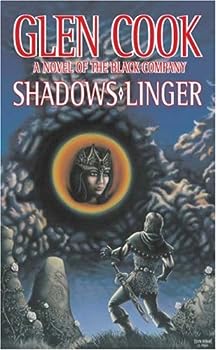 This description may be from another edition of this product. Mercenary soldiers in the service of the Lady, the Black Company stands against the rebels of the White Rose. They are tough men, proud of honoring their contracts. The Lady is evil, but so, too, are...

Published by Thriftbooks.com User , 14 years ago
Wow, after not having read fantasy for years due to endless descriptions of everything and everyone, good and evil, archetypes, heroes and villians, I lucked out when I randomly picked up this book. It's an awesome read. Cook doesn't bother with much explicit description; he leaves it all to show, which he does with an economy of words that keeps focus on the white-hot story. The climax had me leaning out of my seat, which almost never happens these days - sadly - since I've read so many frigging books. With casualties galore I had no pre-conceived notion of the outcome. I also really enjoyed the easy use of names. No apostrophe-ridden tongue twisters. No olde English, German, or nominal languages. No foreign language content at all. Here are the character names: Croaker, Goblin, the Lady, the Dominator, the Limper, Whisper, Soulcatcher, Elmo, the Captain, the Lieutenant, Marron Shed, Asa, Lisa, Darling, Raven. You might say it's unimaginative, true, however the easy names frees the reader to enjoy the plot. I found them quite liberating. As far as descriptions of actions: they were sparse. When damage to people was described it was far more effective. Overall I'll be reading a lot more Glen Cook and actually am kicking myself for not reading more fantasy as he reminded me of how good it can be. I have to comment on one of the reviewers giving it a 1 star. One-star: "Instead we are treated to some guy who double-crosses his wife, some guys who steal urns from an underground cemetary and some mentions of the black company. It took 200 of the 300 pages to even mention the White Rose. After reading the disappointing first book in the series, I was hoping that this one would shed some light on what that first one was lacking. It just confused me more." Eh, the White Rose was mentioned in the first pages as being the Rebel's motive. The Black Company was mentioned at the same time when Croaker and friends were wiping out rebs. No one double-crosses a wife in the entire book, so I have no idea where he got that. Yes there is a guy who steals urns from the underground cemetary (aka 'catacombs') and that guy is one of the main characters named Raven. One-star: "There is absolutely not a single interesting or well-developed character in 'Shadows Linger'. At least the first had Croaker, but even he is cast aside as a second string character. The names flit right past the reader, without anything to hook the reader in. Perhaps the characters themselves are the 'Shadows' that 'Linger'... shadows that would be fortunate to be called one-dimensional." Croaker was the first-person narrator for approximately half the book, and he was well-developed, not second-string. The other principles were Raven, Marron Shed, and Darling. As far as what's needed to hook the reader in, it would be the action involving the characters, their needs and desires and appeal. Cook is very light on physical descriptions, yet it's quite easy to imagine the

A dark tale indeed; still great on the fourth reading.

Published by Thriftbooks.com User , 16 years ago
I'm now on my fourth reading of this series over the course of about 20 years, having first read them in 1985 and then been left in limbo awaiting the release of the Glittering Stone series. Glen Cook did a masterful job of crafting his dark and dangerous world in "The Black Company", and introducing us to that dysfunctional band of somehow sympathetic miscreants, including characters like Croaker, One-Eye, Goblin, Raven, and many others. The author takes it to the next level in "Shadows Linger." Set in the gloomy, ramshackle port city of Juniper, this volume picks up the trail of Raven and his ward, Darling, as they seek to make a new life for themselves apart from the Company and out of the notice of the Lady and her empire. Just as he did in the first book, Cook focuses on the gritty, unsavory aspects of life, and paints a foreboding picture where some of the darkest aspects of human morality and depravity are commonplace. Men like the hapless Marron Shed or the weasely Asa, whose day-to-day survival is precarious at best, care little about morality, or if they care, they suppress their nagging consciences for the sake of staying alive. In his efforts to do good for Darling, Raven unwittingly plays into the plan of the incomparably evil Dominator as he seeks to escape his tomb in the Barrowlands. At the same time, he also draws the attention of the Lady and the Taken to Juniper. Those crack mercenaries, the Black Company, are sent to Juniper to serve as the vanguard of the Lady's forces who are to contain the threat caused by Raven's bumblings. From there the tale becomes one of wicked plot twists, intense action, and powerful wizardry as the Company finds itself caught in a battle between earthshaking otherworldly powers -- and pays a heavy price. I don't want to go into too many details -- don't want to spoil a great book for those who may not have read it yet. Let me encourage you to do just that. I'm still debating which of the first three novels is my favorite -- it may well be this one.

My personal favorite of the whole series

Published by Thriftbooks.com User , 21 years ago
I LOVE the Black Company series. But Shadows Linger is easily my favorite novel in the whole series. Here's why: The Black Company is one of the great creations of modern fantasy. In a genre in which most stories are starkly black and white--really great good guys and really bad villans--the Black Company (contra its name) lives in grey. In a genre in which heroes are all-knowing and all-powerful, the Black Company is filled with fallible, vulnerable humans. Yet, they nevertheless are the baddest outfit around. Remember how we reworked Psalm 23 back in the '60s? "Yea, though I walk through the Valley of the Shadow of Death, I shall fear no evil--for I am the baddest SOB in the valley!" That could be the Black Company motto.One of the things I like best about Cook's novels is that the story line is more important than the individual characters. Yet, in Shadows Linger, my favorite characters take center stage. Croaker leads a Company detachment to the town of Juniper (which itself is a great location that is fully realized.) Raven is in town contributing his unique brand of honor and violence. Eventually they meet in a wild climax.One of the striking things about the Black Company is Cook's notion of honor. The Company's code of ethics is focused almost wholly inwardly. Honor vis-a-vis the outside world consists of keeping one's contracts. Otherwise, honor is focused on one's relationships within the Company. This is both the Company's greatest strength and also its greatest weakness. A critical element of the series is the Company's gradual coming to grips with the nonsustainability of its ethical structure. Shadows Linger is a critical plot point in this line of plot evolution. In it, the Company must decide whether honoring its contract with Lady is worth its collective soul.

A second in the series exceeding the first.

Published by Thriftbooks.com User , 23 years ago
This series is about the charactors, not the setting, or the conflict. Cook has created a cast of dozens, and made them individual enough that you could tell which charactor was doing what, just by when and how. These charactors are as real as one can expect in a fantasy novel. The good guys have their problems and hang-ups. Some of the supposed heros are just out and out unlikable. Some of the villians are compelling, all are interesting, and some are outright repulsive. The story is told as seen by Croaker, the company doctor, in an unflowering honest chronicle of the companies actions in a war they aren't really happy about being a part of. The only complaint I have about this series is the amount of time between new books. If this is a concern then read the first trilogy (The Black Company, Shadows Linger, and The White Rose) which are a complete set unto themselves. The Silver Spike, is a stand alone which occures just after the first three chronologicly. Read them once to enjoy them. Read them a second time to appreciate them.

A gripping tale of the endurance and allure of evil.

Published by Thriftbooks.com User , 24 years ago
This second book of the Black Company series illustrates perfectly the brilliance of Cook's mercenary creation. He crafts an exciting, intense tale of men in conflict with the world, with destiny and with their own natures. All of the characters are involved to greater or lesser degrees with a struggle for power. Many of the characters don't even realize the role they are playing until everything comes together in a grand explosion of conflicting goals and deceits. I believe Raven is one of the most intriguing characters in modern fantasy. A man with a natural tendency towards darkness, he attempts to redeem himself by serving the Light, and ends up falling into an even greater darkness. This is the theme of this entire series. What is Evil? And once you've served Evil, can you ever be free?
Copyright © 2020 Thriftbooks.com Terms of Use | Privacy Policy | Do Not Sell My Personal Information | Accessibility Statement
ThriftBooks® and the ThriftBooks® logo are registered trademarks of Thrift Books Global, LLC