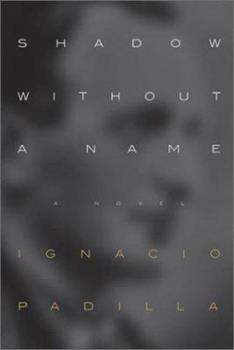 Shadow Without a Name: A Novel

In 1943, General Thadeus Dreyer, a WWI hero who trains doubles for Nazi leaders, disappears. In 1960, Adolf Eichmann, a master chess player, is arrested in Buenos Aires, extradited to Israel, and... This description may be from another edition of this product.

Book of strategy & shadow that provides the reader substance

Published by Thriftbooks.com User , 18 years ago
Like a game of chess where anonymous pawns are sacrificed, pieces swapped and humble pawns can be made queens, where strategy is all, this novel moves players and identities about on a board incomprehensible to the players/narrators but fascinating to the readers. Told in 4 voices that spread from WWI to the early 1960's and the execution of Eichmann in Jerusulaem, we see that names, identities and futures are swapped by games of chess on board a train to the Eastern front of WWI. But soon we find that all these disparate voices are united in the sense of belonging to one giant chess game whose moves they can not control and - even more - in the interconnectedness and yet shadowy strands that connect them all. The Shadow Without A Name is a book that combines intelligence, strategy and suggestiveness to convey the fluidness of personal identity and yet the way we all quest for a sense of who we are,and for a way to understand our role in the world. The Shadow suggested works on many levels - including the way we cast shadows on other's lives, and how those shadows affect us. The different voices are all distinct characters in tone, and yet the use of these voices is quite well done - there is no sense of choppiness to the novel as it progresses forward and through the past. While some of the action takes place during war, this is not a "war book", nor is it simply a mystery concerned with a simple crime. The structure of self and identity and the need to know what happens as a result of these overt and sublte games of chess will keep the reader following the game to the end of the book. If there is any weakness, it is that places are mentioned, but never fully evoked or felt, but this is minor when the people and plot are so compellingly drawn.

It holds your breath until the end

Published by Thriftbooks.com User , 18 years ago
Life is an ongoing, premeditated chess game and those who live life move like pawns on the chessboard. The chess game that took place in a train at the dawn of World War I in Ignacio Padilla's book, Shadow Without A Name, irreparably changed the lives of at least four men whose identities became warped even after death. The novel cleverly evokes the question of identity and selfhood against the historical backdrop of the darkest period of the twentieth century, as men appropriated names of each other, shielded off past memories and adopted new identities in the hope of a changed, better destiny. It was a time in which the truth became shrouded by lies and the lies adopted as truth. Four men contribute to the narrative, which, in an overlapping interval of time, recounted the sequence of events that spanned decades as well as continents following the chess game in 1916, between Viktor Kretzschmar and Thadeus Dreyer.In 1957, in Buenos Aires, Franz Kretzschmar reminisced his father, Viktor Kretzschmar, who faced Thadeus Dreyer on a chessboard for a life-and-death game. The winner would take Kretzschmar's identity as a railway signalman in Salzburg and the loser would head to the Austro-Hungarian eastern front, which promised death. When Franz's father (the true and only Thadeus Dreyer whose name had been appropriated and incarnated throughout the book) won the game, little did he know the exchange of documents would lend him a warped identity though he saw the deadly wager as a promise of immortality. However he despised trains, Franz's father approached the job with unbounded enthusiasm and not the slightest of his despondency betrayed his imposture until he was found guilty of premeditating a train accident near Salzburg. He wasted away in a sanatorium upon release from jail, rendered unable to recognize his son, let alone Franz's revengeful efforts to restore his father's peace of mind.Richard Schley was a seminarist falsely elevated to priesthood who attended to near-death soldiers and gave vespers in 1918. Schley met his childhood friend Jacob Efrussi who changed his name to Thadeus Dreyer, in the time of the pandemonium caused by the Balkans on the Austrian front in 1918. Efrussi (or Dreyer), who had stolen so many names and lived under so many identities, persisted in denying his real name. Another name swap occurred as Efussi agreed to stake his fate on a chess game with Richard Schley, who found Efrussi in the midst of ravages and brought him home from the front.Alikoshka Goliadkin was an orderly of General Thadeus Dreyer during his rise in the Nazi reign. This man was the key to unveil the clandestine relationships between Franz Kretzschmar, Adolf Eichmann and Dreyer. At the time, Dreyer supervised the training of a small legion of impostors (doubles) who would occasionally replace senior party officials or served as decoys in public appearances considered high-risk. Goliadkin was the only man who knew the where about of Dreyer and his imp

Published by Thriftbooks.com User , 18 years ago
I had heard that Ignacio Padilla was one of Mexico's promising young writers. When I purchased his book, I was expecting another book about "The Mexican Condition" or some new take on magic realism. What a pleasant surprise to discover a suspense novel set in Central Europe!Padilla is not your average suspense or mystery writer. He is much smarter. In his ability to combine deep thinking with a simple but elegant style, Padilla reminds me of Borges. Yet he never leaves the shadow world as imagined by Eric Ambler and Alan Furst.Break the swan's neck! No more flying burros! A new and very clever voice is emerging from Mexico City. A voice that complements Mexico's new generation of film makers.

Published by Thriftbooks.com User , 19 years ago
Things, and characters, are not ever what they seem in this excellent novel. The novel has four different narrators, each with a different version of reality. By the time the novel is over, the reader realizes that probably all of them were lying in their narratives for they certainly were all lying as they lived their lives. The novel opens with the story of two men on a train during World War I. One man is headed for the front, the other, for a cushy, safe railroad position. They play chess with high stakes. If the soldier wins, he claims the identity of the railway employee, if he loses, he kills himself. The name of the soldier, Thadeus Dreyer, changes hands several times in the novel. The man who is Dreyer ultimately organizes the Amphitryon Project during World War II, where doubles for high ranking nazis stand in for them at certain public events. The novel is intriguing and labarynth-like, and will have you questioning every word of each narrator in your search for "truth". An excellent read.

Published by Thriftbooks.com User , 19 years ago
As in the chess games which are at the heart of the action here, Padilla's characters move like pawns, often being overtaken by events and supplanted by other men as part of the grand, overall "game" of life. Padilla raises thought-provoking questions about the nature of selfhood here, as men appropriate each other's names, accept or reject the past which is connected with those names, and hope, ultimately, to change their destinies by living someone else's life. The reader must constantly question whether each character is who he says he is, and whether he really is who we think he is. Main character Thadeus Dreyer goes through several incarnations as Padilla connects him to seminal events of the 20th century: the fall of the Austro-Hungarian Empire and World War I, the rise of German Socialism and World War II, and ultimately, the war crimes trial of Adolf Eichmann.Four speakers give four overlapping views of the characters and action. Franz Kretzschmar, the first speaker, is living in Buenos Aires in 1957, as he recalls the history of his father, Viktor Kretzschmar, who lived another man's life after assuming another man's name. On a train going from Austria to the eastern front in 1916, he had played a life-or-death chess game with another man and had "won." The winner became "Viktor Kretzschmar" and lived out the war as pointman on the Salzburg-Munich train line; the loser became Thadeus Dreyer and faced almost certain death in battle.Richard Schley, the second speaker, is a seminarian in 1918, when he sees "Thadeus Dreyer," whom he once knew in Vienna as Jakob Efrussi. Another chess game leads to another identity switch. A third speaker, Alikoska Goliadkin, is an associate of Dreyer during his rise to power in the Nazi era, and he connects Dreyer with Adolf Eichmann and with Kretzschman's son Franz, who may be part of a Nazi project to create look-alikes of powerful Nazi leaders. The fourth speaker, Daniel Sanderson, is an heir of Baron Blok-Cissewsky, who has left coded information in a chess manual in 1989, explaining some of the final projects of the Hitler era. The Baron, not surprisingly, is yet another of seven incarnations of Dreyer, and as Sanderson investigates the trial and execution of Eichmann and his connection to Dreyer, questions arise as to the true identity of the man executed as "Eichmann."Padilla's plotting is obviously complex, but despite constant changes of identity, and twists and revelations throughout, the novel never loses its way-nor will the careful reader. The tight story line maintains its tension, and the author's ingenuity in manipulating characters and historical events provides constant surprises. The novel is very much an intellectual chess match between author and reader, and in this case, both turn out to be winners. Mary Whipple
Trustpilot
Copyright © 2022 Thriftbooks.com Terms of Use | Privacy Policy | Do Not Sell My Personal Information | Accessibility Statement
ThriftBooks® and the ThriftBooks® logo are registered trademarks of Thrift Books Global, LLC