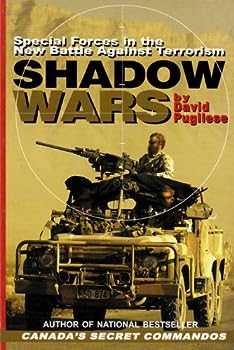 Shadow Wars: Special Forces in the New Battle Against Terrorism

Special forces units around the world have played a critical, though often secretive, role since war was declared on global terrorism following the September 11 attacks on the United States. Now,... This description may be from another edition of this product.

Shadow Wars: Special Forces in the New Battle Against Terrorism

Published by Thriftbooks.com User , 14 years ago
This is one of those books that the so called main stream media journalists in the "green zone" should read before they ever leave the US. At a minimum it would spark them to get away from their peers and pursue stories like those filed by Micheal Yon. These are not the same old "bad news stories from Iraq" as seen on the main-stream "news" channels.

Published by Thriftbooks.com User , 16 years ago
This book is a good read. It does an excellent job of comparing SOFs from several countries, particularly the U.S., Canada, and Australia, including discussing differences in their equipment and operating philosophies. It told me several things about SOF operations in Afghanistan and Iraq that I had not read about elsewhere, and did a better job of describing a couple I knew about than I have read elsewhere.

Concise and timely- Your Situation Report on Special Ops.

Published by Thriftbooks.com User , 17 years ago
David Pugliese gives you the P.D.B. (Presidential Daily Briefing) digest of Special Operations in the recent campaign aginst terror. While the closing chapters are peppered with his political commentary on America's incursion into Iraq, his reporting on operations conducted by the elite forces of the world is a nice, tiddy historical record. The photos are interesting and it is an entertaining read for the history, military and special operations enthusiast. I enjoyed this book and highly recommend it- a fine addition to your military library.

Published by Thriftbooks.com User , 18 years ago
Lots of information on SOF units in Iraq and Afghanistan, this book reads well and is jammed with pretty interesting photos. It includes almost 100 images including never before seen photos of Canada's Joint Task Force 2 (JTF2) in Afghanistan (which for me as a Canadian was worth the price of the book). Also included are pics of JTF2 Hummers and mountain operations,descriptions of their operations as well as Navy SEALs, Grom and a large chapter on the Aussie SAS (who come across really well as no-nonsense professionals.) There is also a good blow by blow account of the Moscow raid against Chechen terrorists in 2002. Up to date and worth the price.
Trustpilot
Copyright © 2022 Thriftbooks.com Terms of Use | Privacy Policy | Do Not Sell My Personal Information | Accessibility Statement
ThriftBooks® and the ThriftBooks® logo are registered trademarks of Thrift Books Global, LLC