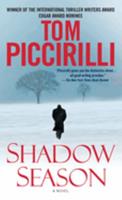 An ex-cop, Finn was left literally blinded by violence. The one thing he can still see is the body of his wife, Dani, and a crime scene that won't fade from his mind's eye. Now a professor, Finn never would have guessed that an isolated girls' prep school could be every bit as dangerous as city streets. Especially when he stumbles upon a local girl lying in a graveyard in the middle of a raging blizzard. Finn may live in a world of total darkness,...

Shadow Season may be a lot of things, but boring it isn't!!!

Published by Thriftbooks.com User , 11 years ago
Shadow Season is a taut, slow-burning thriller that's been written for the pure enjoyment of the reader, and Tom Piccirilli is just the author who can do it and make the whole process look effortless. The lead character in this novel is Finn, a former NYPD officer who discovered that his partner and best friend was on the take with the New York City mob. To make matters worse, the discovery of his partner's crime led to the murder of Finn's wife and to his own attempt at suicide, which leaves the honest cop blind and unable to continue with his career in law enforcement. Finn has now moved on to teaching and works at a private, upstate school for the daughters of extremely wealthy families. This Christmas, when most of the faculty and students have gone home for the holidays, Finn will find himself dealing with a blinding snowstorm (no pun intended)that cuts the school off from the rest of the world. There's no way out and no cell phone service. Through the falling snow are coming two vicious killers who think Finn has cheated them out of drug money. Finn, however, knows nothing about them or why they're so intent on getting to him. Before the ultimate confrontation with our blind school teacher, the two men will enjoy themselves with a little rape and murder of those closest to him, invoking within this soul-searching character a hate-filled rage he hasn't experienced in years. Needless to say, before the snowstorm is over, Finn will have to use his special skills with a knife to save himself and those still alive at the school, and this is something he's actually looking forward to! Tom Piccirilli is always at his best when writing about the lone wolf who has to kill in order to survive against odds no Las Vegas bookie would even think of taking. In fact, I don't think there's another author out there who's capable of creating such stark, vivid, and compelling characters, not to mention the dark ambiance of imminent death and excitement of cut-throat survival that Mr. Piccirilli captures in each of his mesmerizing books. This is an author who cuts his sentences down to the bare bone and then feeds them to the reader, daring him to stop what he's doing even for a desperate bathroom break. Such precision in writing and clear understanding of humanity within his character development is the work of a master craftsman, and that's what Tom Piccirilli is. He's a pro at work, and you don't mess with a pro. Shadow Season is certainly a first-hand example of writing at its best and displays the supreme talent of an author who's destined for great things. Buy it and read it, then get yourself copies of The Cold Spot and The Coldest Mile. You won't be disappointed!

Published by Thriftbooks.com User , 12 years ago
With Shadow Season, Pic has cemented his place in crime fiction. One of the things I enjoy about Pic's work is how deeply he is able to put the reader into the head of the main character, in this case Finn. The one thing that truly sets Finn apart is that, in the portions of the book set after he's lost his sight, he has to imagine what someone looks like, giving them a face from his past as a cop. That is a true testament to Pic's talent, not describing how a character looks, forcing the reader to use Finn's description. Shadow Season is a wonderful book that deserves to be read. Anyone who likes this one should also pick up Cold Spot and Coldest Mile.

Published by Thriftbooks.com User , 12 years ago
Tom Piccirilli's SHADOW SEASON is an atmospheric, brutally violent, enthralling novel that immediately shoots to the top of my favorite crime novels of the year. Finn is an ex-cop blinded in a moment of heartbreak and violence that still haunts him five years after the event. Now Finn is an English professor at a girls' academy in an isolated backwoods town in upstate New York. As a raging blizzard rolls into the area, Finn becomes even further cut off from others and himself. He's never adjusted well to his handicap and still fights against the darkness that seems to be suffocating him. After a minor scandal involving a lovely student, Finn's job is in jeopardy and he's decided to wait out the interim over the winter intercession at the school. With only a skeletal staff and a small group of students on hand (including the seductive girl who claims to love him) Finn tries not to obsess on the fact that his former best friend and partner on the force, Ray, is about to be paroled out of prison after going up for his shady dealings with the mob. Despite being very self-reliant, Finn is propelled not only by his courage but by his fear. He pushes himself harder and harder, refusing help as he wanders the woods around the campus during a storm, testing himself against nature. When he discovers a backwoods townie girl hurt in the snow, the story jumps forward. She tells him that some badass people are after him and will stop at nothing--not even hurting his students--to get revenge on him. Finn is forced to protect his friends and students as the blizzard breaks over them and the deaths mount up in genuinely heartfelt ways. All the while Finn searches through his past via flashbacks in order to discover what evil is visiting the school and why. Finn's blindness is handled in a way I've never experienced in fiction before. Because he was once sighted, every new person that Finn meets has a face taken from someone he once knew while he was still sighted. Students take on the faces & expressions & even the personalities of young women Finn knew in his younger years. Some take on the physical attributes of his parents, his college friends, cops he knew on the force, or even his own face. It's a startling and revelatory storytelling device that really hits home. The action scenes are very fast paced, violent, and realistic. Since the novel is written from Finn's point of view, we don't get to "see" much of what's happening even though we learn exactly what is going on. Piccirilli's dialogue, from the classmates to the cops to the townies, is spot-on and honest. The narrative style is powerful and even spellbinding. His characters are human. No one is entirely good or bad, they are all multi-layered and 100% believable. As dark as the book is, it's also peppered with plenty of black humor used to wonderfully benefit and underscore the action and violence. Piccirilli's plotting, pacing, style, and themes all pack real emotiona

Published by Thriftbooks.com User , 12 years ago
A suspenseful tale of a blind ex-cop turned professor at an all-girl's academy who struggles against his own demons and handicap to save his students when some violent offenders arrive during a snowstorm. Piccirilli is masterful in providing the reader with some sense of what it means to be blind; the hero here isn't a superman who easily conquers his adversity. Instead Finn is resentful, a little bitter, and in genuine pain as he's forced to rely on others more than he'd ever care admit to. He loses his way, physically and figuratively, more than once through the story. He's also distracted by seductive adolescents and his own powerful memories of his dead wife, his former partner, and the terrible event that blinded him and destroyed his life. The novel is written in alternating chapters as Finn in the present struggles to solve the mystery of a strange townie girl who shows up during a blizzard and promises that evil will be visited on the school. Through clever and powerful flashbacks we witness Finn fall in love, begin his career on the force, partner up with his best friend Ray, slowly discover Ray is a dirty cop, and then do everything he can to protect his loved ones when a mob sting goes terribly wrong. Soon the students and staff either go missing or are found dead as Finn does his best to protect them and defend himself from unknown assailants. This is far from your average mystery: Piccirilli presents us with realistic characters thrown into a world of dread, fear, suspense, thrills, chills, and darkness. That's not to say there isn't any lightness because there's plenty of wit, sardonic humor, and wisecracking. There's something here in SHADOW SEASON for every fan of dark, gripping literature.

Published by Thriftbooks.com User , 12 years ago
A former NYPD cop Finn teaches literature at the prestigious Upstate New York St. Valarian's Academy for Girls. Finn finds it ironic that his students wonder how he keeps his collection of books so brand new conceding how easy it is to maintain a pristine collection when you are blind. He has a relationship with Roz the nurse and muses over the crushes his students have on him except for Vi who he and the dean Judith worry about; he also wonders about his former wife Danielle. Christmas empties the school leaving a few loners with no place to go behind. A blizzard further isolates those still at the academy including Finn. However, the nurse and a student seem to have vanished. Almost immediately afterward, two thugs arrive demanding Finn pay his debt or else. As he fears for those trapped inside the school, he thinks of his detective partner Ray and how many ways he would relish killing him, but for now must somehow deal with the "ill will" of a killer leaving dead students and faculty in his or her wake. This is an exciting action-packed thriller that hooks the audience from the moment Finn begins his musing and never slows down as the readers wonders why someone is mass murdering those trapped at the school. The story line is fast-paced once the characters are set and never slows down until the anticipated final confrontation with the ill wind and the academy's champion, a sort of good vs. evil battle on a small scale. SHADOW SEASON is an engaging tense tale as Tom Piccirilli provides a superb suspenseful story. Harriet Klausner
Copyright © 2020 Thriftbooks.com Terms of Use | Privacy Policy | Do Not Sell My Personal Information | Accessibility Statement
ThriftBooks® and the ThriftBooks® logo are registered trademarks of Thrift Books Global, LLC