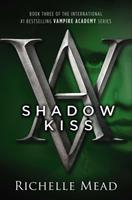 (Book #3 in the Vampire Academy Series)

Is Rose's fate to kill the person she loves most? It's springtime at St. Vladimir's Academy, and Rose Hathaway is this close to graduation. Since Mason's death, Rose hasn't been feeling quite right. She has dark flashbacks in the middle of practice, can't concentrate in class, and has terrifying dreams about Lissa. But Rose has an even bigger secret . . . .She's in love with Dimitri. And this time, it's way more than a crush. Then Strigoi target the...

This is the book that changes everything.

Published by Thriftbooks.com User , 5 years ago
This book starts at when Rose and the rest of her friends are back at the Academy learning to move forward without Mason. But then Rose starts seeing Mason's ghost. She tries to hide it from everyone but it eventually comes out in typical Rose fashion, like an explosion. Everyone is deeply changed by the events that happened in Frostbite. They are not kids anymore. They lived through a horrible thing. So many things happen in this book and it's ending will make you grab the next book in the series and start reading it right away. I didn't have the next book and I got up and started hunting for it online so I could read it right that moment.

Published by Thriftbooks.com User , 13 years ago
Shadow Kiss completely wrapped its every last word around me and choked me silent with anticipation every turn of a page. Rose has finally realized that there is a bigger meaning to being "shadow kissed" then just sharing a powerful bond with her best friend. In this realization, changes start to surround her in a negative way. She starts to question her life, her relationships, and her supposed delusions. In conclusion, even without having all the answers, one thing is unquestionably certain, her unconditional love and devotion to Dimitri and later she learns that the feeling is utterly mutual. Two halves to make the most beautiful and perfect whole. Protecting Moroi always comes first, as is the dhampir motto. During the heat of battle and finding the whereabouts of the enemy by way of a dear friend who had since past. Things spiral downward and never stop until it reaches complete darkness. I have been weeping for a few days every so often I ponder about the book. Always thinking of how things could have been different if only they may have taken the opposed approach; but since Rose's maturity and discipline has risen way beyond her years, it seems the only explanation is that it was just meant to be the way it proceeded, how ever morbidly devastating it was. Anxiety and depression has set in as the wait for what Ms Mead will throw at us next. Bleedingly heavy on the heart, yet I could never get enough. The series gets better and better.

Published by Thriftbooks.com User , 13 years ago
This book, the third in the Vampire Academy series by Richelle Mead, ended very sadly... Rose has been feeling more and more dark and depressed ever since her friend Mason died while he, Rose, Eddie, Christian and Mia were trying to escape their kidnappers. Rose had managed to get them all out and was facing the two Strigoi herself but Mason came back for her and got killed in the fight. Rose managed to slay the Strigoi captors and now bears the molnija tattoos, but nothing can take away the pain of his death. Worse, Rose fears she's going crazy when she begins to see Mason's ghost around campus. Rose had a theory or two about why that was happening. And Adrian and Christian seem to have a few theories about her many violent outbursts lately. They surmise that with her bond to Lissa and being shadow kissed that she is able to pull the darkness away from Lissa. More trouble comes when the Strigoi attack the school leaving several Moroi and dhampir dead and many more captured. Rose helps the other guardians (including Dimitri) come up with a plan of offense to get the kidnapped back. I can't tell you how it ends; I don't want to spoil it. But it is well worth reading even if it did make me terribly depressed. I have a theory about what will (hopefully!) happen in the fourth book that will put things to rights and I can't wait until it comes out to see if I'm right.

Published by Thriftbooks.com User , 14 years ago
A little background... I am in my mid 20's and a high school teacher who loves to read when I can but doesn't get much time to do it in. I picked up the twilight series a year ago at a students request and was pleasantly surprised. Once the series was finished I needed another one! Before Twilight I had not been into teen romance/ fantasy books especially with vampires and such. I saw a book-list of recommendations by Twilight followers and picked up the "House of Night" series by PC Cast. This was worth reading and I am waiting for the next book to come. My husband now calls me addicted to Vamps since I started looking for a new series to pick up. I was strongly recommended to pick up the Vampire Academy series by my 20 year old sister who has always been a fan of this genre of books. Wow! I loved this series, I know I might get some backlash on this from serious twilighters out there but I would say this is a close second to twilight though it has a very different storyline/plot. I love the background Richelle Mead gives her characters even ones that don't seem to significant at first. Rose is an amazing self conflicted character to read about. A young but amazing heroine conflicted between her life duty/purpose to protect her best friend Lissa, a last in her family royal, or choose another "alluring" path. Rose is a woman coming into her own through the series having to deal with self conflictions while those around her often idolize her more than she likes. Oh, and the fact that there is a gorgeous & lethal male "mentor" named Dimitri in it doesn't hurt! In this latest installment things heat up between a few characters and hard decisions are made that will touch everyone in the long run. I have enjoyed each of the books but "Shadow Kiss" is what I would call the best in series so far. It is longer, which is great for how fast I read, and for those of you who like a little adult content this book alludes to some in a tasteful way. This is the most "mature" book and has lots of action and some new characters who I find very interesting. I couldn't put this book down. I bought it the day it was released and finished it one day (reading in between classes and my lunch break). I love it when a book can grab me and by the end of the book make the story seem complete but at the same time still agonizing that the next book doesn't come out until late next year! I hope this helps anyone looking into the series and if you already have read the first two there is no way you should pass this one up (as I said it's the best so far). Anyone out there who enjoyed the The Twilight Saga: Slipcased or Untamed (House of Night, Book 4) then I would highly recommend picking up the Vampire Academy series. I am not guaranteeing anything because as I tell my students "everyone has and is entitled to there own opinion", however I have run across students and adults alike who liked this genre and were not to impressed with Twilight but still found this series a g

Up all night, disturbed and sad

Published by Thriftbooks.com User , 14 years ago
I didn't want the book to end. But by the time I got to the end I was so drained, emotionally and physically (pacing around reading) I collapsed in a heap. First of all is a change in Rose. Not only does she view her relationship with Lissa differently, she starts to question her purpose in life and the choices that have been thrust upon her. The life of a dhampir is one of duty and hardship. She'd always thought the only other choice was to be be a blood whore, so of course, being a guardian for her best friend, the Dragomir Princess was a better life. But all that is turned on it's head when she discovers the true meaning of what it means to be Shadow Kissed. That it wasn't just a name given to St. Vladimir's friend and help mate, Shadow Kissed Anna, there was a more relevant meaning behind it. With this knowledge and the disturbing presence of a lost friend, her life is in turmoil when it should have been smooth sailing with Victor Dashkov in prison and the trials going swimmingly for her. Then comes tragedy. I can't write about it. I don't want to spoil the book for anyone, I will say this though, I spent over half the book cringing at each page I turned, hoping that I was wrong, that Ms. Mead wouldn't do what I was terrified she would do in the end. So by the time it happened I was a mess; weepy and depressed. I hate and love this book. I can't wait for the next one, so addicted.

Published by Thriftbooks.com User , 14 years ago
I LOVED this book. I got it in the mail yesterday and finsished it last night. First, I was pleasantly surprised to find how big the book was. It's the size of Vampire Academy plus half of Frostbite. The more the better I say!! Second, the plot was just fantastic. It moved quickly and didn't drag on and the transition from Frostbite to this book flowed very nicely. Theres lots of drama with Rose and Liss and Christian and Dimitri and Adrian that just keeps going throughout the whole book. I don't want to give away the ending but I must say that although I was shocked by the outcome, I definitly saw it coming. We definitely see a resolution with the Rose-Dimitri relationship and we end the book with a huge cliffhanger that made me feel very sad that I have to wait probably another year to see what happens next. Overall, this is a really good book and a great addition to the Vampire Academy series.
Trustpilot
Copyright © 2022 Thriftbooks.com Terms of Use | Privacy Policy | Do Not Sell or Share My Personal Information | Accessibility Statement
ThriftBooks® and the ThriftBooks® logo are registered trademarks of Thrift Books Global, LLC