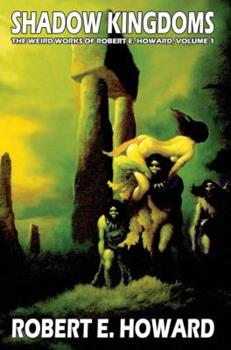 (Book #1 in the The Weird Works Of Robert E. Howard Series)

Shadow Kingdoms is the first volume of the Weird Works of Robert E. Howard, presenting all of Howard's work for the pulp magazine Weird Tales meticulously restored to its original magazine texts. This volume begins with "Spear and Fang," Howard's first professional fiction sale, and concludes with "Red Thunder," a gripping sword & sorcery tale. Series characters present in this volume include King Kull and Solomon Kane. Edited by Paul Herman. Introduction...

Published by Thriftbooks.com User , 12 years ago
Shadow Kingdoms is volume one of Wildside Press's series of ten books collecting "The Weird Works of Robert E. Howard," namely Howard's stories as published in the magazine Weird Tales, in chronological order. Audio publisher Audio Realms has taken a selection of the stories in that volume and produced an unabridged recording of its own, also called Shadow Kingdoms. Though they're not the first ones presented, I began with the three stories of my favorite character, Solomon Kane, featured in this collection. "Red Shadows" introduces Howard's 17th-century Puritan hero. Avenging the death of a young woman, Kane travels for years to find Le Loup ("the wolf"), meeting "good juju man" N'Longa -- who later plays a larger role in Kane's life -- for the first time. Howard doesn't shy away from the action here, putting Kane in peril no less than three times. I've experienced "Red Shadows" multiple times, in print and audio, and it never loses its power to entertain. Both Kane and Le Loup are indelible characters, and the action sets up Kane admirably well for his later stories. In "Rattle of Bones," Kane and Gaston L'Armon enter a tavern for the night and discover there's a good reason it's called "The Cleft Skull." This story and "Skulls in the Stars" have suspense, death, and insanity portrayed with skill, and they really show Howard at his best. In some ways, Solomon Kane reminds me of the Western hero: stoic and strong and operating under a strict moral code of his own devising. The Kane stories offer the same kind of entertainment provided by modern Western series like The Trailsman and The Gunsmith: a sole hero who comes in, solves a problem, and travels off again, ready for another adventure. "The Lost Race" is one of the earliest of Howard's Weird Tales publications, from 1927. Howard's appreciation of the history of the Pict race was already long-standing. In this tale, a fellow named Cororuc happens upon some dwarfish folk ("small dark people") and gets mixed up in an age-old revenge. Written when its author was only 18, it has a tangential relationship to his stories of Bran Mak Morn (though the Pict king himself is not mentioned). "The Dream Snake" stands out as a particularly well-done pure horror story in the classic told-by-the-campfire vein. That is, its ending is entirely predictable and, in fact, inevitable from the beginning. But Howard's portrait of a man in the grip of an intense lifelong fear (from a horrific recurring dream) is utterly believable. A well-performed reading of "The Dream Snake" could be the highlight of any Halloween night storytelling session. "The Hyena" is a high-energy adventure tale set in Africa and involving the antagonism between a fetish man and an American rancher. The American is kind of dumb -- I guess he's never read this kind of "twist" ending before -- but this doesn't ruin the tense showdown. "The Shadow Kingdom" is the first featuring Kull from Atlantis, usurping king of Valusia. Kull meets his

Published by Thriftbooks.com User , 13 years ago
The few people that knock this book of REH are subjective. Robert E. Howard (1906-1936)was and still is the greatest adventure story teller wordsmith of all time! Any time you can get one of his books please do. It's non stop action, terror, adventure, and more! Two of my favorite stories are The Dream Snake, Weird Tales, Feb 1928 and The Hyena, Weird Tales, Mar 1928. Red Shadows is superb, too; This is about Solomon Kane who hunts a wolf named Le Loup. There's some excellent poetry. Must read books of REH are: The Last of the Trunk, The Never Ending Story, and all Weird Works by Paul Herman, Blood & Thunder, The Life & Art of REH, by Mark Finn, Selected Letters of REH Vol 1-3 and Poetry by Rob Roehm, One Who Walked Alone by Novelyne Ellis, The Black Stranger, Lord Samarcand, Two Gun Bob, The Dark Barbarian and The Barbaric Triumph by Don Herron. Two of my all time favorites of REH are Beyond The Black River about Picts and Red Nails. Check out the REH Foundation and Forum!

Published by Thriftbooks.com User , 15 years ago
This collection, containing Howard's earlier weird stories, starts off with a bang: "Spear and Fang", the first tale, is very good, and there are no duds thereafter; every story or poem in the book is worth reading. The original Solomon Kane and King Kull tales are here, and they are most interesting. The dustjacket art by Stephen Fabian is gorgeous and creepy; I hope to see his artwork on the covers of every volume in this set.

All the classic "Weird Tales" fiction of Robert E. Howard!

Published by Thriftbooks.com User , 16 years ago
SHADOW KINGDOMS is the first volume of the Weird Works of Robert E. Howard, presenting all of Howard's work for the pulp magazine Weird Tales meticulously restored to its original magazine texts. Edited by Paul Herman. Introduction by Mark Finn. Cover by Stephen Fabian. This volume contains: Two-Gun Musketeer: Robert E. Howard's Weird Tales, by Mark Finn Spear and Fang In the Forest of Villefère Wolfshead The Lost Race The Song of the Bats The Ride of Falume The Riders of Babylon The Dream Snake The Hyena Remembrance Sea Curse The Gates of Nineveh Red Shadows The Harp of Alfred Easter Island Skulls in the Stars Crete Moon Mockery Rattle of Bones Forbidden Magic The Shadow Kingdom The Mirrors of Tuzun Thune The Moor Ghost Red Thunder
Copyright © 2020 Thriftbooks.com Terms of Use | Privacy Policy | Do Not Sell My Personal Information | Accessibility Statement
ThriftBooks® and the ThriftBooks® logo are registered trademarks of Thrift Books Global, LLC