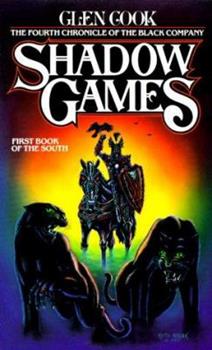 Shadow Games: The Fourth Chronicles of the Black Company: First Book of the South

After the devastating battle at the Tower of Charm, Croaker leads the greatly diminished Black Company south, in search of the lost Annals. The Annals will be returned to Khatovar, eight thousand miles away, a city that may exists only in legend...the origin of the first Free Companies. Every step of the way the Company is hounded by shadowy figured and carrion-eating crows. As they march every southward, through bug infested jungle, rivers dense...

Published by Thriftbooks.com User , 15 years ago
Reeling from the battles at the Tower of Charm in the service of the Lady, the remains of the Black Company begin a new journey - back to the Hhatovar of their origins, lost in the jungles of the south. Still under Croaker's lead the compulsion to return seems like an elephant's last voyage to the graveyard. With the original volumes of the Company's history lost, no one knows what Khatovar really was, or why there ever was a Black Company, but the trip south stirs memories of the last free company of Khatovar, and they aren't fond ones. Danger and unwelcome friends seem to lurk everywhere. Croaker's first stop is Taglios, where the Company undertakes to provide help in a struggle with four shadowmasters who are extending their own empire. Like the Taken before them, these are wizards who have little care for the humans who serve or oppose them. The Taglians are the last free people before this new dark empire and the Company needs to get rid of the bad guys before they can reach their own origin point. Unfortunately for the Company there are some Taglians who recall the legends of the times when the Black Company headed north with considerable fear, and cooperation and trust are in thin supply. This will be the last volume written from Croaker's viewpoint (have no fear, he still will have a part to play) and it develops his new role as captain as well as a growing connection with the more human side of the Lady. The latter has expended all her power in the struggle to keep her old husband, the Dominator, from re-entering this world. Her new vulnerability doesn't make her a weak character, and her knowledge and experience make her an asset as the Black Company once again tries to extract disaster from the jaws of success. Glen Cook proves that there is life after a trilogy as he begins the transition volumes (The Books of the South) that will lead into the Glittering Plain series. This transition of the Black Company from a tool of political empire building to an almost mystical entity with a serious, and perhaps deadly, agenda of its own makes a strong story all on its own. There are quite a few surprises to come, and Shadow Games is an example of perfect scene setting as the rules and the environment begin to change. Cook's writing continues to mature, defying the principle that a prolific writer inevitably dilutes his strength.

Published by Thriftbooks.com User , 16 years ago
I was surprised to see this years ago...assuming the Company series was over. It starts a new chapter in the Company and marks the beginning of a very involved storyline.

Published by Thriftbooks.com User , 18 years ago
I too am tempted to say "this isn't up to the standards of the first 3". But I think a lot of that has to do with the fact that, when I discovered Cook, this was his most recent book. So I had to wait for each installment afterwards. I wish I had followed the rule I instituted when it became clear Robert Jordan was NEVER going to finish his series. I should have waited until Cook was done, and then read them all. But it's a testament to my fanaticism that I just HAD to read each book as it appeared. I still give it 5 stars because I found the new storyline with the now-powerless Lady very intriguing. Cook also had my curiosity at max with "the crow" and the hints that old villains might return. Overall, the rest of the series was ultimately excellent so this book has to get 5 stars for starting it all.

Published by Thriftbooks.com User , 23 years ago
The Black Company is not at all that popular (I do not know why. It is one of the best fantasy series out there.) The originallity of this series is outstanding. I do not know how people love wheel of time(which copies so many things from tolkien it is not even funny) and say it is so original and cringe when they here the words, "The Black Company". It is done in many different views. Some chapteres are told by Croaker while others may a 3rd person perspective.die? Shadow Games was a great book full of action. It was so good I read the entire book in a day! After you finished the White Rose definetly read this book!
Copyright © 2020 Thriftbooks.com Terms of Use | Privacy Policy | Do Not Sell My Personal Information | Accessibility Statement
ThriftBooks® and the ThriftBooks® logo are registered trademarks of Thrift Books Global, LLC