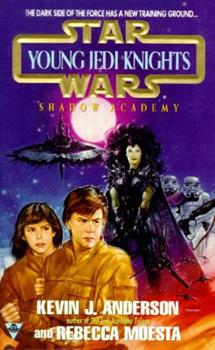 Driven away from Luke Skywalker's Jedi academy for pursuing the Dark Side of the Force, former student Brakiss masters his dark powers, establishes the Shadow Academy for aspiring Dark Jedis, and... This description may be from another edition of this product.

Published by Thriftbooks.com User , 14 years ago
The second book in the Young Jedi Knights Lowie, Jaina and Jacen are visiting Leo's newest business GemDriver when its suddenly attacked by an Imperial fleet. The Jedi are kidnapped and taken to the Shadow Academy, where students are being trained in the dark side of the Force by a Dark Jedi who has teamed up with the Night Sisters of Dathomir. Tenel Ka missed the tripped because she was meeting with an ambassador. She and Luke go after them. Another very exciting story.

An Incredible Sequal to the Young Jedi Knights Series

Published by Thriftbooks.com User , 18 years ago
I especially liked this Book because it really starts the Jedi/Sith relation ship and it begins the actual story because it introduces the real enemy to the Jedi: The Shadow Academy.In this book, Luke tells the Young Jedi knights that he encountered spies in his acedemy long ago, sent by the Second Imperium. Luke came across one truely talented young man by the name of Brakiss. Instead of banishing him like the others, he decided to keep him and train him. Luke made an attempt to turn him from the dark side.One day, while Luke was giving the young man lessons, Brakiss left the Jedi acedemy and fled. Luke had failed to turn him and later will encounter him in a more deadly form.The Solo twins, Jacen and Jaina, and their friends, Lowbacca and Tenal Ka, have been given permission by Lando Calarissian to come to his Gem diver station located on the Gas Giant Yavin. They all decide to go, except Tenal Ka. She imforms her friends that she thinks that the experiance would be boring and that she had seen rainbow gems on Gallinore. When the twins arrive at the Gem diver station, Lando shows them around and tells them how his company mines a very rare gem known as Corusca Gems. When Lando is done showing them how to capture the gems, an unknown fleet appears. Lando tells them that nothing could get past their heavily armored walls, but the fleet had a speacial mechanism that got through. They later relise that the ship was using Corusca Gems to cut trough. When the ship docked with the station, and Dark women walked into the station with a squad of strom troopers. Jaina, feeling a distrubance in the force, somehow knew that they were after her and her friends.The dark women stunned all the guards and captured the young jedi knights and took them to the Shadow Acendmy where they would be trained as Dark Jedi to assist the Second Imperium.I really enjoyed this book and it was a very good addition to the Young Jedi Knights series.

Published by Thriftbooks.com User , 18 years ago
This is probably one of my favorites in the Young Jedi Knights sereis. Jaina, Jacen, and Lowie go to Lando's GemDiver station. While they're there, a group kidnapps them. They are taken to the Shadow Academy to be trained in the Dark Side of the Force. Meanwhile, Tenal Ka and Luke learn of the kidnapping and set out to find the twins and Lowie. Will Luke and Tenal Ka find Jaina, Jacen, and Lowbacca? Or will the Shadow Academy succede where the Emperor did not(turning the heirs of Anakin to the Dark Side of the Force)? Grab this book and find out! You won't regret it!!![.]

Another great book in the "Young Jedi Knights" series!

Published by Thriftbooks.com User , 19 years ago
This story is about the Dark Jedi apprentice starts his own school of training Dark Jedi-the Shadow Academy. Luke Skywalker had once tried to turn him, but the evil training of the Empire proved to be firmly placed inside him. He had disappeared...only to reappear now.Meanwhile, the twins and Lowbacca are visiting their adopted "Uncle" Lando's GemDiver station, the job of the place is to capture valuable Coruscan gems. Suddenly, an Imperial fleet appears and attacks the station. The Imperials shoot all the workers, including Lando, into unconsciousness and kidnaps the twins and Lowie. Tenel Ka, who didn't go along with them because she had to have a meeting with the Ambassador Yfra, and Luke Skywalker race to find them. They find out that the Nightsisters of Dathomir, who had been all destroyed, was rising up again and were making alliances with the Empire. They also find out that the twins and Lowie had been taken to a Shadow Academy...to be trained into becoming Dark Jedi Knights for the rising Empire.What will happen to the twins and Lowie? Will Luke and Tenel Ka be too late?This book is great, I love reading it! I'm sure you will too, and the next book, "The Lost Ones" is just as good so you will want to read it as well!

Published by Thriftbooks.com User , 19 years ago
Any Star Wars fan out there must read this book. The Solo children are some of the best Star Wars characters ever and they are really good in this book too. This was sooo exciting; I couldn't put it down. Jacen, Jaina, Lowbacca, Tenel Ka, and Luke are really cool. Nobody went out of character, and this book was never boring. The plot was very original. A MUST-read for any fan. Do yourself a favour. READ THIS BOOK!!! Also, read the other Young Jedi Knights books too, because they're awesome!
Copyright © 2022 Thriftbooks.com Terms of Use | Privacy Policy | Do Not Sell My Personal Information | Accessibility Statement
ThriftBooks® and the ThriftBooks® logo are registered trademarks of Thrift Books Global, LLC