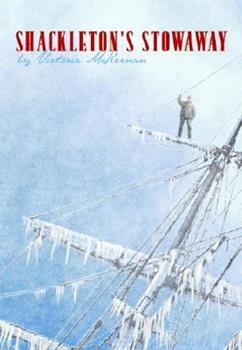 On October 26, 1914, Ernest Shackleton's Endurance set sail from Buenos Aires in pursuit of the last unclaimed prize in exploration: the crossing of the Antarctic continent. The crew stood on deck to watch the city fade away. All but one. Eighteen-year-old Perce Blackborow crouched below in a cramped locker. For two long days as the Endurance rolled and pitched, Perce's head spun. He'd actually done it. Stowed away. What was the worst that could happen...

Shackelton's Stowaway is an awesome book!

Published by Thriftbooks.com User , 12 years ago
Shackelton's Stowaway is a very entertaining book. It tells you a lot about history and is full of adventure. We read it for literature circles (six of us), and thought it was amazing! We can't wait to read it again and again!

Not just for teens!

Published by Thriftbooks.com User , 14 years ago
In 1914, 18-year-old Welshman Perce Blackborow and his American shipmate Billy Bakewell find themselves stranded in Buenos Aires after losing their berths to a shipwreck. Famed British polar explorer Ernest Shackleton's ship Endurance is in port, and needs replacements for two drunken crewmen. Billy gets hired because of his already rare (even this close to the golden age of sail) experience with sailing vessels; but Perce, who has nothing to offer except youth, strength, and willingness to work hard, only manages to join the expedition by hiding in another sailor's footlocker until the ship is too far at sea for Shackleton to do anything except put the stowaway to work. The great man, whom Perce holds in awe, warns the youngster that in times of desperation stowaways are always eaten first! So begins Victoria McKernan's novel based on the real Perce Blackborow, who did everything ascribed to him in her book except keep a journal. She takes the carefully researched facts of this adventure (chronicled by Shackleton himself in South) and writes them from the viewpoints of the men involved, and the result enthralled me. This is listed as a novel for teens, but I found it well worth an adult reader's time. I especially appreciated the author's notes at the book's end, in which she identified the few points at which she took liberties with known facts (mostly a matter of tweaking the time line to give her story a smoother flow). Hopefully many readers in her intended audience will go on to read South, and wind up - like me - hooked on such books for life.

Published by Thriftbooks.com User , 16 years ago
"Shackleton's Stowaway" is a fabulous piece of historical fiction. Well-researched, the characters come alive in this compelling story of survival, hope, and courage. The writing is excellent, and the story a real attention-getter for children. The virtues of another time come to life under McKernan's creative crafting of an unforgettable story.
Trustpilot
Copyright © 2022 Thriftbooks.com Terms of Use | Privacy Policy | Do Not Sell My Personal Information | Accessibility Statement
ThriftBooks® and the ThriftBooks® logo are registered trademarks of Thrift Books Global, LLC