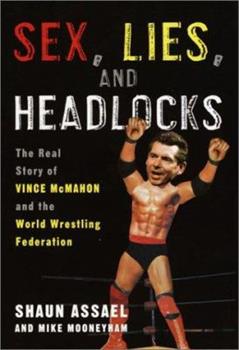 Sex, Lies, and Headlocks: The Real Story of Vince McMahon and the World Wrestling Federation

by Mike Mooneyham and Shaun Assael

From the cable television ratings to the bestseller lists, professional wrestling is red-hot. How it got that way is not a pretty picture, but it's one that is painted in more detail than ever before in Sex, Lies, and Headlocks, the first in-depth, journalistic look at the world of wrestling. At the heart of the story is Vince McMahon, the mercurial owner of the World Wrestling Federation. The authors trace his beginnings as the forgotten son of a...

Published by Thriftbooks.com User , 19 years ago
As a long time fan of wrestling, I've always been fascinated by the rise and fall and eventual rise again of Vince McMahon's WWF/E. If you're interested in an unbiased review of the history of wrestling, this is the book to buy. I'd recommend this book over just about any autobiography because it is written by outsiders, not former wrestlers who will put their own self-serving spin on things. This book does an excellent job of not only chronicling McMahon's rise to wrestling glory, but other promotors as well, namely, his longime archrival, Ted Turner. I was also pleasantly surprised to see an extensive review of the wrestling industry's beginnings all the way back to the formation of the NWA. Even if you're a hardcore fan this book will give you some little nuggets of information that you probably didn't know. The only complaint I have about this book is that the authors didn't go into much detail about the Stone Cold Steve Austin character. In my opinion, his character was the most important vehicle that allowed McMahon to rise from near bankruptcy and lead the WWF into it's most successful era of the late ninties. Having said that, however, I really do recommend this book. It's a good read and a quick page turner.

Published by Thriftbooks.com User , 19 years ago
Sex, Lies, and Headlocks is perhaps one of the most revealing narratives ever composed on the subject of professional wrestling. The authors have laid bare much material about the business that was once considered inside information and not for public consumption.In effect, the reader is treated to a fascinating back-stage look into how Sports Entertainment emerged from humble beginnings into a corporate and television empire. Centering around the World Wrestling Federation (WWF) dynasty is Vince McMahon, the company owner, with him being an essential focal point in the book. Virtually no stone is left unturned in the revelations of how be bought the company from his father and used, sometimes ruthlessly, whatever business tactics he needed to buy out his competition and solidify his domination in the wrestling market.Not without its myriad problems during its rise to greatness, the WWF would absorb many situations that pushed it close to failure on several occasions. Among some incidents would be rampant steroid use by wrestlers and revealing sex scandals in the 1980s. Rebounding from this and moving into the 1990s, Vince McMahon would eventually go head to head with media mogul Ted Turner regarding their many ugly battles to ruin each other and gain domination in the cable television market.Shifting into the late 1990s and approaching the new millennium, the WWF would finally begin its eventual rise to the top through perseverance and shrewd business dealings that have made it the sole professional wrestling powerhouse they are today.Sex, Lies, and Headlocks is a very well written and researched book and is probably the closest look you will ever get to truly knowing and understanding the WWF's history and its secrets. For all fans of Sports Entertainment, this book is a real treat and comes highly recommended.

one of the better wrestling books out there

Published by Thriftbooks.com User , 19 years ago
Having read several books on professional wrestling, I've seen many different stories and perspectives of the business (and of the WWF, in particular). Most of the books I've read have been personal biographies and focused mostly on the situations regarding that particular wrestler (be it Mick Foley, Hulk Hogan, or Bobby Heenan). These books have not dealt with WWF Corporate or with Vince McMahon (except as he related to the performer). Sex, Lies, and Headlocks focuses directly on WWF Corporate and Vince McMahon himself. The book begins by tracing the origins of the WWF. Even before Vince McMahon, Jr was born, we see his father starting his own federation and competing directly against the National Wrestling Alliance (NWA). No mention is made, however, of the fact that Vincent McMahon, Sr, was on the board of the NWA and helped decide on who the NWA Champion would be. We do see McMahon, Sr, build up the WWWF (World Wide Wrestling Federation) and have it be a successful federation on the east coast. McMahon, Sr. wanted his son to have nothing to do with the business but Vince was persistent and eventually became a ring announcer for his father. As time went on, Vince was given his own federation to own (a smaller regional federation). By the time his father was ready to retire, Vince was prepared to buy the WWWF. He did so and renamed it the World Wrestling Federation (WWF). He was able to put together a company that while it was not losing money, it was not making very much, either. It wasn't until he decided to take a huge risk in putting together a huge event on closed circuit television that Vince was able to make his company a success. That even was Wrestlemania. If this book was only about the rise of the WWF, it would still be an interesting book....but it wouldn't be as good. This book also chronicles the rise of Ted Turner's WCW and how Vince McMahon ended up purchasing his long time rival's company. We are also introduced to the amount of steroid use that was rampant in the WWF in the 1980's (and may very well still be). I learned more about Vince's failed business ventures than I previously knew of (a professional bodybuilding federation?) and a bit more into the XFL. This was a very interesting book and it paints Vince McMahon in a very negative light. Since this gives a very one sided look at McMahon, it should also be read in conjunction with other wrestling books to give a more rounded perspective on McMahon and the company.

Published by Thriftbooks.com User , 20 years ago
Before starting Shaun Assael's Sex, Lies, and Headlocks, I was fearful that it would be a totally one sided bashing of Vince McMahon and the wrestling empire that he has built. And while the book is critical of many of the means that Vince used to get where he is, it is also a very nice historical perspecive of the history of the business itself. I didn't expect it to go into as much detail as it did on the rise and fall of some of the other organizations, especially WCW and it's Monday Night Wars with the WWF. Having been a long time fan, much of what I read I had known of before, but there was information that I hadn't heard as well. This is a great read if you are interested in the business and the behind the scenes dealings of it. If you are a die hard Vince McMahon fan, you may not like or believe all of what you read. But, I can't imagine anyone with an interest in wrestling not gaining some knowledge of the business that they didn't have before.

An Intelligent Read on a Facinating and Timely Subject

Published by Thriftbooks.com User , 20 years ago
If you are hungry for a steamy, selacious tale of the wrestling industry with all its scandals, written with a locker room mentality, you will need to dine elsewhere. If you are looking for an excellent account of the modern evolution of wrestling business and the phenominal growth and genius of the McMahon empire your search can end here.Worthy of any business shelf in any library as well as the sports and entertainment sections, Sex, Lies, and Headlocks gives a fact filled, well researched and written account of how Vince Mcmahon and his World Wrestling Entertainment Corporation became a major forse in the entertainment industry. If Harvard Business School invited Vince McMahon to adress its students, the world of business, spots, and entertainment would do well to sit up and take notice.Assel and Mooneyham have brought forth a facinating story to light. From the inception of the modern NWA in 1948 to the collapse of Mcmahon's chief rival, WCW, this book chronicles McMahon's gutsy and innovative business acumen through various tribulations and triumphs.Unlike so many other books written on wrestling as of late, Sex, Lies, and Headlocks does not nor does it need to delve into the gossip of the various athletes just to satisfy a curious audience. What it does do, however, is offer a facinating story of the World Wrestling Entertainment Corporation, an organization that has captured the imagination of millions of viewers and observers worldwide.Without a doubt, this is one of the most well written, honest, and intelligent book written on wrestling in some time. A professional job from start to finish.It would be hard to believe, that anyone with an interest in business, sports, entertainment, or wrestling, after reading this book once, would not be compeled to pick up this book again and again.
Trustpilot
Copyright © 2022 Thriftbooks.com Terms of Use | Privacy Policy | Do Not Sell My Personal Information | Cookie Preferences | Accessibility Statement
ThriftBooks® and the ThriftBooks® logo are registered trademarks of Thrift Books Global, LLC