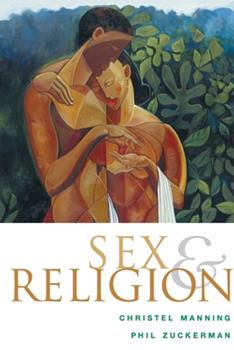 by Phil Zuckerman and Christel Manning

Introducing a variety of perspectives on sex taken by many of the world major religions, SEX AND RELIGION focuses on both the historical development of these perspectives as well as their most current manifestations. Each chapter is written by a distinguished scholar in the particular religion(s) and offers an overview of the doctrines of each religion and how they inform their adherents' views on sexuality and gender.

Published by Thriftbooks.com User , 13 years ago
Though I didn't agree with everything the authors put forth, I did find the book helpful in several ways. It was not a typical, shallow report on extremist views of any particular religion. There seemed to be an apparent objectivity, allowing the readers to make conclusions for themselves. Some of the statements may be over generalized but in all fairness, they chose not to exaggerate fringe beliefs of the major religions. How the authors decided what was a "major religion" must have been a daunting task. They did mention that they ran into trouble for example with some Mormons who wondered why they were listed separately from Christians. This book was written by authors who for the most part came from a Judeo / Christian background. No doubt that makes the research a little more slanted This is an academic work and it does provide helpful information. All in all, it's a good read and I recommend it to my students in Philosophy class Terry Bell, author of the LOVE ETHICThe Love Ethic

Very good for basic information on the subject...

Published by Thriftbooks.com User , 17 years ago
I usually don't like edited volumes where the chapters are written by diffrent authors - the result is often that some chapters are strong, others not so. This is exactly the case here -- some chapters were very accessible and interesting, others were dry or overly-academic. However, they all cover basically the same areas -- which is good. I have read some volumes on sex and religion that are hyper post-modern and the chapters are personal essays or random rants. These essays are neither: they convey important information clearly, so you get a real sense of what these major religions "say" about sex. I liked the Introduction a lot. It was provocative and thoughtful. If you just want basic information on what various religions teach about sex, this is a great book to begin with.
Copyright © 2022 Thriftbooks.com Terms of Use | Privacy Policy | Do Not Sell My Personal Information | Accessibility Statement
ThriftBooks® and the ThriftBooks® logo are registered trademarks of Thrift Books Global, LLC