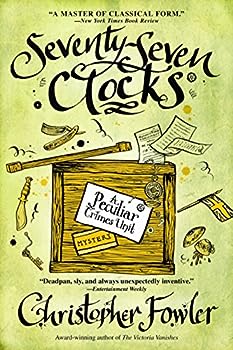 A mysterious stranger in outlandish Edwardian garb defaces a Pre-Raphaelite painting in the National Gallery. Then a guest at the exclusive Savoy Hotel is fatally bitten by a marshland snake. Over the... This description may be from another edition of this product.

Published by Thriftbooks.com User , 13 years ago
I really enjoyed this book. I liked the characters and it kept my interest through the whole book. As soon as I finished it I ordered the next one. A really good read

If you're new to the Bryant & May mysteries, don't start with this one...

Published by Thriftbooks.com User , 14 years ago
I love these old school detectives- no fingerprints, no fiber evidence here, just two cops bouncing ideas off of each other as they interview witnesses and suspects. Each book is set in London, and the city's rich history and geography play a part in each book. However, this book is not the strongest in the series. There are a couple of coincidences that don't work for me, and the plot is just so complicated that it strains belief. Read them in order, starting with Full Dark House. By the time you get to Seventy Seven Clocks, you'll forgive the author of any mistakes he has made.

Near Top of the Line, with VerySlight Flaws!!

Published by Thriftbooks.com User , 16 years ago
Yes, this is mostly a wonderful, realistic mystery where members of a family and 1800's guild end up dead for no apparent reason in 1973 England. Some fine characterisations, scenery, and 1970's culture, and classy writing throughout! Not to mention the intriguing interaction between the 2 eccentirc detectives in a new Crimes Unit. There is the by-now customary lack of fear among those linked with the victims,which seems very unrealistic, plus family squabbling that gets to be irritating. My main complaint is the solution,though interesting, seems somewhat over-inventive. Nonetheless, a very pleasant,interesting , and unique whodunnit that aproaches five-stars, but does not quite succeed

Published by Thriftbooks.com User , 16 years ago
The book itself was in like new condition, clean and apparently unread. The story was excellent, taking one back to London right after World War II. The characters were well drawn and interesting, primarily Bryant and May, but also some of their fellow investigators. A five star mystery, most enjoyable.

Published by Thriftbooks.com User , 16 years ago
As with Fowler's earlier Bryant & May novels, SEVENTY-SEVEN CLOCKS manages to perfectly balance complexity and suspense. The result is an enjoyable thriller that is both dark and charming. It's an unusual combination and one I find hard to resist. I discovered Fowler through his work in the horror genre - which I recommend heartily - and only found out about this series later. I was skeptical at first, but willing to give them a try because of Fowler's amazing ability to capture the feel of an environment with a minimum of words. At the very least I thought I might learn something I could apply to my own attempts at fiction. All pretence to analysis went out the window after the first few pages. A gripping mystery, well drawn characters, and an impressive sense of environment. Fowler just sucks you into the story and keeps it all moving until the very end. As with FULL DARK HOUSE and THE WATER ROOM, SEVENTY SEVEN CLOCKS relies a great deal on the history of London. That history is an important part of the investigation as Bryant & May look into a series of deaths in an odd family. Fowler expertly weaves a lot of background detail into the narrative as his elderly heroes dig ever deeper into the family's past. And the heroes themselves are delightful to follow. No pretense of hard-boiled toughness or superhuman intellect. Just two elderly men doing what they do in their own unique way. They're old. They're grouchy. And ultimately, more interesting. I've gotten tired of psychologically damaged detectives hunting down pyschologically damaged serial killers. What Fowler has to offer us is much more subtle, complex, and entertaining. I highly recommend the Bryant & May books for anyone interested in well crafted mysteries with a lot of character. SEVENTY SEVEN CLOCKS lived up to the promise of the others in the series and I can't wait for the next one.
Trustpilot
Copyright © 2022 Thriftbooks.com Terms of Use | Privacy Policy | Do Not Sell or Share My Personal Information | Accessibility Statement
ThriftBooks® and the ThriftBooks® logo are registered trademarks of Thrift Books Global, LLC