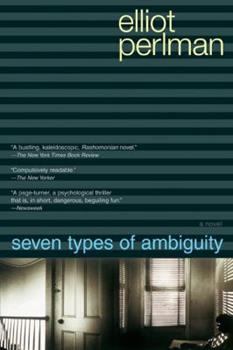 Seven Types of Ambiguity is a psychological thriller and a literary adventure of breathtaking scope. Celebrated as a novelist in the tradition of Jonathan Franzen and Philip Roth, Elliot Perlman writes of impulse and paralysis, empty marriages, lovers, gambling, and the stock market; of adult children and their parents; of poetry and prostitution, psychiatry and the law. Comic, poetic, and full of satiric insight, Seven Types of Ambiguity is, above...

Published by Thriftbooks.com User , 16 years ago
I read this book months ago, and I still think about its message every day. It is very difficult to catogorize as evidenced by the other book reviews. It is a love story, social commentary, extremely political novel that requires concentration when reading. Only one person has given this book a bad review, and he has a good point. The different chapters that are different points of view are in the same writing style. However, I don't know if the author of that review really realizes how difficult writing in different styles is (ever try Faulkner? That is fun reading isn't it?) I feel that the author did this deliberately in order to depict his message in unconfusing ways. Yes, the characters do not talk as people do in real life. (That is why I read books, personally; I don't like the way people talk in real life). It is gothic in style and magnificent in its scope. I think it is one of the best books I have ever read.

Published by Thriftbooks.com User , 16 years ago
The book is written from the perspective of seven different parties who were all somehow involved in an incident that impacted each of their lives fairly drastically. The unexpected pleasure of this book is that we get to know the characters and their thoughts and actions not only through their own perspective and section in the book, but through each of the other characters and their thoughts. Here is a beautiful female in love with a man she hopes loves her, but when we read from his perspective, she is barely mentioned and we find he is obsessed with one of the other female characters. It's a writing trick that lets us see the whole character and understand the whole story, as powerfully different as seeing something in 3d instead of two 2d, or stereo instead of mono. The book is full of the important and relevant things in life such as the power of young love, relationships with parents, communicating, learning and philsophizing with other students in college, how another student can almost overpower another with intelligence, leadership and sex appeal. We see intelligent people who love someone so much that they are willing to do things that are wrong to help him or her. And we see the pain husbands and wives can cause each other when they aren't able to take time to love and understand. Enjoy each section of the book and understand each personality. There is gold hidden throughout. We're never given information too fast. We discover the information gradually and sometimes not until we understand a character who is revealed three sections further into the book. It all comes together in the seventh section in an extremely subtle and well thought out seventh character. What a great book and great ending. Turow, Grisham, Patterson, you've got new competitor. A fellow barrister. Read his book and get nervous.

Published by Thriftbooks.com User , 16 years ago
I think the last time I was so impressed with a novel was when I read David Mitchell's "Ghostwritten". This was published at the very end of 2004 and for me it's the best of last year and probably this year as well. Billed as "an epic novel about obsessive love in an age of obsessive materialsim", the basic thrust of the story is about a man who never having gotten over a woman who left him ten years before, kidnaps her son. The brilliance of the novel is in it's construction. The book is segmented in seven parts, each narrated by a different player in the unfolding drama with sections and scenes overlapping in a 'Rashomon' like narrative. The only criticism I have with the book echos other reviewers, that many of the characters voices are similar. They all seem cut from the same Mensa cloth,being incredibly insightful,bright,and in tune with the human condition regardless of age, sex, or social standing.However as criticisms go, it's a small one, and one that doesn't detract from the awesome magnitude or scope of what I think is a phenomenal piece of literature.

No Ambiguity: This Is A Masterpiece

Published by Thriftbooks.com User , 17 years ago
Every now and then, a novel comes along that is so masterful, so breathtaking in scope, that everything you read afterwards pales in comparison. This is such a book. The author employs seven narrators, all of whom ultimately impact each others' lives. Each character is fleshed out so that the reader knows him or her through and through...right down to interior thoughts. One can only imagine the research Mr. Perlman had to go through to "get it right" -- from investment banking to gambling...from prostitution to literary matters...from psychiatry to research analyst. If there is a false note in any of these narratives, I wasn't able to detect it. The novel, seemingly, is about the trial of Simon, an unemployed teacher who, in a fit of obsessive love, kidnaps the son of Anna, the woman he has worshiped for many years. In reality, each character in this novel is going through his or her own trial. Each will end up in a different place than when the narration began. Each will go through the harshest judge of all -- himself or herself; some will make it, some will not. There is, indeed, ambiguity in literature, as there is in relationships and life in general. This novel can be read as a pure page-turner or it can be read for deeper meaning. I closed the book understanding a little more about myself. It is a rare book that allows the reader to do that.

Published by Thriftbooks.com User , 17 years ago
This daring and intriguing novel was my favorite of 2004. Australian author Elliot Perlman has chosen to tell his story from seven different points of view-not a new idea, but one that seems completely fresh and surprising in Perlman's hands. The characters he chooses as his narrators and the voices he gives them are what propels "Seven Types" ahead to an end that comes all too soon for the besotted reader. The publisher's tag line deeming this "an epic novel about obsessive love in an age of obsessive materialism" does not do it any sort of justice. This novel is about much more than that and should not be missed.
Copyright © 2022 Thriftbooks.com Terms of Use | Privacy Policy | Do Not Sell My Personal Information | Accessibility Statement
ThriftBooks® and the ThriftBooks® logo are registered trademarks of Thrift Books Global, LLC