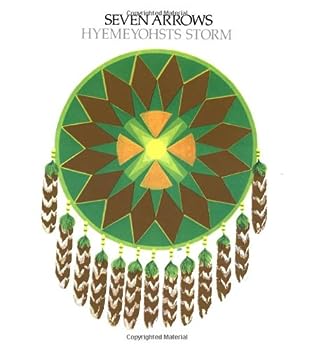 A heartbreaking story of victory, defeat, and of a spiritual search in a profane world, this is the story of Night Bear and his people. It is the tale of the land they cherish and the lives they hold... This description may be from another edition of this product.

A non-linear approach to the sacred way.

Published by Brad I. , 1 month ago
I first read this book many years ago when I was still a relatively young man on the spiritual quest. What struck me then, and still to this day, is the presentation of the "Way" on & in the Medicine Wheel. A non-linear view of what being a human being is supposed to be. Yes, I am very 'white'. But, having only 'tasted' the heyoka sweat, hemblecha vision quest and spirit journey my life has been blessed by the Medicine Wheel point of view. Storm is a wonderful spokesman for this vision. At the very least read the book and take it in. I think the lessons in this book can benefit all.

Published by Thriftbooks.com User , 17 years ago
Al Carroll's review is not the first encounter I've had with criticism of "the white man" continuing to abuse indians, now by "stealing" their religion. I am sympathetic with this point of view, but I also think that "the white man" desperately needs all the help he can get toward becoming more respectful of other life forms and more "spiritual" in the sense of being less materialistic. Surely, the religion and spirituality can be shared by all who need it.The beautiful artwork in Seven Arrows is criticized for "getting the colors wrong." This strikes me as a foolish criticism, as though the only valid interpretation of a traditional theme must have the traditional colors as well. This is reactionary thinking; for a tradition to be of the greatest value to the living, I think that change is sometimes necessary. If the artwork in Seven Arrows is valid as art, I think that's enough to justify its existence, regardless of its lack of "reverence to tradition." Not every crucifix needs to have a bleeding Christ on it. I don't recall what Storm says about the art in the book, but I don't think it's presented as "views of traditional Cheyenne art." It seems pretty clear that these are modern interpretations of traditional themes.In any case, if he "got the religion wrong" and "got the artwork wrong," it's still a dazzling book and I recommend it highly. You can read the "story of Jumping Mouse" from the book on Storm's web site, www.hyemeyohstsstorm.com.The following is the review I had on my web site before reading this current controversy:Hyemeyohsts Storm's Seven Arrows is a most unusual book, and reading it has been a profoundly interesting and moving experience for me. Seven Arrows is in the form of a novel with a lengthy nonfiction introduction and loads of artwork and photographs. However, as novels go, it simply fails to follow the convention, in two basic ways: most of the main characters are violently killed in the story, and the book contains half-a-dozen lengthy allegorical tales that dramatically slow the action.Overall the picture presented is that of the ending of a way of life and the introduction of a new way. The narrative mostly consists of characters riding or walking from place to place, meeting other indians (I believe there are no non-indian characters), talking about the latest doings of the crazy white man, telling stories, and killing or being killed. The death of the main characters is quite disconcerting at first. The novel begins by presenting the doings of a character, who is then killed. Another character becomes central to the story, and sooner or later he also is killed. Eventually one learns not to expect the current main character to survive; this expectation leads to abandonment of the usual "naive identification" that engages the reader to most novels and to take instead a more Olympian view. One begins to think of the human characters being as symbolic and allegorical as the mice, wolves, and buffalo that a

One of my two favorite books of all-time

Published by Thriftbooks.com User , 18 years ago
I was first introduced to this publication via the calendar that came out at the same time the book was first published (1974?). I was drawn to the art and the symbolism of the calendar's illustrations (medicine shields) and when I bought the book I was totally blown away by the stories and the philosophy within. I used the stories, especially "Jumping Mouse" in the elementary school classes I taught and they were as profound as any I've ever heard in my life. I still use this book as a personal source of strength and recommend it to anyone who is looking to go deeper in life. My other favorite book is "Zen and the Art of Morotcycle Maintenance" and the two are wonderfully complementary.

Time to get this book into the schools! Our kids deserve it!

Published by Thriftbooks.com User , 23 years ago
Seven Arrows is a story made for telling. I've heard Storm in person, and you know his stories are aimed at the next generation. This is probably the "Grimms Tales" of Native Americana, in a book. The imagery is specialised to show a tribal world view, just as if it were German or French; gets us the same results, and is as valid as Mother Goose or any-other curriculum for schools. Nothing else is required. The message is getting PEACE. This is done by all people in the same way, but they use differing techniques. That principle must be taught within our schools now so that the future population sees their own vision-quest as a means for life together peaceably with their fellowman. Seven Arrows has many features that could be used to advantage by teachers right here and now.

Published by Thriftbooks.com User , 23 years ago
Seven Arrows, the first book published in modern times about the Medicine Wheels, is now the classic volume on the topic. Written while ceremony was still illegal in the USA and the young generation was heartbroken, this courageous work by Storm brought him into the center of the whirlwind of controversary regarding the practice of Native American Spirituality. Seven Arrows is ground-breaking in many ways. It is a prime example of the oral tradition transformed into narrative prose and it is an entirely new novel form. It is classic Native American literature at its very best and is a must read for students of writing, literature, Native American Studies, and the Earth science and spiritual philosophy of the Medicine Wheels. This book has brought Hyemeyohsts Storm into the circle of truly great 20th century American writers. It has also given renewed hope to hundreds of thousands of people around the world.
Copyright © 2022 Thriftbooks.com Terms of Use | Privacy Policy | Do Not Sell My Personal Information | Accessibility Statement
ThriftBooks® and the ThriftBooks® logo are registered trademarks of Thrift Books Global, LLC