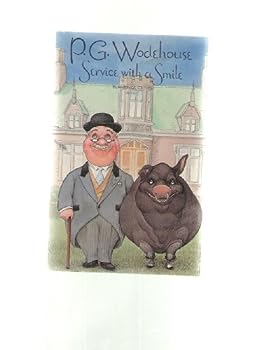 Service With a Smile

(Book #9 in the Blandings Castle Series)

The final Uncle Fred novel marks his return to Blandings Castle to relieve Lord Emsworth's woes: a nagging secretary, prankster Church Lads, and a plot to thieve his prize-winning sow. Uncle Fred must... This description may be from another edition of this product.

Published by Thriftbooks.com User , 16 years ago
Pongo Twistleton's Uncle Fred, the Fifth Earl of Ickenham, is dedicated, in his own words, to spreading sweetness and light wherever he goes (others have less complimentary words for what he does). In aid of this objective, he has previously appeared at Blandings Castle in the guise of the noted nerve specialist Sir Roderick Glossop, and been discovered as an impostor. While he remains a favorite of Clarence, the Ninth Earl of Emsworth and the proprietor of Blandings Castle, he is extremely unpopular with Clarence's sister Constance, who actually runs the place. No Blandings Castle novel is complete, of course, without at least one impostor, sundered hearts that must be reunited, the threat or actuality of the theft of the Empress of Blandings (the Earl of Emsworth's prize Berkshire sow), and an abundance of farcical monkey business. Wodehouse supplies all of these, plus the presence of the two Earls, each one of the great characters in literature, and Alaric, the Duke of Dunstable, an impossibly rude man and the perfect foil for Uncle Fred. All in all, a marvelously funny book by the greatest master of farce ever.

Published by Thriftbooks.com User , 17 years ago
Service with a Smile is my second favorite of the P.G. Wodehouse books about the daffy doings at Blandings Castle, and is exceeded only by Pigs Have Wings. If you have read any of the P.G. Wodehouse books about Blandings Castle, you know that the proprietor, Clarence, ninth Earl of Emsworth, is a simple man who simply wants to be left alone to contemplate his prize-winning pig, The Empress of Blandings, who has won the silver prize three years running in the fat pigs class at the Shropshire Agricultural Show. But he is beset by sisters who want to organize his life . . . and that of everyone else. The most frequently present of these sisters is Lady Constance Keeble, who is in residence in this book. Lady Constance is a widow and has her eye on a wealthy American, James Schoonmaker, whose daughter, Myra, has been brought to Blandings Castle by Lady Constance to keep Myra from marrying a curate, a poor but honest man. Lady Constance has no truck with poor people and she's confident that James Schoonmaker would feel the same way. The castle also contains Clarence's secretary, Lavender Briggs, who desperately wants to start up her own typing bureau but lacks capital; the Duke of Dunstable, who thinks everyone else is potty and wants to save a penny wherever he can; and Clarence's grandson, George, who has a new movie camera from his grandfather. All will play important roles in the developing plot. The catalyst for this marvelous story is the effervescent Frederick Altamont Cornwallis Twistleton, fifth Earl of Ickenham. As an old friend of the Schoonmakers, Freddie decides to bring the young people together in holy matrimony. To further this course, Freddie introduces the curate, one Bill Bailey (about whom many song jokes follow), into the castle as a Brazilian business man who has something to do with Brazil nuts. Freddie's plot is soon foiled though when Dunstable decides to grab the Empress by hook or by crook and Bill Bailey is blackmailed to help. How will the young lovers be brought together? Ickenham is a less scrupulous version of Galahad Threepwood, Clarence's younger brother, who was such a fixture in the old Pelican Club. He sees fatheaded rich men as being likely sources of capital for poor, but deserving younger people. He also believes in love and soon has two sets of young lovers to sort out. He has a strategic advantage in this plot in that his reputation precedes him and all those in trouble quickly come to seek his counsel. In the process, that allows Freddie to pull the strings almost as well as the fairies do in some of Shakespeare's lightest comedies. Like all of the best Wodehouse stories, this one positively reeks with humorous names (such as George Cyril Wellbeloved, Clarence's pig man), class humor (fat-headed upper class types being shorn), irony (the simple is exalted over the complex and pretentious) and never-ending humorous confrontations and contretemps. Save this book for the next time you n

Published by Thriftbooks.com User , 19 years ago
P.G. Wodehouse wrote yet another delightful tangled tale in this addition to the Blandings Castle saga. As usual, he weaves a celtic knot of plot in and around Blandings Castle, this time involving Lord Ickenham (a.k.a. Uncle Fred) and his young friend Bill Bailey (who of course comes under another name); Myra Schoonmaker and her father, James Schoonmaker; the Duke of Dunstable and his nephew, Archie Gilpin; Lavender Briggs, Lord Emsworth's new secretary; and the usual Blandings cast including Lord Emsworth, Lady Constance, and Beach. Two love stories interweave as well as once again a plot against Lord Emsworth's thrice-prize-winning pig, Empress of Blandings. Great fun!
Copyright © 2022 Thriftbooks.com Terms of Use | Privacy Policy | Do Not Sell My Personal Information | Accessibility Statement
ThriftBooks® and the ThriftBooks® logo are registered trademarks of Thrift Books Global, LLC