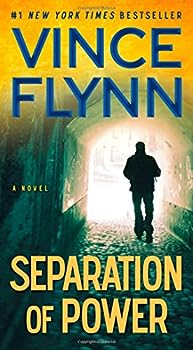 (Book #5 in the Mitch Rapp Series)

The #1 New York Times bestselling author of the electrifying Mitch Rapp series "knows how deliver action in his novels" (St. Paul Pioneer Press) and does so again with this thrilling follow-up to The... This description may be from another edition of this product.

Published by Thriftbooks.com User , 4 years ago
dylan obrien is my daddy

Another Winner For Vince Flynn!

Published by Thriftbooks.com User , 20 years ago
This is another good book from Vince Flynn.The CIA DirectorThomas Stanfield has died.Dr. Irene Kennedy has been nominated to be his replacement by President Hayes.Senator Hank Clark and other forces set out to sink her nomination.In the meantime Israel tell the United States that Saddam Hussein is close tobuilding an atomic weapon.Mitch Rapp is called upon to destroyIraq's plan.Once again you have a book full of nonstop action.There are many unusual twists and turns in this exciting book.The end of the book is a show stopper.Buy this book and read it.You will not be dissapointed.

An Excellent Continuation of a Fine Series......

Published by Thriftbooks.com User , 21 years ago
Vince Flynn's fourth political thriller continues with the same characters introduced in his second book, Transfer of Power, and one or two from his thrilling debut, Term Limits. Like in the previous two novels, the Iron Man, Mitch Rapp, is back to destroy the enemies of the United States and find out who attempted to kill him in book three, The Third Option. Separation of Power is a cut above its predecessor due to a number of intriguing subplots concerning Rapp's attempt to catch his attempted murderer; the confirmation battle of Dr. Irene Kennedy to helm the CIA; who wants to kill Rapp's former lover/secret agent; Rapp's relationship with Anna Rielly; and a few more that Flynn puts in to keep the pot boiling. Despite the fact that this novel is part of a series (and most novels like these lose some character development in the process), Flynn has written yet another superb political/military thriller. If he can avoid writing thousand page behemoths like Tom Clancy, Flynn will no doubt be King of the Technothriller. I am eagerly awaiting his fifth pageturner.

Published by Thriftbooks.com User , 21 years ago
Vince Flynn just gets better and better.I can't wait for the next book! To appreciate this book as much as posible it is best to have read Transfer of Power and The Third Choice which very nicely keep us up to date with the major characters in the story.I have even gone back and bought Term Limits which was his first book. I don't know if it is essential to go there, but this effort has been criticized by some and I am enough of a fan of the author and an aspiring writer that I would like to see for myself how the first one went.Enough of that. This book is so good that I realy just want to say that and hope it will be enough to interest you to buy it. Nah! All the good people and some of the bad from earlier books ae moving forward with their lives. Mitch Rapp, who is certainly a very important part of Transfer of Power only continues to grow in importance as the books unfold and in this book he is at his zentih. I continue to pray that we have a Mitch Rapp in the employ of the CIA. We all should, but I suspect that the last eight to ten years have cost us dearly in that regard.Suffice it to say that Flynn lays out all of the trip wires that are there in this day and age and very deftly manuvers around them. If you are into red, white and blue these days, you will love this book. If you are one who has reservations about what we are doing in response to 9/11, you will find instruction in this novel. If you are sitting in Bagdahd, working on weapons of mass destruction, you will pray this is just a figment of the authors imagination. In any event, this book is so worth reading that I can not recommend it enough.

Published by Thriftbooks.com User , 21 years ago
This is the latest novel with Mitch Rapp as the hero. Irene Kennedy is going through her confirmation hearings to become the first female Director of the CIA and the wolves are out in Washington! Add that to Saddam building nukes, the Mossad playing games, and Mitch's love life in chaos, you have a great thriller that you won't want to put down! I hope to see more like this soon from this excellent author!
Trustpilot
Copyright © 2022 Thriftbooks.com Terms of Use | Privacy Policy | Do Not Sell My Personal Information | Cookie Preferences | Accessibility Statement
ThriftBooks® and the ThriftBooks® logo are registered trademarks of Thrift Books Global, LLC