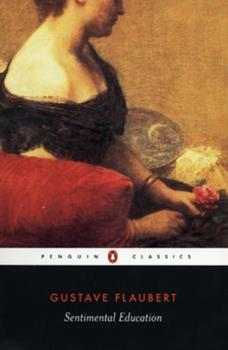 Frederic Moreau is a law student returning home to Normandy from Paris when he first notices Mme Arnoux, a slender, dark woman several years older than himself. It is the beginning of an infatuation that will last a lifetime. He befriends her husband, an influential businessman, and their paths cross and re-cross over the years. Through financial upheaval, political turmoil and countless affairs, Mme Arnoux remains the constant, unattainable love...

Published by Thriftbooks.com User , 17 years ago
There is a special value in "Sentimental Education" that puts it among the highest class of novels. Better than Thackery, better than Stendhal, better than Austen, better than Balzac, better than Eliot, it offers something that Dickens or Melville, for all their virtues, do not provide. Here is a portrayal of a society, where the author looks deeply and thoroughly--and does not flinch. The contrast with Thackeray, whose sarcasms and coldness cannot hide a fundamentally conventional mind, is obvious. But there is also not the self-satisfied amusement with its own proprieties that we see in Austen, or the something for everyone that we see in Trollope, or the sentimentality so obvious in Dickens, or the way the captain goes on and on in "Billy Budd" saying he has no choice but to execute the fundamentally innocent Billy, or the fundamentally abstract obsession with unity that we see in Eliot. Here we see a story of a venial, petty monarchy, the hopes and illusions of the second republic, and its suppression and replacement by a new Napoleonic regime. If many of the friends of Frederic Moreau are shallow and complacent in their "democratic" phase, that does not alter their fact that their opportunism and moral corruption is a gruesome business. It does not remove the shock on reading the death of the one truly decent person in the book, murdered by a dead ringer for David Horowitz. This is not a popular book in the English speaking world. Frederic Moreau does not have the dignity and moral weight that a moralistic criticism demands. Much of his time is spent wondering how to seduce Madame Arnoux or how he should snag "The General." Of course, French 19th century fiction is distinguished from its Victorian counterpart by a greater degree of sexual realism. But the point of the book is not to discuss Moreau's apparently aimless life. Instead the point is how there are alternatives that would give his life meaning, whether it be love, artistic creation, professional achievement, politics and a genuine interest in civil society. Moreau fails to achieve some of these because he does not have the energy to get them, he fails to achieve others because he runs out of time, he fails others because he is betrayed by people he trusts, and he fails others because otherwhelming forces remove options from the tables. Moreau does not fail simply because he is weak, he fails for reasons that most people fail. And in that sense Flaubert shows an exemplary realism. And of course, Flaubert is the master stylist. Who can forget his description of the wealthy opportunist Dambeuse "worshipping Authority so fevrently he would have paid for the privilege of selling himself." There is the perfectly controlled realism: we do not have the cheap tricks and garish effects of middlebrow writers. But we still have the poetic and the imaginiative: "the smoke of a railway engine stretched out in a horizontal line, like a gigantic ostrich feather who tip kept

Published by Thriftbooks.com User , 17 years ago
Smoke billows from a Seine river steamship, flags flap in a spring breeze, a young man catches a glimpse of the woman that will serve as a life long romantic love. These images float across the opening pages of "Sentimental Education," Gustave Flaubert's portrait of mid-19th century Paris society.I'd read this book in college and when I recently slogged through the horrific "Da Vinci Code" I decided to reward myself by re-reading "Sentimental Education," a novel that evokes the spirit of an age, etches a portrait of a culture and delves into the heart of human fraility and grandeur.Twenty years ago I was intoxicated by this book, believing it to be the perfect novel, populated with distinct and realistic characters but now I feel that the characters are the weakest aspect of the book. There is something sour, cheap and small about all of them that makes them seem more alike than different. Flaubert was adept at catching the nuances of character flaws but failed to recognize that people can also have great heart, courage and self-awarenessBut the set pieces are stunning, unmatched by anything else I've ever read.Standouts are the all-night costume party of at Rosanette's with the glorious descriptions of the interiors, costumes and the personalities, Flaubert's take on the historic June 1848 with every sordid, petty, chaotic detail preserved and Monsieur Dambreuse's funeral complete with detailed descriptions of purchasing tombstones and the look and feel of a mid-19th century cemetery.Flaubert published "Sentimental Education" in 1869 after tinkering with the novel for more than twenty years. Like the impressionist art movement that arose at about the same time, the book remains fresh and alive because Flaubert focuses on capturing the details of the world around him that make it come to life in a richness of sight, sound, smell and feel that I don't think will ever be equalled.

Published by Thriftbooks.com User , 17 years ago
Frederic Moureau is a young man who wants it all... he wants the great romantic life, the social commitment, the financial success, the respect from everyone. This is the perfect example of what a novel is, if we are to accept Lukacs definition of it as the epic of the ages with no gods. There is nothing in this young man's life that gives a sense of totality to his world... there are many ways to be followed, but none to actually enclose in itself the sense of the eternal horizon of time. As he meets Mme. Arnoux, one could think, by the way he thinks about her, that she is going to be his entire world, but she is not... a few moments later we find him completely devoted to the cause of his friends, and later, to his physical involvement with a woman of doubtfull reputation... etc, etc. Along with his discovery of the world and its mechanics, he submerges in his own feelings, without really finding a north to any of his purposes in the external world (be it the world of social dynamics, ambitions, of affections and of responsabilities). His journey begins when he leaves his birthplace in the country and goes to Paris. In this travel, he knows Mme. Arnoux, and then, her husband, with whom he relates very well. Once established in Paris, he keeps this relationship, in hope allways to see the wife.From that point on, he will get involved in projects of papers, bussiness trades, purchases and social awareness. As the revolution falls upon the city, he tries to get a role in it, but he is soon rejected because of his previous (and allways ambiguous) relations with the burgouise spheres of Paris.The end of the novel will have him remembering his awakening as a man: he goes to a house, where he can pick from a group of women... but the horizon of possibilities offered by all of them frighten him and he ends up running away... being followed by his best friend; who will allways have to run following Frederic... the one with the money.

Give me more of that Sentimental learning

Published by Thriftbooks.com User , 23 years ago
I agree with a reviewer before me that this masterpiece is overshadowed by Bovary and, for the life of me, I can't understand why. The main character is better, Emma Bovary's complaints do little to outshine Frederic Moreau's idle lifestyle. It's wonderful--the language, the descriptions and, most of all, the way in which Flaubert can make the reader see how utterly wretched the "upper class" lifestyle is. Excellent, from beginning to end.

Published by Thriftbooks.com User , 23 years ago
"The Sentimental Education" is an absolutely brilliant novel. That Flaubert's most famous and most highly regarded novel is "Madame Bovary" is astounding to me. That novel has many failings, whereas "Education" has none. The writing is the best you'll ever read, the story is touching and deep and rich, the charcters wonderfully drawn. And the last paragraph in the novel is both hilarious and endearing, and makes it a novel that is brilliant to the very last word. I can not recommend this novel highly enough. It is somewhat of an overlooked masterpiece (overshadowed by the lesser "Bovary"). One critic said that the reason "Forrest Gump" (the movie version) did so well was that "it dealt wonderfully with unrequited love, something we can all relate to." Well, "Education" is about unrequited love, and it deals with it with 100 times the power that "Forrest Gump" did. The novel also includes a revolution and the Parisian social world. "THE SENTIMENTAL EDUCATION" HAS EVERYTHING!!! When Woody Allen listed the "things that make me happy to live," one of the things he listed was "`The Sentimental Education' by Gustave Flaubert."
Copyright © 2020 Thriftbooks.com Terms of Use | Privacy Policy | Do Not Sell My Personal Information | Accessibility Statement
ThriftBooks® and the ThriftBooks® logo are registered trademarks of Thrift Books Global, LLC