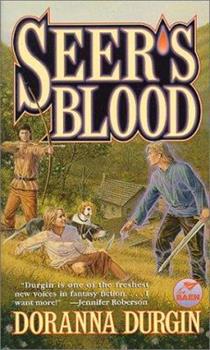 Blaine Kendricks thinks the strangers have come to Shadow Hollers to trade, but he is dead wrong, and as the invasion proceeds, he is recruited by a magician to participate in a dangerous game.

Published by Thriftbooks.com User , 19 years ago
Blaine always wanted more to her life than what was typically expected of females in Shadow Hollers. When she sees a group of strangers in her town and meets a man named Dacey, she gets her wish (although not exactly in the way she had hoped). Dacey is one of the last people of the seer's blood and the only one who knows how to stop the invaders, who are called the Annekteh. Together, he and Blaine must battle the Annekteh in order to save her family and friends.The characters in Seer's Blood were likeable and easy to relate to. Blaine refuses to conform to society's expectations of women. It's refreshing to see a strong lead female character, in addition to a strong male. I felt the same emotions as the characters throughout the book. In addition, the setting was wonderful (obviously, Doranna Durgin has done lots of research on Appalachia). The only drawback to this book (and the reason I gave it four stars instead of five) is the use of the dialect. Many of the words are similar and therefore easy to mix up (personally, I had trouble figuring out what some of them meant, too). As a result of this, I basically had no idea what was going on for the first few chapters. My recommendation for other readers is to learn what the terms mean early on. However, aside from all of my personal confusion, everything about Seer's Blood was great. Durgin is a very talented author and I hope to read more of her books soon. This was one of the best fantasy books I've read in a long time!

Published by Thriftbooks.com User , 20 years ago
Strangers have arrived in Shadow Hollers in search of the old magic in the hills, magic that has been long forgotten by the people who live there. But one man, Dacey Childers, the last of the lost seer's blood, has also come to Shadow Hollers to warn the people of the coming danger that the strangers, the Annekteh, pose. No one believes him except for one young woman, Blaine Kendricks, who is soon drawn into his magic and his adventure. It is up to the two of them to save the Hollers from the Annektah, the Takers, who intend to steal the magic from the mountains and to make the magic, and the land, their own.SEER'S BLOOD is a fast-paced magical adventure. Doranna Durgin imbues her characters with heart and soul, making the reader care about them in ways that are rare in fiction. Ms. Durgin gets better with every book she writes. Each new book by this author is a must read. SEER'S BLOOD is the first book in years that actually made me cry. The climax of the book is heart-rending. You can feel the pain of the characters as they carry out their goals, despite the pain and suffering it causes, trying to save the Hollers from the Annekteh. Some people, when reading this book, may find that they have some trouble with the dialect used to reflect the Appalachian region in which the setting of this book was framed. I did, at first, but as I got deeper into the story, the dialect started to sound natural to me and I found that it added to the overall flavor of the book, enhancing the experience of the book.

Published by Thriftbooks.com User , 21 years ago
This Book is very well written and is full of rich deep color, that allows a reader to stand in the middle of the field and be apart of the whatever is going on. Although this book does have familiar themes found in other Durgin books, this one does deivate and gives you another sit to her ability to write.Seer's Blood take place in a world were 90% of the world (the good guys - think 1600's) is about to rediscover Magic. While the other 10% (The bad guys - If you have ever seen the movie Fallen with Denzel Washington, the bad guy is book and movie have the same power to touch and take over a body) knows about it and uses their brand of magic to dominate the world. In fact the want to control the re-emerging magic.The book is fast pace, but it does get confusing at times. The action is most believeable. This book like Durgin other books address the issue of how one woman breaks the chains that bind her gender so that she can save it.

Another fine adventure in a well done world, not quite ours.

Published by Thriftbooks.com User , 21 years ago
Sometimes you stay at home but adventure comes to you.The Annekteh want something, and they think the seers who stopped them last time are gone and their records destroyed.This isn't quite true, two remain to oppose and lead - but first they must learn and then they must fight and even should they win success or victory their world will have changed.If you enjoyed Wolverine's Daughter (also recomended) you should enjoy this (sample chapters of both at Baen.com).
Copyright © 2020 Thriftbooks.com Terms of Use | Privacy Policy | Do Not Sell My Personal Information | Accessibility Statement
ThriftBooks® and the ThriftBooks® logo are registered trademarks of Thrift Books Global, LLC