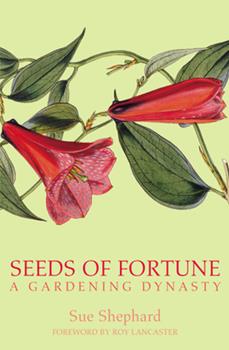 For fans of The Tulip and Orchid Fever , a captivating account of big business, adventure and family intrigue in the horticultural world. For over a century and across five generations, one Scottish family pioneered the introduction of hundreds of new plants into gardens, conservatories and houses and became the foremost European cultivators and hybridizers of their day. The story begins in 1768 when a Scotsman named John Veitch went to England to...

Published by Thriftbooks.com User , 18 years ago
This is the story of the Veitch family who, for five generations, pioneered the introduction of hundreds of new plants into the homes and gardens of England and Europe.John Veitch, the patriarch of this family of nurserymen, left lowland Scotland as a lad for London where he learned the nursery business. He then moved to Exeter where he was employed to design and later maintain the landscape of a grand park belonging to Sir Thomas Dyke of Acland. On the recommendation of Sir Thomas he designed other parks around the country and, still in charge of the Acland estate, grew trees in his own nursery and sold them to his clients. His son, James inherited this entrepreneurial spirit and flair for plant propagation and he opened a new, larger nursery in the centre of Exeter. James' son, James Junior, later built a large and fashionable nursery in London to expand the family's plant empire. From these nurseries the Veitches sent out plant hunters to North and South America, Japan, China, India and the South Seas. Their most famous collectors were the brothers William and Thomas Lobb who overcame immense difficulties to discover unknown plants and send them home to England. Once in Veitch's hands they were coaxed back to health after the rigors of the voyage, propagated and likely also hybridized - the Veitches produced the first orchid hybrid.The story of the Veitch family, and the Lobbs, sheds light on a fascinating era in garden history when the variety of plants available to the gardener was expanding rapidly and gardening itself expanded to the growing middle classes in the cities. The book is well researched and thorough, although one gets the sense that the writer was slightly swamped by her topic and included rather too much detail. It makes for a somewhat tedious read and has the feel of a thesis, rather than the thoroughly good tale it might have been.
Trustpilot
Copyright © 2022 Thriftbooks.com Terms of Use | Privacy Policy | Do Not Sell My Personal Information | Accessibility Statement
ThriftBooks® and the ThriftBooks® logo are registered trademarks of Thrift Books Global, LLC