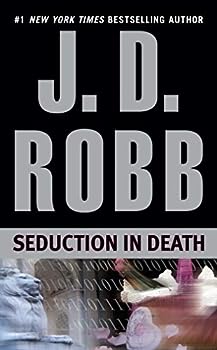 From #1 New York Times bestselling author J. D. Robb comes a tantalizing novel in the futuristic In Death series, as Detective Eve Dallas searches for a Casanova killer with a deadly appetite for... This description may be from another edition of this product.

A little change of format but a winner all the same!

Published by Thriftbooks.com User , 21 years ago
In this latest installment, Eve Dallas is investigating the serial murder of women who participated in on-line chat rooms, each A victim of romance that was a game set up for a deadly ending.This novel was of a different format then the last 12 as you know who the killer is early on. The format may have changed but the suspense, wit and character building sure did not! Can eve beat the killer at is game before anybody else is killed???J.D. Robb has the most wonderful skill of building her characters and this book gets better. Peabody and McNab continue to grow in their involvement and as main characters. Charles and Dr. Louise even grow as more important characters. This is Book 13 , which I have read them all, also read the two short stories and I cannot get enough! Way to go Robb you most certainly did it again!!!

Published by Thriftbooks.com User , 21 years ago
I've now read all 13 novels in the "in Death" series as well as the two short stories and I still haven't gotten enough of the main characters, Eve and Roarke. In this latest installment, Lt. Eve Dallas is investigating the serial murder of women who participated in on-line poetry chat rooms, each the apparent victim of romance gone horribly wrong.This novel is a little different than most of the others in the series in that you know early on "who done it". The suspense comes in wondering if Eve will figure it out before anyone else is murdered and in hoping Eve can beat the killer at his own game. In this novel, J.D. Robb re-introduces us to Charles Monroe and Dr. Louise DiMatto (tertiary characters from previous novels) and continues their character development. Peabody and McNab are also at it again with verbal sparring and miscommunication abounding."Seduction" is infused with taught suspense, laugh-out-loud wit, bad guys you love to hate, and a little romance thrown in for good measure. Please tell me there's more to come!

Published by Thriftbooks.com User , 21 years ago
I found this most recent of the "In Death" series by J.D. Robb to be one of the best yet. Once again, fans of the series enjoy the colorful and snappy dialog between Eve and Roarke, not to mention the curl-your-toes bedroom scenes that we all love! McNabb and Peabody garner a good and funny story line, and we visit with characters from previous books as well. Who doesn't chuckle over Charles calling Eve "Lt. Sugar!"This is a good, solid story with additonal character developement. Knowing who the killers are at the beginning of the story (a nice change for this series) doesn't lessen the impact and suspence of the book, but rather adds to the plot and gives the reader a thrill knowing the "baddies" before Dallas does! In an interesting twist, the reader can check off the clues as Eve works the case and puts all of the pieces together by putting herself in the killer's shoes. Once again, the delectable Roarke stands with her as her civilian consultant with Eve grumbling all the way!Eve and Roarke continue to grow together... accepting each other's quirks and foibles a little more each time, with more ease. Another a plus from reading such a wonderful series... I feel as though I am visiting old friends again! Kudos to Ms. Robb for another terrific story!

Published by Thriftbooks.com User , 21 years ago
Two sophisticated serial killers are stalking the women of New York via email. Or is it one man with multiple personalities? Tough homicide lieutenant Eve Dallas must solve the mystery quickly, before any more women are brutally raped and killed.In perhaps her toughest assignment yet, Eve must unravel clue upon clue to get to the core of the case. And it won't be easy. As she peels away each false identity of the murderers, another even more clever identity emerges. Each victim has been lured to her death by a so-called "poet," who just happens to share a love of art, poetry, the classics, and other intellectual pursuits with his online "soulmate. It is chillingly easy to disguise one's identity on email, especially if, in the case of this murderer, he has multiple accounts that lead to nowhere.Surveillance tapes and first-hand sightings of the possible suspect or suspects only compound the puzzle, as the killers are adept at face putty and other disguises, and so appear completely different each time they kill. In 2059, such appearance enhancers are all too available, as Eve well knows. When she needs a disguise of her own, she has to be almost literally hogtied as she submits to the "beautification" efforts of her dear friend, "mag" rock star Mavis, and Mavis's sidekick Trina. Those of us who know Eve et al. from the previous "In Death" novels tend to root for Mavis and Trina, as Eve's idea of beauty is primitive at best.This insertion of comic relief is a Robb trademark, and only serves to intensify the mystery beneath. The genius of it, however, is that with each little interlude such as the beauty session, we learn more about what makes the "In-Death" regulars tick, just as we would in a real-life relationship. Thus we are privy to the on-again, off-again, often hilarious romance between Eve's stalwart aide Peabody and her peacock-dressing boyfriend, detective MacNab. There is more nasty verbal byplay between Eve and her husband's stiff and unyielding butler, Sommerset. And we get to see Eve's onetime mentor and dear friend Feeney in some unforgettable pajamas. As always, new readers will enjoy these characters, who only serve to add color and depth to the story. But regulars such as I feel we KNOW these people, and while we follow the mystery, we are also treated to the ongoing saga of each of their lives. MOST satisfying!Nowhere is this more evident, of course, than in the deep and complicated relationship between Eve and her husband of one year, the brilliant and impossibly gorgeous billionaire Roarke. I have referred to their relationship before as fascinating, and it is...two strong, forceful people, each of whom have overcome unspeakable childhood horrors and emerged winners, must accommodate themselves to each other. We have watched as, in book after book, both Eve and Roarke, but especially Eve, have allowed layers of self-protection to fall away as they each learn to trust in the love they share. Theirs is not an easy relationship,

Ready to be Seduced?

Published by Thriftbooks.com User , 21 years ago
Let me start off by saying this, in my opinion, is the best Death book yet. The story is fast paced and best of all, all the secondary characters contribute to the story and many have storylines of their own.The story opens with Roarke off at the funeral of his old friend Mick and Eve trying to survive the night without him. As she tries to sleep, she finds herself dreaming of her father. Only this time the dreams go further than it ever has leaving her shaken beyond belief. Then the call comes, another homicide, another body, and another death. The man of their dreams is wooing young, single, attractive women in a chat room where they discuss poetry, the arts, and the finer things in life. Each meets him for drinks at a swanky, romantic spot to be safe and then finds herself sexually enamored enough to take him back to her apartment. He turns the lights down low, puts on romantic music, and throws rose petals on the bed. He does everything in his power to make it the most romantic encounter of her life. You see it will be the last thing she will ever know.I had wondered if Robb was going to let us down... Folks, I was not let down in the least. Yes, there is the usual blood and violence, the sex with Roarke, and we knew who was committing the murders fairly quickly?but what made this book for me was the use and revelations of the secondary characters. They played a prominent role in this book, which makes it worthwhile. Get ready to be seduced, not by murder, but the wonderful interactions that only Robb can produce.
Trustpilot
Copyright © 2022 Thriftbooks.com Terms of Use | Privacy Policy | Do Not Sell My Personal Information | Cookie Preferences | Accessibility Statement
ThriftBooks® and the ThriftBooks® logo are registered trademarks of Thrift Books Global, LLC