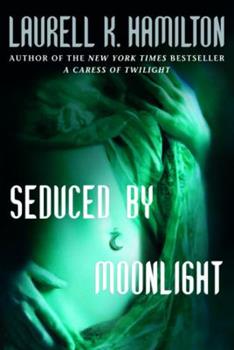 (Book #3 in the Merry Gentry Series)

Mixing fear and romance in equal measure, this book describes a world of gods, shape-shifters and immortal souls, unveiled in all of its magnificence and its treacherous deceits.

Published by Kimberly , 2 years ago
Very good condition. I cannot wait to reread this series.

Published by Thriftbooks.com User , 16 years ago
This is the 3th book in the series about Princess Meredith of the faerie Unseelie Court. The faeries are broken up into the Seelie Court of Light and Illusion and the Unseelie Court of Air and Darkeness. To become heir to the throne of the Unseelie Court the Queen has set both Meredith and her sadistic son Prince Cel on a race to become/get someone pregnant, to insure that the blood lines will survive. Merry while being a private investigator is trying to become pregnant. Due to the bloodlines dying out in her species you cannot marry unless you are able to get pregnant by the person. The Queen has given Merry a number of her Ravens to try to get pregnant by and you can see some of the starting to fall in love with her and her feelings grow for them. Something new is happening when Merry mates with some of her guards, they are coming back into their long lost powers. As she is turning them into what they once were no one is sure how far her powers will take everyone. Merry is also cementing her deal for alliance with the Goblins and the Sluagh. Merry and her entourage go back to the sithen when called by the Queen. When they get there they find that something is drastically wrong. Not only is there an attempt on Merrys life but the Queen is out of control. Someone has bespelled her and she is jeopardy of destroying her entire court. Merry is able to stop the coup attempt and they are able to determine who is behind it. Here again many have complained about the sex in the book. If you don't like it don't read it. There are a lot of other things going on during the 2 days, alliances are made, and coups are defeated. Be aware this is and ADULT book.

Seductive, sexy and so appealing

Published by Thriftbooks.com User , 18 years ago
SBM is amazing, if low on action. There are scenes that are a bit bloody or graphic, if that offends you, don't read this novel. There is growth and development in the male characters, which seemed very important to me, most notably Rhys and Frost. New characters are introduced and there is a lot of setup for the following novels. No it was not action packed like the first two, but all the action that occured was very intense. If the scene in Andais' room didn't do it for you...you have issues. It was worthy of rivaling the best action movies, not to mention the ball...However, if you have not read the previous two books, don't read this one, it will leave you confused as Ms. Hamilton does not spend half the book recounting the previous two(very much appreciated!)I got the book tuesday and today is Saturday and I've already read the book back to back three times. Probably also due to the fact that I'm having Merry and Anita withdrawl symptoms...

Time moves slowly for Merry and her MerryMen

Published by Thriftbooks.com User , 18 years ago
Like a good Chinese Dinner ...... Left me hungry an hour after I finished reading ...... Ok so it did only cover a couple of days, but when you consider that she had to get some of the events from "A Caress of Twilight" resolved, well she did clear some of that up; OK not all but we are closer to understanding what the "Nameless" did to each of them.Frost has always been a favorite of mine but I found his attitude tiring, but finding out about his true origin was great. There were surprises in store for some of my other favorite Raven's and the new guards will prove to be entertaining in the next title I'm sure. I am curious what the goblin twins will have in store.Not making it to the Goblin court or the Seelie court was disappointing in this book, but it is something to look forward to. I have been a fan of LKH for quite some time now. Taking on two series is a phenomenal task especially when they are in two different worlds. A book a year from each series is more than her readership should ask for but that is what she is attempting. I look forward to each of her titles with anticipation. I think some readers expect months/weeks to take place in one title and with Merry Gentry things are moving slowly. Afterall when you are immortal like the fey there is all the time in the world.

Published by Thriftbooks.com User , 18 years ago
I really enjoyed this book. I feel it's imcomplete because it stops so abruptly, but I love it. It sets up for the next book, probably wouldn't stand alone, but if you love the Merry series, it's a must read. I love the emphasis it places on the guards, and how Merry now has to sleep with some she doesn't like. Poor baby. What I like most about this book is that it's explained why she is getting these powers. They didn't just appear without reason like in AB. The destruction of the Nameless gave her something. Immortality I am thinking, and the Gods see her as a vessel now. And through her they wish to return power to the fey, but only should she be in power I think.

Published by Thriftbooks.com User , 18 years ago
I liked this book more than Caress of Twilight. Unlike the first two books, there's no mystery or investigation in this book. The first half of the book is filled with new and regained powerful magic for Merry and her men in Los Angeles. The latter half of the book takes place at the Unseelie court and is full of ten new guards, two new goblins, politics, a duel, assassination attempts, more scary Andais, and a great ending. My favourite part of Laurell K. Hamilton's books is that the heroine, by being an honorable, protecting, courageous person, gets ahead in life. Merry's responsible, humble, sheltering nature turns more and more guards to care for her more than the Queen. I liked the ending in particular because it was very tender and shows Merry's old guards easing the new guards into the very different culture of guarding Merry, which the old guards seem grateful for as a reprieve from the Queen's tender care. The book heavily hints that the next books in the series will cover their visit to the Goblin Court and the Seelie Court, and Merry keeping her bargain with Sholto. I've read it 3 times in 2 days, and now I'm re-reading the entire series again. I can't wait for the next one. Highly recommended.
Trustpilot
Copyright © 2022 Thriftbooks.com Terms of Use | Privacy Policy | Do Not Sell or Share My Personal Information | Accessibility Statement
ThriftBooks® and the ThriftBooks® logo are registered trademarks of Thrift Books Global, LLC