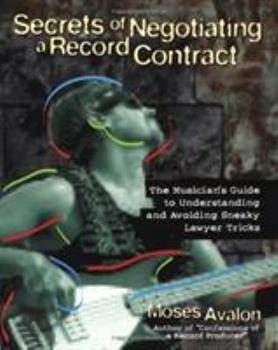 Secrets of Negotiating a Record Contract: The Musician's Guide to Understanding and Avoiding Sneaky Lawyer Tricks

(Book). To help artists avoid hidden agendas, this book exposes the multi-layered language of recording agreements crafted by major label lawyers. Clause by clause, it deconstructs actual contracts and translates them into "real English," presenting the original and decoded versions side by side. Focusing on artists' issues, such as advances, royalties and distribution, this revealing handbook explains the need for each clause, offers advice on negotiating...

Published by Thriftbooks.com User , 15 years ago
The music industry world ins an alien environment for most of the emerging artists and many need guidance to avoid scams and legal glitches, this book can be a good guide in defeating those lawyers that try to fool you into a deal. Despite the depth and professionalism , the book it isn't the best out there," Music Business & Entertainment Law Contracts for Indie Recording Artist, Labels, Songwriters, Composers, Producers, Managers and All Others in the Record Industry. Binder / CD-ROM set (PC & Mac)" by Ty Cohen is far better when dealing with all the aspects and it includes viewpoints from different men in the industry, and also includes clear and easy to understand examples

Published by Thriftbooks.com User , 18 years ago
Not only is this book (and it's prequel, "Confessions of a Record Producer") the real deal, so is the man who wrote it. I was so impressed by his first book that I contacted him as a consultant on a producer/artist agreement I was negotiating (I am a producer). My goal was to come up with something that was actually fair to both parties and Moses got us to that point quickly. His suggestions were works of innovation that surprised and satisfied everyone.I also attended his 2-day seminar which dissects recording contracts. Here he dispelled the many misconceptions I had about record companies and their contracts AND he helped me to understand what is really being said in these contracts (and it's scary!). He is not a lawyer, but one of the most insightful men I've met. Lawyers pay HIM for his advice. He REALLY understands contracts and explain things in a manner no one else seems to be able to do - it must be a sixth sense.. Highly recommended reading. Both his books should be permanent reference books for anyone in the music business. Besides, they're fun reads, unlike most other "how-to" music-biz books.

Staright to the point, easy to understand and insightful

Published by Thriftbooks.com User , 19 years ago
This book is easy to read. It goes straight to the point and gives you inside information so you can undestand everything. I recommend this book to any kind of person, including lawyers (like myself).

Published by Thriftbooks.com User , 19 years ago
Avalon fills the books with plain text translations of virtually every major clause in a standard record deal and makes it very easy to understand. He puts in plenty of narration and real world examples to let you see how each of these clauses can come into play and where loopholes lie so you won't just have to take your lawyer's word for really anything. Great book. Will save you tonnes of cash in legal fees and might end up saving your career. My only complaint is that he uses false names for all the stars he talks about in his examples to protect himself from being sued. But a lot of them are really famous so if you think about it you can figure a few out (I found the Michael Jackson one quite an eye opener). Definitely recommend it.
Copyright © 2020 Thriftbooks.com Terms of Use | Privacy Policy | Do Not Sell My Personal Information | Accessibility Statement
ThriftBooks® and the ThriftBooks® logo are registered trademarks of Thrift Books Global, LLC